Since it was Father’s Day yesterday, I reckon it’s as good a reason to write an appreciation post for the man behind some of Japan’s top male idols, in particular, Arashi. Who else but the man we love to hate, Johnny Kitagawa.

How do we love Uncle J, let me count the ways. Or rather, just one way:

HIS RULES ARE SO OLD THEY’RE SO ARCHAIC . 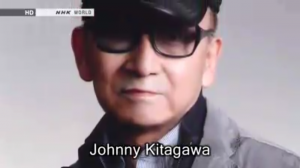 Imagine if Arashi have Twitter accounts. Every time say, Nino tweets his game scores, or Riida tweets his selca with a fish, it would be chaos. Though I would love to read Sho’s tweets on the news he covers or Aiba’s selfie with the animals he meets. But we’d probably have fans tweeting Jun: “ARE THE RUMORS TRUE? SPEAK UP!!!” I promise, I won’t be one of them.

But seriously, celebrities on social media are both a curse and a blessing. It allows us a peek into their lives but it also gives us some bone to pick. It’s a headache trying to “decipher” codes, when for all we know, there are no codes in a simple tweet. Or creating drama when there is none. Real life is already dramatic as it is, must we also create unnecessary dramas?

And I’d love some mystery from my idols. Thank you.

The stabbing incident at AKB48’s handshake event only illustrates the folly of having such events. There are all sorts of stories coming from these handshake events and one of the grossest I’ve heard involves the fans stopping by the bathroom before queueing up for the hand-shake. I leave it to your imagination what happens.

While I do understand that some fans like to be up close and personal with their idols, and that watching them in concerts is not enough, it has given rise to obsessive fans. These fan signs and handshake events have also become big business in boosting sales. Sure, it’s all part of marketing but it also takes advantage of the gullibility of fans and makes one question the credibility of the sales figures. But hey, that’s your money, who am I to say how you spend it, right?

So even if I can’t shake Arashi’s hands, especially Nino’s hamburger ones, I’m glad that Uncle Johnny does not over-expose them at the expense of their privacy, dignity , safety and sanity.

No unauthorized use of photos.

Photos of his talents are limited, not even for official sites of their movies and dramas (recently, there have been changes though). Remember the cartoon Domyouji in HANA YORI DANGO’s official website? Even some interviews published on the news media do not have photos so if you don’t know who Ohno Satoshi is, then you’d just have to make a guess or Google to know how he looks like. But see, Johnny’s is perhaps one of those few remaining establishments that are able to sell photographs, otherwise known as “shop photos”. These are physical photographs of the Johnnys whose sale often stir long queues in Harajuku even to this day, and in the era of modern technology.

Japan’s copyright laws also make it hard to search for Arashi videos on the Internet. That’s why fans scream hallelujah when they stumble on a video of a concert or PV, and HD at that. But the uploaders often have to resort to all sorts of tricks like using keywords and titles that are totally unrelated (one of the funniest I’ve encountered is “Green Onion” to an Arashi concert). Of course that can be no match to the automated visual/image matching technology that sites like YouTube uses. But it is this strict IPR that has made Japan’s music market top in the world and why Arashi can sell more than half a million copies of their latest DVD in Japan alone .

No taking of photos.

The almighty no-photo rule in Japan. This way, his talents are able to live their lives normally without fans suddenly springing up on their path and literally pointing a camera at their faces (yes, my pet peeve). The likes of Charlene Chua would surely have a field day taking close-ups of Jun’s orange peel face if this rule does not exist.

The almighty no-gift-giving rule. No, not even a counter at concerts or at the jimusho to drop off your gifts. This way, fans do not engage in never-ending upmanship trying to give the most expensive, unique or outrageous gift there is like a forest, a luxury car or designer-whatever. I can’t even give simple shirts or accessories to Sho and Jun and have them wear those so I can claim, SERIOUSLY, SAKUMOTO IS REAL.

But no matter how archaic these rules are, they make sense business-wise and keep fans sane too. And most of all, they give Johnnys a degree of protection from unscrupulous characters and crazy fans.

And don’t these rules remind us of a conservative, old-fashioned patriarch? Makes me wonder what it would be like in the jimusho once they change in management.

We owe you for picking five dorks from your pool of talents and making them debut on a cruise ship in Hawaii. Through all our complaints with your archaic rules and insular ways, we love you just the same. Even if most of the time I think of you as the Grinch, there are times you’re like Santa.

Speaking of Santa, and though Christmas is still six months away, can I wish for another Arashi Around Asia to celebrate 5×15? It’s about time you let your beloved dorks out into the world, again.