It’s FIFA World Cup season again and for every seasonal football fan like me, it’s a major event. I don’t follow football clubs but I cheer for national teams. I used to cheer for France and Portugal when Zizou and Figo were still playing. But since 2010, I have been cheering for Japan and South Korea.

I admit though that I’m more familiar with Samurai Blue than the Taegeuk Warriors and that is mostly courtesy of the Arashi connection. Some of Japan’s national football players have guested either on VS ARASHI or SHIYAGARE with the entire Nadeshiko Japan (women’s national football team) playing on VSA.

And it’s my dream that after this tournament, Samurai Blue will guest on VSA or SHIYAGARE, and I don’t mean the previous national team players (I have had enough of seeing Takeda on VSA, for some reason, I find him annoying) but the current line-up with Honda, Kagawa, Uchida and Hasebe, among others.

Incidentally, all of the above, except for Honda, have appeared on SHIYAGARE. Unless we count that Honda-lookalike that’s been making appearances on VS ARASHI in the last two episodes.

Hasebe Makoto and Abe Yuki
07.24.2010 SHIYAGARE
Hasebe is the team captain and he plays for Nurnberg while Abe plays for Urawa Red Diamonds. The two appeared in the Encounter with the Unknown segment. The main guest of this episode was Oguri Shun so most of the information online are on that. Download links here.

Kawashima Eiji and Uchida Atsuto
06.25.2011 SHIYAGARE
Kawashima is one of the national team’s three goalkeepers and plays for Standard Liege club while Uchida, one of the team’s heartthrobs, plays for Bundesliga. Read the recap here. Download links here.

Kagawa Shinji
07.14.2012 SHIYAGARE
Kagawa plays for Manchester United. This was a fun episode and what’s more, Arashi wear the football kit. Plus Sakurai gets to ask Kagawa the all-important question: Boobs or Butt? Read the recap here. It hasn’t been subbed yet but download links here. Watch the preview here.

And as the rule in Arashi, everything is decided through a game of janken (no, this is not about Boobs vs Butt). 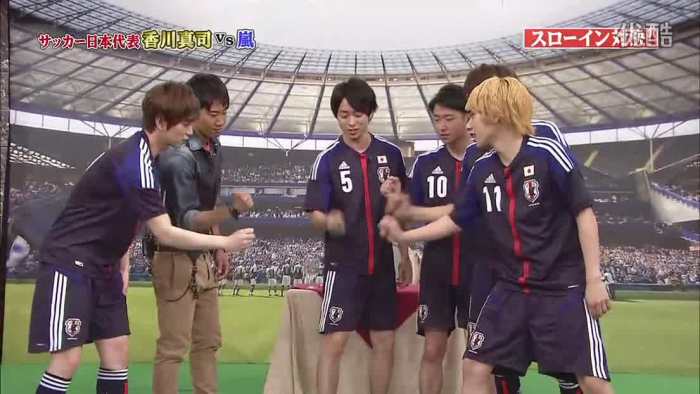 Here’s hoping that Samurai Blue will win against Greece and Colombia so they can advance to the quarter finals. Today’s match against Ivory Coast was just so stressful though Honda was really kakkoi when he made that goal 16 minutes into the match. Too bad Ivory Coast won. I feel Hasebe when he said:

“More than the opponent being better, we didn’t play the type of soccer we know we can. We have 4 days to prepare [for next match].”