This is not a review nor a recap as I suck at them and I wouldn’t know how to do so especially for a sageuk. Obviously,  history is not my best friend so historical/period dramas do not appeal to me. I have never watched even JEWEL IN THE PALACE because costumes and ancient language scare me.

But I am making an exception for THE THREE MUSKETEERS because… Jung Yonghwa.

This is Yonghwa’s fourth drama and the most different in terms of role. His previous characters Kang Shin-woo (YOU ARE BEAUTIFUL) and Lee Shin (HEARTSTRINGS) are close to the real Jung Yonghwa, leader and lead vocalist of CNBLUE. His Park Se-joo (MARRY HIM IF YOU DARE), a dashing, young and cool chaebol, is a cut from his idol image. 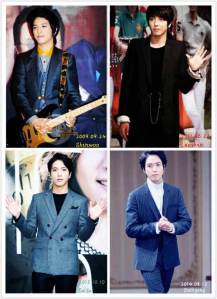 On the other hand, Park Dalhyang-ssi is a warrior from the Joseon era who struts around in heavy-looking robes and is that a wig? It is Yong-hwa’s most physically exhausting role to date and it showed in his weight loss and fatigue recently. But it may just be the role that would establish him as an actor and unload his idol baggage.

I know many of his fans, myself included, so badly want this drama to rate. I’ve had enough of people teasing him for his low-rating dramas as if those were entirely his fault. TTM’s first episode rated 2.8% and peaked at 5.1%, which for a drama being aired on cable, is already an achievement.

And despite my reservations about sageuk, I enjoyed the first episode and is already emotionally invested in the journey of Park Dalhyang from his remote province to Hanyang. Just as I’m hoping for the drama to get good ratings, I also hope that Dalhyang overcomes all the odds against him.

For some reason, the first scene of Dalhyang showing off his sword skills on the cliff when he bids his town goodbye, reminds me of the Jung Yonghwa who left his seaside city of Busan to realize his dream of becoming a musician in Seoul. I’m sure Dalhyang’s road will be full of ups and downs, just as the ongoing journey of Yonghwa and CNBLUE to reach the top of the world is too.

And not quite coincidentally, Park Dalhyang is part of Yonghwa’s journey as an artist too.

And it has not been an easy road to get to Park Dalhyang as his fans very well know. But the mere fact that he has been able to get to this point, despite having to divide his time between his music and acting, only shows that Yonghwa is dead set on  honing his craft.

As a musician (and someone who is good in sports), there is rhythm in his movements in the action scenes. But we all know that Yonghwa did not set out to be an actor so I am glad to see his improvement in this area, especially when he is acting alongside experienced actors like Lee Jinwook and Yang Dong-geun. For sure, he will learn a lot working with his sunbaenims.

Taking on the role of Dalhyang is also a wise decision because while there is a love angle in the first episode (and I don’t know where it will go and whether they will play this up in later episodes), the focus is more on his interaction with the so-called three musketeers, “bromance” if you may, and the adventures they will later go through. We get to see a fighting Yonghwa instead of the usual leading man character which would not have helped in losing the idol image that he so badly wants to get rid of. Despite the huge difference from his previous roles though, Dalhyang still offers that charm through his innocence and naivete enough not to isolate Yonghwa’s fanbase.

But of course, romantic lead or not, it does not mean we won’t get treated to scenes like this.

And I have to say, Dalhyang’s horse is definitely a scene-stealer. 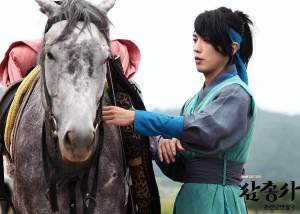 Overall, I love how the approach of the drama is light-hearted instead of taking the heavy melo road; the latter is what actually scares me off sageuk.

Because at the end of the day, I want my entertainment to be light. I just want to be able to kick back and relax and forget about all the news I deal with on a daily basis even though for some people, journalists do not have the right to their form of entertainment and be a fangirl. (I don’t know whether that mindset is due to narrow-mindedness or ignorance.)