It used to be a drama that would bring me to an idol but it was CNBLUE’s Jung Yonghwa that brought me to HEARTSTRINGS. That was six months ago.

Today, HEARTSTRINGS marked its third anniversary and while I’m new to the whole CNBLUE and HEARTSTRINGS fandom, I am amazed at the amount of love that it continues to get from fans. Do fans even celebrate the X anniversary of METEOR GARDEN or HANA YORI DANGO, two of the most iconic Asian dramas?

So yes, do you know HEARTSTRINGS? Yonghwa wants to know.

Yes, I do know HEARTSTRINGS.

Let us count in threes:

1. It’s Yonghwa’s first drama lead role and co-stars him with his close friend Shinhye. His character, Lee Shin, finally gets the girl here, unlike Shinwoo in YOU ARE BEAUTIFUL, which also co-starred Shinhye.

2. During the filming, Shinhye met an accident, cutting the episodes to 15. The accident prompted Yonghwa to take to CNBLUE’s Twitter account to cheer her up.

3. Yonghwa performs two songs in the OST: Because I Miss You and his “favorite song”, You’ve Fallen For Me. (Edit: Pearl said BIMY was composed by JYH; YFFM though, I’m pretty sure, was not; Edit 2: Laura S also pointed out that Yonghwa composed The Comfort Song, listen to it here.)

1. Of course, Lee Shin, who has set a very high standard for boyfriends: while he is arrogant and narcissistic, he is also the sweetest, most caring and considerate boyfriend, even sacrificing his own dreams for his girl. 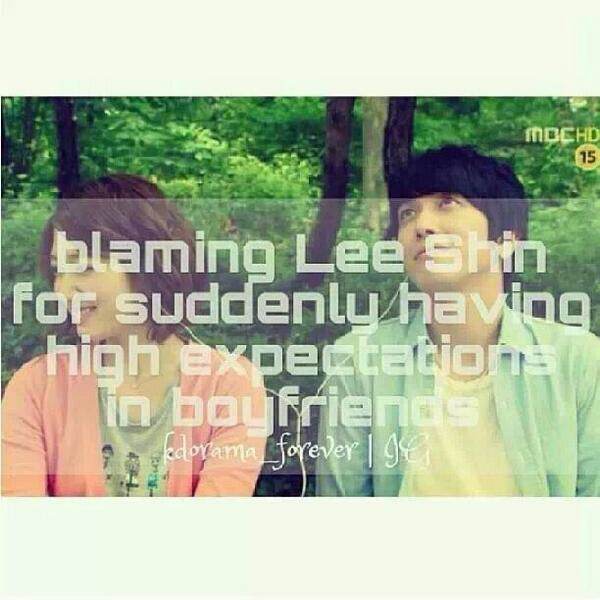 2. Grandpa. His arrogance and sarcasm coupled with his grumpiness made him an entertaining and endearing character.

3. The little sister Lee Jung-hyun. She was the perfect antagonist to the romance of her oppa and Lee Gyuwon, as well as the perfect foil to Grumpy Grandpa.

Though I’ve never seen such a roundabout way of confessing love to someone, no wonder, Lee Gyuwon misunderstood Lee Shin the first time he did it.

Aww Lee Shin, where to find someone like you?

It was Yonghwa’s choice to sing Lucky by Jason Mraz for that camp scene.

Their first “official” date with Gyuwon still wearing the tag of the brand-new dress. There’s one scene I love in this part, when Gyuwon bumps her head on the wall and Yonghwa adlibs as Lee Shin, asking the poor wall, “gwaenchana?”

Otherwise known as the I’ll-steal-you-away-from-Bo-Woon date, where Lee Shin takes Gyuwon to the park to let her hear his composition. They played the song with their gadgets and later listened to his mp3 player with Gyuwon stealing glances at him, prompting Lee Shin to quip: “Don’t just look at my face, listen to the music.” Narcissistic as ever but melts-in-your-heart Lee Shin.

3. The night at camp date

When Lee Shin stole her away from the rest of the students.

No wonder this was a favorite among Japanese fans in the 2012 HEARTSTRINGS fan meet. It’s just so sweet.

This has got to be the sweetest.

Inside Lee Shin’s room but was foiled by the little sister.

I personally felt it was a light kiss considering it was Lee Shin and Lee Gyuwon’s reconciliation scene (and ending at that) and should have been more passionate. Then I saw the gifs of the nose kiss and I was like Junhee the first time he saw his Natasha.

There are so many plot points in the drama that made me wonder if the writer took inspiration from real life. Like for instance that campus scene when Lee Shin holds the hand of a reluctant Lee Gyuwon as they walk through school, leaving fangirls (and fanboys) nosebleeding and dead in their wake. And when Gyuwon tied her hair scared of antis and violent fangirls and Lee Shin assured her “don’t worry, I’ll be by your side”. It can happen, who knows.

It’s also one of those dramas I can watch over and over again because as dramabeans said in its review, the chemistry of Yonghwa and Shinhye is just so natural. I have sworn off shipping more than a year ago but because of Yonghwa and Shinhye, I’m sailing a ship again. Their natural chemistry and real-life closeness  jumps out of the small screen and that’s what held the drama together plus the engaging performance of the ensemble cast, and of course, the OST.

[Looking forward to the release of HEARTSTRINGS THE MOVIE on September 17. Still wishing there would be English subtitles though.]

8 thoughts on “[blog] do you know HEARTSTRINGS?”