Every Arashi fan knows that the release of a concert DVD/BD is big because not everyone gets the chance to watch them live in concert. Even those who get that chance don’t end up hitting the lottery. And we don’t have the luxury of live streaming (Uncle Johnny will have a coronary) nor photo leaks or video clips unless they come from the morning news shows in Japan. And those are literally teasers. So we just depend on “concert reports” from fans who get the privilege of watching them live. One of my favorites would be yarukizero who writes complete concert reports and I wonder how she does it. Those reports are seldom accompanied by photos and videos (because where to get them? If you dare as take out your phone during the concert, you can kiss the concert goodbye) so you really have to use your imagination in visualizing what happened.

So the next best thing to watching Arashi in concert is, yes, through DVD/BD. That’s why it’s serious business for fans whenever release dates come around through the waiting period until it drops on our doorsteps. One also witnesses how some would zealously trace their shipments (I’m one of them) and if FedEx would want an effective marketing ad, perhaps it’s best to tap into the Arashi fandom.

And with their latest live concert release, did you know that you can actually order and buy LOVE online?

Kidding aside, LOVE was fast becoming my favorite Arashi album next to ONE. But after watching the concert, I think it is already up there. It offers a very diverse genre from pop to rock to jazz and everything in between and the concert even made it topnotch.

Sure, the set list also included other songs and what’s nice about Arashi is, you’d suddenly be surprised hearing a song that you won’t expect like Kotoba Yori Taisetsu na Mono or Eyes With Delight. Hearing those songs in LOVE quickly transported me back to 2004 and beyond when they were still gangly early “twenteens” trying to find their place onstage wearing kira kira costumes and wigs and eager to please the audience.

Juxtapose that visual with Arashi in LOVE and it’s easy to see how they’ve grown up. Well, they better did grow up the last few years, after all they’re in their 30s now and marking their 15th year. The kira kira outfits are still there but they look more like whimsical Valentino than from a cheap costume shop in Harajuku.

As @FireStorm_HK wrote in her concert DVD review, LOVE shows mature performers in Arashi. There still are the dance moves but they’re more toned down now compared to before. The focus was more on their interaction with the fans and I suppose it was also easier to achieve this since this was their return to Tokyo Dome after the massive Kokuritsu, which is now closed for renovation ahead of the Tokyo Olympics in 2020.

How do I love LOVE? Let me count the ways:

Love the opening and closing
Ai wo Utaou is a beautiful song but performed live, it is ethereal. The arrangement was so perfect in telling the story of love and coming full circle in the end. I also love it when instruments don’t get in the way of listening to the blending of their voices. Arashi are not the greatest singers but there are songs that showcase how beautiful their voices blend together including Ai wo Utaou and My Girl (which was part of the second encore).

Love the solos
I love the VTRs to introduce each of their solos (although I wish the actress playing Nino’s mother would have done away with that snout lol). I love Nino with guitar (heck, I’d love him on piano or with tambourine). But my favorite would be Aiba’s Yozora e no Tegami. It was very poignant especially knowing the message of the song and how it was written for his late grandfather.

Love the crack
The best crack moment for me would be in Rock Tonight in those plaid school uniforms and the NINOMIIII!!!! by Sho at the end.

Love the audience participation
Though it was not fully seen onscreen how the audience danced along to Funky, it must have been no mean feat to rally 55,000 fans to do it for that number (of course, thanks to the tutorial videos they released beforehand ne). And the look of accomplishment and satisfaction on the five senseis after the number was priceless.

(Note: According to MekMek, Jun mentioned in his greetings that the Tokyo Dome audience for LOVE was 60,000. I watched the raw version so I didn’t catch that–my Nihongo is still poor lol. Apparently, it was also in the news because it was the first time that Todome’s capacity was increased. Sugoi! Thanks MekMek for the info!)

Love the choreography
Favorites would be Sayonara de Ato de and Confusion. Oh the fun they had especially with Confusion. (One thing about Arashi though, if you’re looking for military precision choreography, that’s not them. Not to say they are all over the place but they dance according to their style. This group has never been about uniformity but unity.)

Love the shots
The drone cameras did their magic in showing a bird’s eye view of the dome. While the Kokuritsu concerts had the advantage of showing Shinjuku’s skyline in the background, the dome from above with the stage and the thousand lightsticks was just breathtakingly beautiful.

Love the production values
I am always amazed at the efforts that Arashi’s production team gives to each concert. They always introduce something new from the moving stage to the AR to the water screen–to mention a few–in previous concerts. Was it Terry Ito who said that Arashi is like Disneyland and attending their concerts is like going to a theme park. This concert is no exception when it comes to production values.

Love the stage
This time, we have that gigantic final stage of a revolving globe with images of Arashi on it. With Arashi no less literally at the top of the world. That was one epic stage.

Love Arashi
I guess this one is pretty obvious by now. But seeing them performing live, outside their variety shows, you still can see their different personalities. And that is even more obvious during the MC part when Jun is giving instructions on the Funky choreography and the other four are simply mucking around behind him, trying their best not to be caught by the strict and serious sensei. I love the Matsumiya moments and it was a joy seeing Nino acting just like a kid (well, he is #forever17 after all), Sho teasing the crowd (and that encore staple jeans of his with the Arashi kanji on the pockets), Aiba trying to wave to the farthest corner of the dome and Riida being bullied by his members. Yet despite the years and the changes in between, they are still down-to-earth and I won’t be surprised if they think that this thing called fame that they think is a dream may end soon they have to give it their all today. That’s who they are, never taking things for granted. And this is the Arashi that we all love. 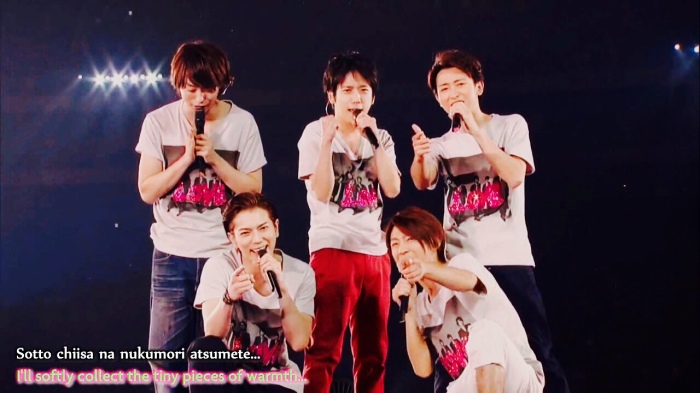 I always end up watching each and every concert of Arashi wondering how they will top this concert. But when the next tour comes around, I am always bowled over without fail.

And with their 5×15 concerts coming up, I wonder how will they top LOVE?

I am ready to be surprised and fall in love again with these five bakas.

[LOVE sold more than half a million copies–DVD/BD combined–on the first week since its release on July 30 and continues to be #1 in DVD sales on the Oricon charts as of this writing.]