Mention PIKANCHI and every Arashi fan would know what you’re referring to. The names Haru, Chu, Shun, Takuma and Bon are relevant just as Riida, Sho, Aiba, Nino and Jun are. The PIKANCHI films are part of Arashi 101 and while it does not make anyone less of a fan if they haven’t watched them, it would make fans appreciate the group more by going back to their early and dorky years.

PIKANCHI LIFE IS HARD DAKEDO HAPPY (Ver. 1)  was released in 2002, three years after Arashi debuted. The storyline was written by V6’s Inohara about five teenage boys who live in an apartment complex and their adventures together. 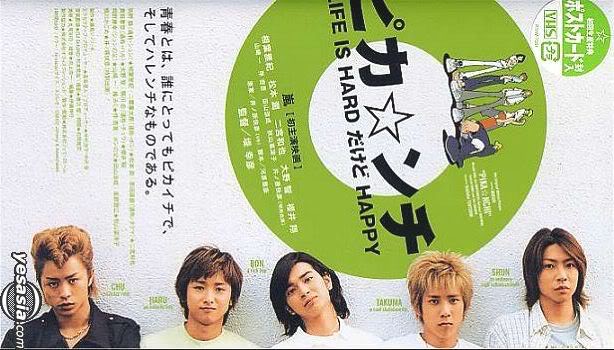 PIKANCHI LIFE IS HARD DAKARA HAPPY (Ver. 2) was released two years later and follows the lives of the five boys who are now in their 20s and confronted with more “grown-up” concerns. Chu (Sho) is married and earning a living, Shun (Aiba) is learning to crochet (LOL), Takuma (Nino)’s residential complex is about to be torn down, Bon (Jun) leaves the place and Haru (Riida) tries to help save it.

And now, 10 years later, the five who are in their 30s will reunite in PIKANCHI LIFE IS HARD TABUN HAPPY (Ver. 2.5). What has happened to them since we last saw them? 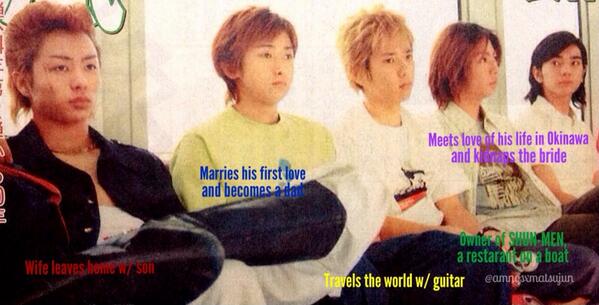 According to initial reports, Chu’s wife has left with their son, Haru married his first love, Takuma is still traveling the world with his guitar (and it is implied that he has sowed his wild seeds everywhere lol), Chu now owns a restaurant-boat and Bon meets the love of his life in Okinawa.

The confirmation of the film was accompanied by quotes from Jun and Nino that are worth re-quoting here because it shows how special PIKANCHI is to Arashi.

“These movies are special to us. On our 15th anniversary, we wanted to fool around one more time… We want to make sure people know why it’s Ver. 2.5. We hope it can foreshadow the Ver. 3.0 that we hope will become a reality.” – Jun

“We hope that these guys [their characters] can continue to reunite from time to time… This movie was done on a whim, so it’s loosely put together.” – Nino

Arashi and their whims… but thank you Arashi-san for bringing back your five onscreen dork doubles. It may just have been a matter of time. I blogged about this two months ago after watching a clip promoting the release of the PIKANCHI DVD and how they talked about doing another sequel in 10 years’ time. The clip is made of crack and while Jun sounded the least keen in doing another PIKANCHI film, well, here they are. Perhaps to Arashi themselves, it’s not only looking back at where they came from, but bringing their roots to where they are now. It’s also a good chance for new Arashi fans to take a look at the group’s history.

They said they will start filming middle of this month but they must have started earlier since Jun was spotted in Okinawa a couple of weeks ago. Unless he was location-hunting then.

And since it’s not a “full version”, there won’t be a single released as the theme song (they’d probably use Pikanchi and Pikanchi Double) and it will be shown at the Tokyo City Dome from August 1-31. Tickets are on sale starting July 13.

ARASHI BLAST IN HAWAII and now PIKANCHI 2.5… though Arashi said they want their 15th year celebration to be low-key, it can’t be that they won’t do anything to mark it. Being together for 15 years is an achievement, especially if they haven’t fought in all those times. Not to say it’s been smooth-sailing for them because it certainly was not but perhaps one of the secrets to their success, aside from hard work and devotion to the group (Arashi are the biggest fans of Arashi themselves) is that they were not sidelined by infighting and group politics and that allowed them to focus their energy into working for their dreams.

And with PIKANCHI 2.5, it’s one check on my 5×15 wish list. While I wished for a documentary, I’m more than happy to see them together again on the big screen. I mean, technically, since I doubt if I’d be flying to Tokyo for the PIKANCHI 2.5 screening… unless of course there will be a 5×15 concert tour, which is still impossible since that would be like winning the lottery literally. So I can only hope for another Arashi Around Asia. Onegaishimasu.