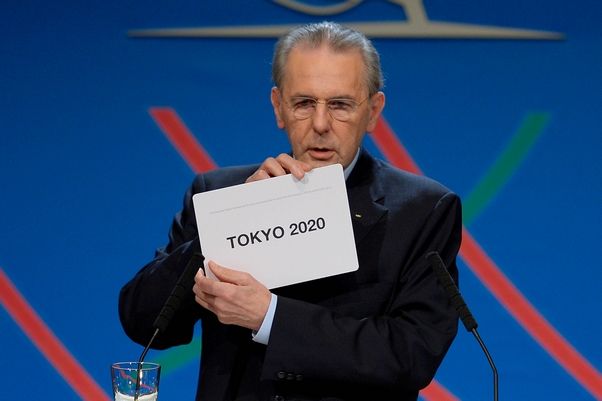 I was staring at that logo in a story earlier when it struck me. Chotto matte, isn’t that… one-two-three-four-five… masaka, isn’t that Arashi’s colors? In contrast to the official Olympic colors (as seen in the Olympic logo below) that leaves Matsujun out with his purple, Tokyo’s candidate logo had Ohno-Sho-Aiba-Nino-Jun written all over it. Bear with me, that’s my Arashi-addled mind talking.

I almost thought that those Japanese officials with verbal diarrhea would jeopardize my favorite city’s bid to host the 2020 Olympics. I’m glad IOC decided to award the honour to Tokyo and not to Madrid or Istanbul.

Look at those happy faces led by PM Shinzo Abe himself: 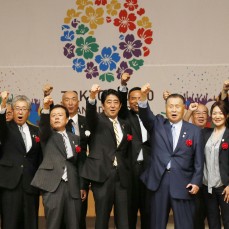 Tokyo has hosted the Summer Olympics in 1964, thus the National Stadium, otherwise known as Kokuritsu (where Arashi has been holding sold-out concerts for six years in a row this year) was built. It has made a bid to host the Games five times, succeeding on the third and fifth try. It hosted the Winter Olympics twice: in Sapporo (1972) and Nagano (1998). More facts here. Here’s the venue plan, that was cited as one of the reasons why IOC picked Tokyo as the winning city.

Meanwhile, I just need to point out this photo, there’s the Arashi colors again in the graphics.

I hope it’s a sign of what every Arashi fan is hoping for. By the time Olympics 2020 comes along, the Arashi members will be in their late 30s. I would really love to see them at the Games in one way or another. (There was a joke going around today that Uncle Johnny has begun planning the opening ceremony of the Olympics; leveling with Zhang Yimou? lol!) I’m curious how the baka boys will do Arafes this year at Kokuritsu before it closes for renovation. It has to be grand, deshou? This is how Kokuritsu will look after the renovation, designed by UK firm Zaha Hadid.

This post is ranked in Tokyo’s Olympic bid logo, the five Arashi colors!