[Many won’t like some of the things I’ll say here. Sorry not sorry.]

I watched MUSIC STATION SUPER LIVE SPECIAL 2014 (Japan-Asahi) and KBS GAYO DAEJUN (Korea-KBS) at the same time last Friday. Obviously, I was tuned in for Arashi and CNBLUE. And watching music shows simultaneously has never been that interesting because of the comparisons and the stark difference I saw.

Both shows were year-end specials. However, MUSIC STATION is a weekly music show, imo the top music show in Japan that gives you an idea on which artist is ruling the charts for the week, for instance, and where foreign artists make sure they appear on when they promote in Japan; on the other hand, the KBS one was an annual year-end special more like in the tradition of NHK KOHAKU.

Both shows featured what they deemed as the year’s achievers in the music industry, or so it seemed. But the similarities stop here.

Let’s look at the opening.

The number of groups/artists that perform at MSSL is just enormous with 20 to 40 participating every time (consider that Exile is like a batallion so just imagine the number of people onstage). Most groups had to stand in a single file (like Arashi; Neen, I could barely see you! but hey, they were placed beside the legendary X Japan).

For KBS, there were at least 20 artists/groups? There were several collaborations across groups too but I noticed an overdose (pun intended) on EXO collaborations though I can’t blame them, after all, there are 10 members of the group, might as well take advantage of their participation.

What is more interesting for me though when it comes to smorgasbord shows like this where the industry’s top stars are present is the politics involved. Who comes out first (for MSSL, it was B’z, this year’s album chart topper, followed by SMAP (an idol group legend), Mr Children and Arashi (Hamasaki Ayumi came after them, so Arashi was sandwiched between their senpais); X Japan was the last to be introduced though they were not the finale performer (that was Exile). Not all artists had airtime in the intro (much more in the extro); Tamori and Ayaka only had repartee with B’z, X Japan, SMAP, Arashi, Mr Children, Ayumi-chan and Exile in that order.

According to @ArashiTsu, Arashi’s portion (short interview with Tamori and Ayaka before they went on stadby and the three-song medley) took 12 minutes of the 50 minutes for the 10 JE groups present (MSSL was four hours). They were third to the last performer. There was a time though that even in Johnny’s new year countdown, Arashi had the shortest airtime… but I digress.

What I’m saying is, everything we see onscreen from the opening to the ending has been polished but imagine the maneuverings behind the scene. The politics of entertainment would really make for an interesting thesis.

Let’s look at the hosts.

MSSL was hosted by Tamori and  Hironaka Ayaka (Asahi announcer) as usual. KBS was hosted by 2PM’s Taecyeon, SNSD’s Yoona and Lee Hwi Jae, two idols and a seasoned host. 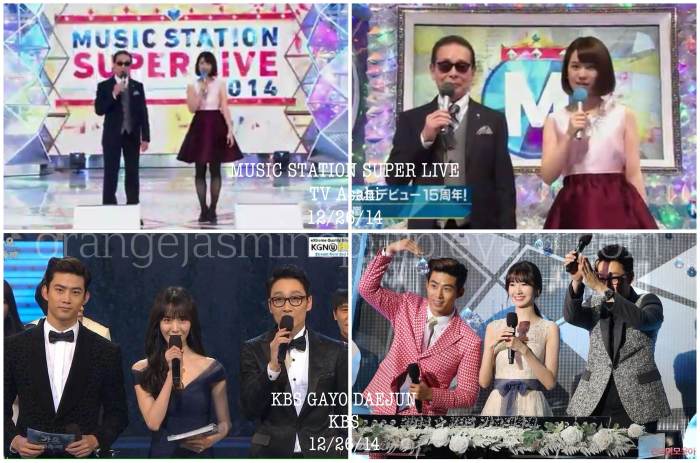 The usual format of MSSL is a set with open benches where the hosts and performers sit together. This time though, Tamori and Ayaka did their brief interviews on a side stage while standing and right before the artists perform.

For KBS, the three hosts stayed behind a podium throughout the show (except for opening and ending), which kind of made it look like a school program.

Tamori may not be an idol (unless we mean ojisan idol in the same level as Takeshi Kitano) and while Ayaka can pass for an idol group member, they’re seasoned hosts and I like their no-frills hosting and small talk because sometimes it does offer interesting tidbits about the artists, even though it’s scripted. I can’t say the same for Taecyeon and Yoona (who spent most of her time nodding her head and smiling cutely as if she was in some idol audition). Thank god LHJ was there but he barely made waves.

MSSL was like heaven for a music fan, regardless of genre. There were idols like Arashi and AKB48 and singers like Yuzu and Aiko alongside metal/rock bands like X Japan and L’Arc en Ciel. It’s common in Japanese music shows to see a merry mix of all types of genres from pop to rock to enka especially during specials like MSSL; we see that in full display during KOHAKU. And it’s a good education for people like me whose exposure is mainly pop and idols because it introduces me to other types of music and singers.

KBS, on the other hand, was a showcase of one idol group after the other. Sure, there were collaborations in between and there were tributes too. But the thing with K-pop, it is so hung up with “concepts” that was very evident with that red carpet wedding concept. Sometimes you wonder, is it about the music or is it about the concepts, and yes, the “visuals”? Of course, there’s nothing wrong with having a “theme” but it does give the impression that people are so obsessed with concepts they forget about talent and music.

MSSL proceeded smoothly like clockwork, it has mastered the art of music shows. You blink and you miss something interesting (I missed the performance of Yuzu because of streaming problems, no thanks to someone stupid enough to publicly share the link on arama).

I kept my TV on KBS World but most of my attention was on MSSL. I would check the screen every now and then and I see another idol onstage. Sorry not sorry but they all look the same to me so I couldn’t differentiate and the production numbers were mostly a duplication of the previous one I felt I wasn’t missing anything even if I took a nap.

It wasn’t all for naught though. Sometimes, watching music shows like this is like window-shopping. You never know if something interesting will get your attention. In this case, I discovered Kobukuro’s Ima, Sakihokoru Hanatachi Yo and Infinite’s Back. At least my playlist gets expanded occasionally and it’s not all Arashi and CNBLUE.

For MSSL, Arashi performed three songs from member dramas: GUTS! (Nino’s Yowakutemo), Meikyuu Love Song (Sho’s Nazotoki) and Daremo Shiranai (Ohno’s Shinigami-kun). Btw, Ohno’s was the only Asahi drama of the three. They rearranged some of their dance and moved from the main stage to the mid stage and the high stage to get closer to the audience. As someone on Twitter said, no matter how many times you watch Arashi perform, they always bring that happiness vibe.

On the other hand, I love the arrangement CNBLUE did for Can’t Stop in KBS. I liked their “stage” too because it gave a good view of all four members, and not Minhyuk always hidden at the back. If not for CNBLUE, the KBS show–and any other idol-riddled show for that matter–will look more of the same dish served course after course until you suffer indigestion. To put it bluntly, they don’t belong in an idol show but their fame is their curse so I guess we just have to suck it in and amuse ourselves with other things while waiting for their performance every single time.

Now looking forward to NHK KOHAKU, but not really MBC’s GAYO DAEJUN because I can already predict the same menu.

Between Japanese and Korean music shows? Japanese music shows win hands down for variety, content and production value, concepts and visuals aside.

14 thoughts on “[blog] J vs K: the battle of Japanese vs Korean music shows”