Sometimes I wonder if these guys are comedians or stuntmen, instead of idols who need to look kakkoi 24/7 with not a single strand of hair out of place. And watching the 20140508 BET DE ARASHI, that VS ARASHI special, has made me admire them even more, if that’s at all possible considering the utter devotion I have for these five bakas.

As Aiba would say, “entertainment dayo!”

Yes, the things that Arashi would do for the sake of entertainment. As if the public humiliation they had to endure in their early years was not enough, they still allow themselves to be subject to very public forms of torture 15 years, 20 million singles and almost 8 million DVDs of sales later. All in the name of variety shows.

In this BET DE ARASHI special, they have to cross a 20-meter scaffolding (I don’t know the height but it looks tall enough) with the breathtaking view of the Rainbow Bridge and Odaiba serving as background. On any other time, it would have been romantic. Jun quipped “you’re beautiful Odaiba” while Sho screamed, “HELLO TOKYO!!!” as if he was in a concert and not about to put his acrophobia to test. I could only hope that Fuji TV insured them prior to this stunt (I’m sure they did).

It’s not really something new for them. Scaredy cat Sho even scoffed. This is simple, they had to fly across Kokuritsu suspended on cables for their 5×10 concert. Been there, done that.

I expected Jun to win this challenge hands down considering that of the five, he’s the one who relishes being suspended in mid-air and doing stunts in their concerts. And everyone knows Sho has fear of heights though for the sake of the group, and out of fear of walking alone on a huge stage while the others are above him, he swallows that fear (along with some calming pill most probably) and does the crazy things his bandmates do anyway.

This should be a piece of cake for Aiba. He has come face to face with tigers, kicked a ball to a lion’s face, fed crocodiles etc. Crossing a scaffolding should be peanuts.

The brat looks like he’s joining a marathon. This should be easy. Nothing fazes the brat. Not even Clint Eastwood. 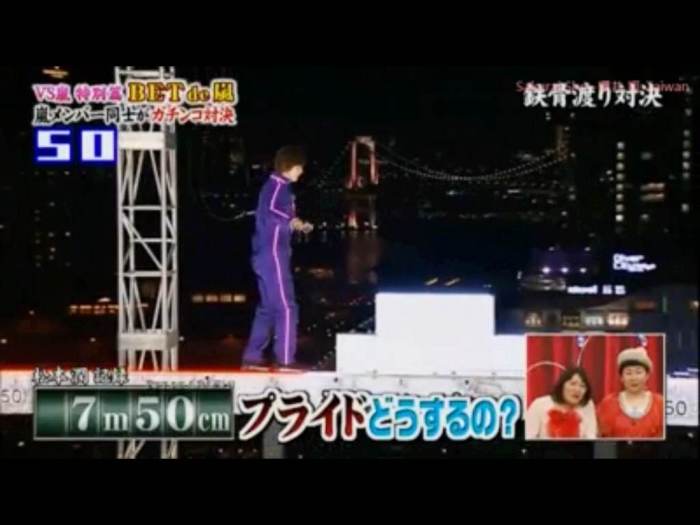 Jun, Arashi’s concert master, relishes planning stunts that torture his bandmates, especially that Sakurai Sho. He has done the MJ walk upside down 30 meters up in the air. This is nothing.

He’s not scared. Really, he isn’t. He’s done even scarier things before. Like interview world leaders. Cross this scaffolding? Pssshhhh. 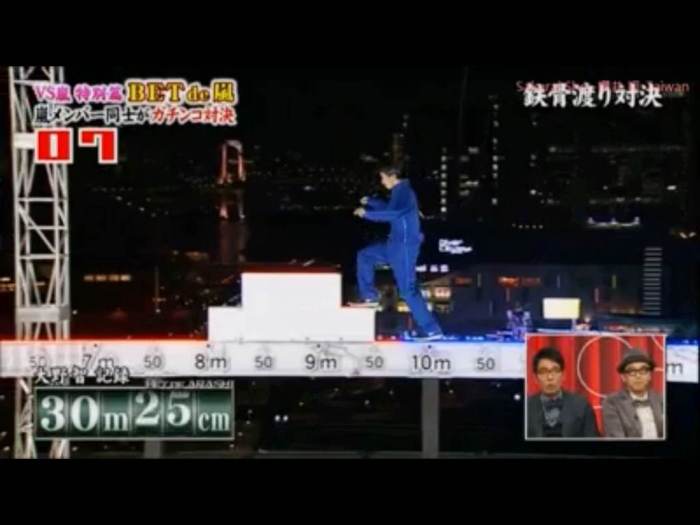 Don’t underestimate the sleepy-looking leader of Arashi. He may seem lazy and clueless but he’s used to standing on swaying boats that crossing a narrow scaffolding means nothing to him.

In the end, it was the fleet-footed Riida who won the challenge. As expected of Arashi’s fearless leader who gracefully navigated the scaffolding like a pro skywalker. Rankings below (the second challenge that involved crossing some blocks ala Mario on the scaffolding is not factored in in the figures):

This stunt reminds me of Arashi Training Camp in 2011 where they also had to do some challenges to “train” for future concerts (I felt it was more for the sake of Sho).

Dangerous stunts aside, Arashi knows how to entertain. They can make a mundane round of Old Maid or Concentration card game (as what was the case in this BET DE ARASHI episode) very interesting and hilarious. Heck, they can even make a simple introduction, in English, to the SPIDERMAN 2 cast, downright funny that they made an impression on Emma Stone (not so much on the Engrish though but on being an “intense” boy band LOL).

I don’t know how they do it. Perhaps it’s years of being in front of the TV cameras and the stupid things they did in CxDxG no ARASHI have paid off.

And while we’re on stunts… news came out on ARASHI BLAST IN HAWAII to celebrate their 15th anniversary. Let’s not argue about the logistics (I am sure this is not the only 5×15 event they have planned) for now.

The news said they are preparing a grand stage and Sho talked about making an entrance either from the ocean or the sky (the ocean is a problem for Nino, the sky for Sho). They have previously shown that they are the masters of concerts so I am looking forward to what they will do this time. And since this will be only for 30,000 fans, I hope they put it in a DVD/BD so that the rest of us ordinary mortals will be able to enjoy the Arashi brand of entertainment.

9 thoughts on “[crack] the things that Arashi does for entertainment”