Pop culture was my favorite topic in social anthropology and perhaps one of those times I didn’t really mind the gazillion of papers I had to write in university. So imagine my glee when I read that Meiji University offers a course on… wait for this… Arashi.

After having gone back to school two years ago to get a second degree (multimedia journalism), I found out one thing: I hate school.

Imagine the conversations you’d have with people. Reposting this very amusing tweet conversation between @heeleyn and @hanyuwave:

Unfortunately, for the rest of us who are not in Japan and not students of Meiji U, there’s no online courses offered. Perhaps they should consider “distance learning” in the future? Way to earn more tuition you know.

In the meantime, let’s take a look at the syllabus:

I don’t even know where to start. Or what will be my favorite session. I guess I’d be especially interested in Nos. 6, 7 and 8. But Nos. 4 and 5 would be fascinating to discuss. While we’re at it, maybe I should list down the “lessons” that I’d like to learn from each “class”.

We all know how they were picked, who wrote the now iconic 嵐 Kanji (none other than my favorite Uncle Johnny) and why they debuted in Hawaii (thank you Higashiyama-senpai! LOL). But I’d like to know more on how the media and the public in general received the newly debuted group then. (Oh no, another JE group…)

On a more personal level, it would be interesting to know how they were chosen for their individual assignments back then, like why was Jun assigned as the comedy leader; was he even that funny? Or how they felt with their first official fan meet on the yacht. How did Riida feel being in the company of four boys on their way to idolhood given his more serious entertainment training? When did Jun decide to have his teeth corrected? Did Sho consider quitting Arashi so he could focus on his studies in Keio? Who made Aiba cry the most (just because I think as the most gentle and cheerful among them, someone must have made his life more difficult). And a bonus question: Was Nino always snarky?

2. The Culture of Johnny’s Entertainment

Will this part touch (pun not intended!) on the, uh, sensitive matter of the sex abuse allegations? Seriously, while we know the senpai-kouhai culture in Japan in general, it would be interesting to take a look at the inter-personal relationships among JE talents. Like in anything, I’m sure there are cliques. Does this affect the dynamics among the different groups?

3. Before Arashi, focusing on SMAP

Ahh, for sure the never-ending comparisons would surface.

I like SMAP, I respect them and their place in Japanese pop culture. I have my opinion on their singing and dancing but hey, who can argue with the more than two decades they have been in the business? And I do understand the POV that no one can take SMAP’s place in J-pop, not even Arashi. The thing is, SMAP’s position in J-pop history is already secured, there’s nothing to be insecure about. Idols come and go. And I hope that when it’s Arashi’s turn to give way to the next idol group, I won’t insist on my own time warp.

4. Changes in Arashi’s PVs – before the big break

5. Changes in Arashi’s PVs – after the big break

Obviously, they have more budget now to do elaborate and glossy PVs. I do wonder if they give inputs on how the PVs would be like, the theme, storyline etc. I still love those PVs with storylines like My Girl and Aozora Pedaru and I hope they’d do more of those. Or the crack ones like Happiness and Kitto Daijoubu.

One thing’s for sure though. Arashi is not afraid to go back to their baka/dorky/crack days just to fit the image of being the top idol group. GUTS is a testimony to that.

6. A comparison of the members of Arashi

Ahhh… one of my favorite Arashi topics.

As a sociologist, it fascinates me to observe a very diverse group that functions as a solid unit. In the real world, we have seen how personality differences ruined many marriages and broke up teams and groups, not necessarily idol groups.

And yet here we have five people who are so different from one another and yet haven’t fought since the day they were formed. Either they are all peace-loving dudes or just plain tolerant of one another. I won’t say they are not confrontational, what with someone like Jun, Sho and Nino in the group. And we have seen in more than one occasion how Jun has lost his temper (in those good old VS ARASHI days) and how the other four handled him. It’s not that they never clash, they just behave like adults more than most of us I guess.

7. Arashi members as they appear on variety shows

I can see the onslaught of fond melancholia  for CxDxG no Arashi and Shukudai-kun on this topic with a younger Arashi who willingly did many stupid/baka things. We can say, yes, all for the sake of fame, but hey, they even mused at one point if there were even people watching them do all the foolish experiments in those late night slots. (KimuTaku was one of those who watched by the way.)

Variety shows have honed them into the kind of hosts that get contracted for the likes of NHK’S KOHAKU and 24HRTV. Their fourth time hosting KOHAKU last year with Haruka Ayase is a good example at how they have grown as hosts, the way they were relaxed and yet professional, helping Ayase (oh and I ship Ayashi) who, as a first-time host of the annual year-end music show, was jittery and committed many fumbles (and still ended up adorable). Let’s not forget that Sho, Aiba and Nino now host their own shows. I would love to see Jun hosting a cooking show and Riida… a fishing show, maybe?

So yes, variety shows are part and parcel of Arashi’s career as idols. It brought them to public consciousness, though it did take an awfully long time and a lot of foolish TV stunts in the process, and it made them thick-skinned to do anything that typical idols won’t even dare of doing. Nipple shirts and stocking heads anyone?

In the Secret Talk for Wish, they did a Hana Yori Dango skit. If I remember correctly, it was Riida who played Makino and Sho as Domyouji, or was it the other way around. To make the long story short, they bungled it, to much protests from Jun and laughter from Aiba and Nino.

Riida: “This is the reason why they never ask us to be in dramas.”

Well, lo and behold, nine years later, a drama season in Japan ain’t complete without an Arashi member in it. This season alone, we have Nino and Riida in two separate dramas.

It’s very interesting how, in the dramas that they do, they have their own niche. Riida does non-human and atypical characters. Sho does unorthodox ones that veer away from his Keio boy, newscaster image. Aiba goes for heartwarming types that’s closer to his real life personality. Nino is inclined towards melodrama, the better to showcase those acting chops that made Clint Eastwood turn him into a “Hollywood Star”. Jun is the romantic lead type.

Even their drama roles are as different as their personalities and that somehow keep the balance in the group. They don’t have to compete for the same roles (though god knows if two or more of them have been considered for a single role). And while we’re on dramas, can we celebrate 5×15 with a drama? Or a film? Or a documentary, maybe?

Oh my… where to begin? Can I just quote a previous post on Arashi and their concerts?

I would like to think that Arashi has secured their own place in J-pop but I’m biased and it’s not for me to say. Well, okay, they have sold 7 million DVD copies (collective figure) as of last year without doing senbatsus, handshaking events and releasing gazillion of versions, and continue to top Oricon with every release they make from singles to albums and DVDs. Their songs have become modern classics with Kansha Kangeki Ame Arashi cited as one of the songs that inspired people during the Great East Japan Earthquake.

But don’t let it come from me. Ask any Katy Perry fan, they probably don’t know who Arashi is but they got butthurt just the same for having been defeated at the world charts by an unknown Japanese group whose songs no one understands. And that alone is a star for J-pop on the global stage.

Aha. We’d be stepping into some landmines here.

On this, let me just quote Sho:“…You can’t compare us with K-pop, because preconditions in South Korean and Japanese markets are different.”

More on the Nikkei interview here.

I wonder if there were changes effected in the agency when the Arashi model succeeded. Did the power struggle between Iijima and Julie Kitagawa even become fiercer now that another group other than SMAP has emerged? Obviously, their priority in JE has changed. It has to, they can’t be #8 forever.

But what kind of new policies, if any, would there be all thanks to Arashi? Singing the theme of a member’s drama as a sure way of releasing singles and boosting a group’s popularity? Letting them do crazier stuff on TV? Make the aspiring idols more un-idol-like? Emphasize members’ personality differences? How much has Arashi’s success influenced the career decisions that the management does for the other talents, I wonder?

And will Johnny let Sho take over one day? LOL

13. Overview on the Era of Arashi

This is when we write a paper or thesis, right?

I can write a masteral and doctoral thesis on Arashi, as any other Arashi fan can. There’s just so much material for topics. But if I were to do a thesis on them, it would look beyond what the group is to how the group has influenced its fandom. I’ve read a lot of accounts on how Arashi has helped them through life through their work and just like any thesis, it would be interesting to have case studies.

I also believe that there’s an inherent character that prevails and is common between fans and their idols. Tell me who your idol is and I’ll tell you what kind of fan you are. At the risk of generalizing, the Arashi fandom is a happy one. There are dramas every now and then but the atmosphere always tends toward the positive, happy side of things. Much like Arashi themselves.

What kind of test would there be, I wonder?

Will it be something like Name that Arashi Tune? Or fill in the lyrics to a B-side Arashi song? Name the drama character? Identify the year of Sho’s or Jun’s hairstyles? Name the animal that Aiba interacted with? Or the Engrish he had spoken in a particular episode? Or maybe the number of words that Riida spoke on a particular episode of  their TV shows? Or the girls linked to Nino?

Someone make The Ultimate Arashi Fangirl Test, quick, if it hasn’t been done yet.

There are some topics that should be covered when doing an Arashi course though like the commercials that they do or their music. PVs or concerts do not capture the breadth of their discography and the messages of their songs.

So anyway, see you in class? I wonder if we’d have a Sawada Shin for a classmate or a Yoshimoto-sensei or Aoshi-sensei for a teacher? 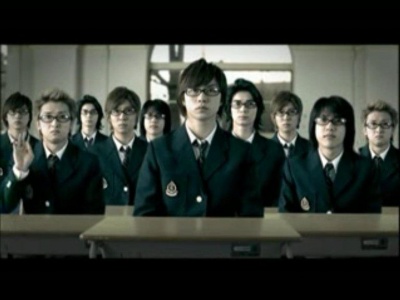