(This is part of the series on behind-the-scenes while covering celebrities.)

This may as well be an apology letter to Mike He. And @marylngoh would know why I would need to make that apology to Xiao Mei. 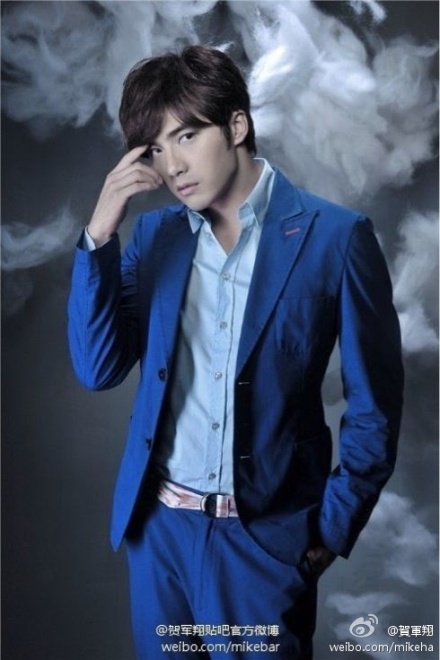 Whenever I have a trip to Taipei, I always ask my friends who I should interview. Of course, being my boy OTP, Mike’s name would naturally be on top of the list.

So when I went to Taipei again in April 2009 (that feels like centuries ago in another lifetime), I asked my “agent” if he could arrange an interview with him, aside from the other celebrity interviews on my list. But getting this guy was not easy, though not of his own doing, but that of his then-manager’s, and it really tested the patience of my agent.

It was this experience with Mike that taught me to be blase when it comes to getting interviews with celebrities. I’ve learned not to pin my hopes to avoid disappointments. If it’s meant to be, then it will happen.

It took several channels in order to get the manager to get back to my agent, and judging from the feedback I was getting, the manager sounded quite difficult to deal with. Honestly, managers can be fussy more than their talents but well, that’s their job. C’est la vie. 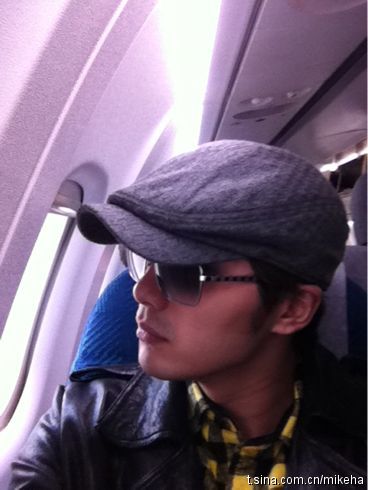 We only got confirmation for the interview the day before it was to happen. And when my agent told me, I didn’t even feel happy. It was more like–are you sure they said yes? Relief, maybe. Or the immediate panic of having less than 24 hours to do research and prepare my questions. Not that I haven’t done my research. At that point, I could ask Mike relevant questions that won’t just skim the surface of his career or life. I could ask him specific ones.

It was just a relief that the manager, unlike others, did not ask for advanced questions. At the rate on how she gave us the run-around, my agent would have been about ready to skin her alive if she did.

I have to admit that I was nervous and excited over the interview I couldn’t properly focus on the two others that preceded it, including Big Shot of Cross-Strait Affairs, equivalent to being UN secretary-general when it comes to relations between Taiwan and China. Mike He was the big shot for me, hao ya. 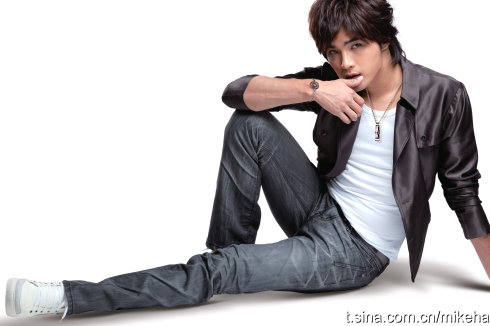 So our car arrived at the designated address. I followed my agent who looked confused as he checked the building before us. It was a temple. Immediately, my mind went–sh*t, did the manager just trick us? Agent made calls as we walked up and down the street, me following him like an equally confused puppy.

Finally, he pointed to a run-down building right next to the temple. I looked at it doubtfully. HERE? Oh, perhaps he is filming here, I assured myself as we went up the narrow wooden staircase. It was an old residential/commercial building that seemed to have been forgotten by time. We passed by an apartment on the second floor with shoes and slippers piled on top of one another in front of a door. We continued up to the third floor where a door opened just as we arrived.

There were shoes at the entrance too and I looked at it frowning. I mean, I’m Asian. I know we have to take off our shoes but it was cold and I was in no mood to remove my shoes. While I was contemplating this situation, I happened to look up and saw someone across the room sitting on a bench and putting on socks. He was frowning too. At me. It was Mike He. 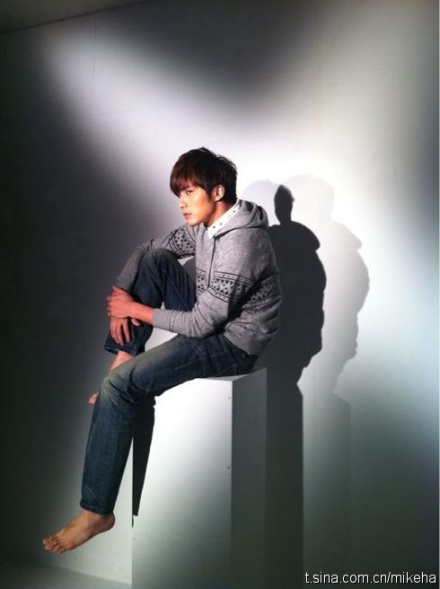 Celebrities I’ve met are either wary or friendly the first time they face a journalist. Mike looked snooty. And the effect was instantaneous. I hurriedly removed my shoes and put on the slippers–similar to the ones that Mike was wearing–that a lady handed to me. His manager.

She introduced herself to us as Mike stood beside her silently listening to my chit-chat with the manager (about her Japanese-sounding name). He was in jeans and a checked hooded jacket that looked old. When I turned to him, he readily extended his hand, looked at me steadily and shook my hand. “Hello, I’m Mike.” Firm handshake. Steady gaze. Confident English. I was impressed. 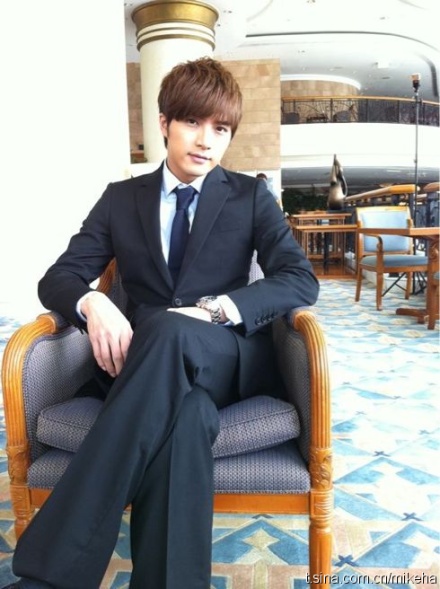 The place turned out to be a photo studio. He just finished a photoshoot and I can see one of the guys working on a Mac brushing up some of the photos already. We sat down on the only couch in the room with my agent, also translator, on a chair to Mike’s left, and his manager also on a chair, to my right.

The first question I asked as soon as we sat down was to the manager. How much time do I have? She said no time limit. Mike was already free. And I thought, after all that run-around, she can be considerate after all.

When interviewing celebrities, I start with small chit-chat. How are you? It’s been cold lately. Basically watercooler talk, until they start to relax. I would have expected Mike to be difficult to thaw judging from the frown he gave me when we arrived. But he quickly relaxed and even made a huge effort to speak English. Of course he’s not Wu Chun or Van Ness Wu or Ken Zhu who are all very fluent in the language, but Mike was conversational, and most of the time, did not need translation. He laughed, cracked jokes, turned serious when necessary, would pause a long time when thinking of how to phrase his answers in English… all the time speaking in that signature deep bedroom voice that only he possesses in the Taiwan e-biz. 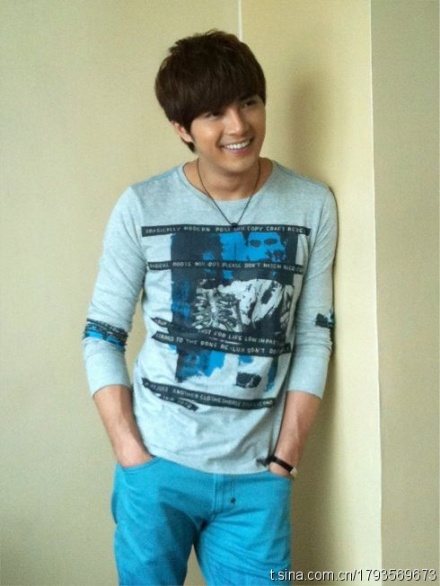 There were still telltale signs of the make-up he wore for the photoshoot but he was raw as could be in front of me that it was easy to pinpoint his asset: his eyes. He has a lovely set of deep-set eyes that is capable of melting anyone into a former human goo if he gazes at you. Luckily, I did not melt because I was more focused on mentally prepping up my questions about girl OTP.

I won’t write about the OTP parts here because this is about Xiao Mei. Though I do have to mention the “liar joke” because it had something to do with seeing him again the following night at the concert of girl OTP. He had to travel from the south of Taiwan to the north just to watch her–thank goodness for high speed rails. And when he saw me, he waved as if to say… see, I kept my word. I wanted to go up to him and chat, if only to thank him, but I did not want to be inappropriate and act so familiar. 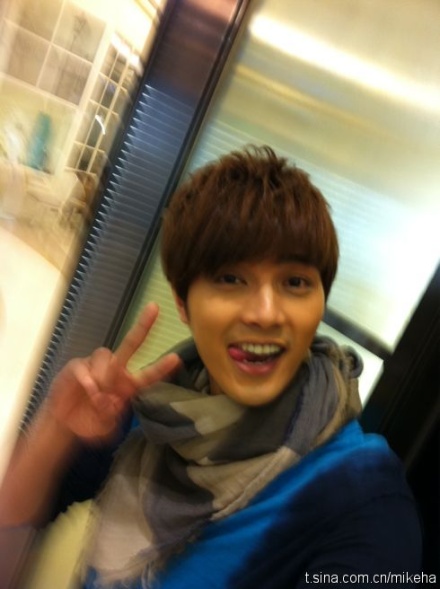 Some things have happened since then. I have said so many things that regrettably did not honor the kind of person he was when we met. I doubt if he’d even remember me. But I do remember the fun interview we had, the effort he made to converse in a language I was more comfortable in, his sincerity and that firm handshake he extended when we first met and then said goodbye. To me, a handshake says a lot about a person. I’ve shaken many people’s hands: friends, acquaintances, bosses, politicians, other VIPs. And I’d remember Xiao Mei’s to be one of the firmest and warmest. 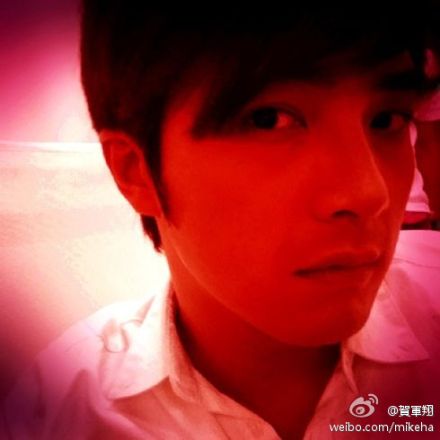 The write-up based on that interview here (a different version appeared on The China Post). Photos from his Weibo.

6 thoughts on “behind the story: Mike He”