SMART (Support Mike And Rainie Together) has been through many rough patches especially this year. Some have left, and those who have stayed don’t know if the ship is still floating or it’s just our fighting spirit that keeps us afloat.

I do know that what has kept me holding on this long is April 24, 2010 and the little behind-the-scene things I know that do not make it to the tabloids. Strange, isn’t it? Strange especially when you consider that Rainie’s outings with her male friends are splashed on Apple Daily and just today, Next magazine reported that she and her leading man in Love You are “dating”, and that she asked for a three-month leave–unheard of from the workaholic Rainie.

But what’s even more strange, Mike and Rainie chose this day that news came out to come out together in public, in their first public appearance together after 1,369 days.

This was their last public appearance together, when she surprised him at his birthday party in 2007. (He thought she was not coming as they have just returned from their Why Why Love promotions in Kuala Lumpur and she told him she would be going to Hong Kong.)

SMARTies have been counting, I have lost count. It just feels an eternity already rooting for these two people and as I was telling mehmeh (@marylngoh) this morning while we pondered on the Next article: “Sometimes I do not know how I have held on this far.”

Sometimes too, it is easier to give up and follow those who have jumped ship a long time ago. I understand their reasons and as time passes by, life happens–your real life. And yet, I am still here. And so are a few.

When mehmeh told me that they have been invited to Apple Daily’s Star Party, I was happy and hopeful. But we have been burned several times I did not dare to hope for no more than a little interaction between them at the closed-door party.

And even an official release about the event with their names beside each other was enough to make us happy.

That is how low our expectations have become after the Pig, Cocky, Old King and Baldy Incidents in our OTP (one true pair)’s story. But those incidents have also taught us many lessons from humility to open-mindedness to indifference and most of all, faith.

So considering that we started today with the Next magazine drivel, I was stumped again. But life has to go on although at the back of my mind, I was wondering what was going on in Taipei.

These photos of their arrival at the event were posted by different fans, and strangely, the time of posting was the same (though Mike reportedly arrived first with his assistants and Rainie arrived with her manager, Dadage).

They both look so well-rested and happy. 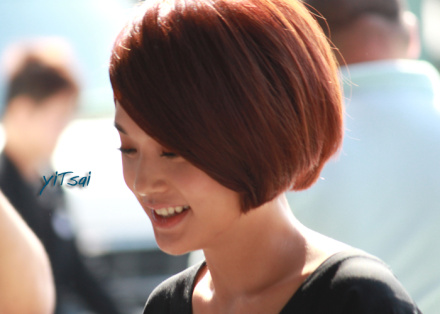 I was waiting for the press conference of the World Film Festival Bangkok to begin when mehmeh called all the way from Singapore. My heart skipped and the first thing I asked was: good or bad news?

This was the news:

This was how it looked inside the party: 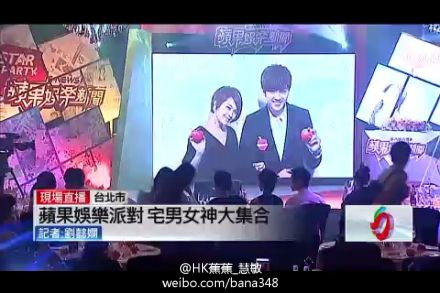 I want to bite that apple:

In all their time together as a drama pair, never for once did Mike and Rainie walk the red carpet together. They did present an award at the Golden Bell 2004. But they never made any public appearance together except when it is drama-related or due to endorsements together. They are not like Ariel Lin and Joe Cheng for example, who would play to the peanut gallery. Mike and Rainie don’t “play” with each other (at least not publicly) though again, strangely, they play to the peanut gallery of their other pairings. So just imagine the frustration that SMARTies have felt all this time. And did I mention that they are two of the most secretive people in the Taiwan e-biz? In other words, what you see on their Weibo or Tencent accounts are the only information that they are willing to give about themselves.

So now, this day begs to ask the following questions:

>> why make an appearance together when they are not doing anything–no drama collaboration in sight, nothing to promote together?

>> why didn’t he walk with his colleagues from HIM in the same way that Joe Cheng and Sonia Sui–Catwalk colleagues–did? Why?

>> they are from different management companies: he is from HIM and she is from Super Mars. So… why?

>> why did they have to make nice with the notorious Apple Daily… together? Weishenme?

OK, I may be overthinking too much but when you have waited 1,369 days for them to appear together, it’s a bit overwhelming. I was just hoping for some interaction at the party. mehmeh and I joked about wishing they’d walk the red carpet but quickly took that back not wanting to hope and be disappointed… again. So walking hand-in-arm was beyond our wildest wishes today.

God knows how many times I have watched this video already.

They both looked nervous and wouldn’t even look at each other except for some fleeting glimpses while they were walking the red carpet and onstage. Just how nervous? She’s so stiff and they were talking through their smiles while walking, and he forgot to smile while they were posing onstage. Compare that to the laidback walk of the rest of the stars… I mean, these people are used to walking the red carpet.

But those few public moments were enough to reduce me to both tears and laughter while talking to mehmeh. (They didn’t sit together at the party, she sat with Super Mars colleague Elva Hsiao and he sat with his male Biore co-endorser.)

To some, this may just be mere shipping but fellow shippers would understand where I am coming from.

I haven’t shipped anyone offscreen. I’ve liked many onscreen couples but I never bothered with them offscreen. Only with Mike & Rainie that I had to see for myself how they are together. I did on April 24, 2010 although SMARTies do not count that as an official public appearance because they didn’t appear onstage together. He was in the audience watching her–taking the speed train from Kaohsiung to Taipei just to make it to her concert, taking along his younger brother (and his mother was supposedly somewhere in the crowd, He Mama herself said). What about the set visits that were supposed to be secret but accidentally revealed by insiders on Weibo and Mike himself. Nope, those don’t count as well.

We may be a demanding lot but what makes the Mike & Rainie story interesting is what’s behind-the-scenes that never make it to Apple Daily or Next magazine. Strange. But that’s just how it is.

There are still a lot of things I want to say right now like on her leave and his public complaint about time… but I just want to savor the moment. (And thank You for another answered prayer.)

BREAKING NEWS Courtesy of mehmeh based on tonight’s 100% Entertainment TV show: Rainie has cleared up the drivel about her and Love You co-star and that he is nothing… all this while standing next to Mike.

This is the video of that interview.

This is the English-subbed version.

BREAKING TWEET from Rainie herself clarifying on the Love You leading man as just a “normal friend”: 對於這期的壹週刊，我一定要嚴正回應！我沒有生氣！因為大家只是入戲太深了~但我和孝全就是普通朋友，如此而已！請不要把哥兒們送作堆！謝謝

(Photos will be updated once they are out.) 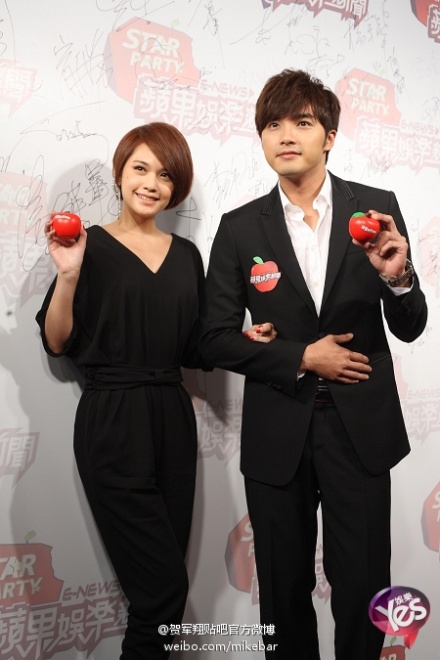