(I planned to write a 20th anniversary post after their YouTube Live to see what they’re going to say and base the content off that, but as we all know, ARASHI came out on SNS like it was nobody’s business and my plan flew out of the window I can only write down my coherent thoughts now.)

I will never ask ARASHI “what’s next” again. It’s been three weeks since their Nov. 3 YouTube Live press conference and so many things have happened and continue to happen that I haven’t fully caught up with the reality that the things we did not even dare dream of are actually unfolding before our very own social media eyes. 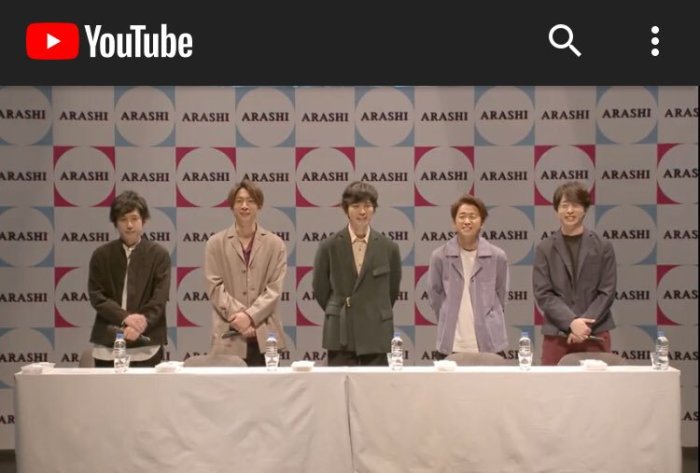 But first a recap: on Nov. 3, the 20th anniversary of their CD debut no less,they held a press conference in Tokyo that was streamed live on their YouTube channel. There they simultaneously launched their official social media platforms on Twitter, Instagram, Facebook, Weibo and TikTok because they want to get “closer” to their fans. At the same time, they announced that they will be visiting four cities in Southeast Asia similar to JETSTORM 2006–and the following week already! That same day, they went on Instagram Live and even had a mini party to celebrate their 20th birthday, about half an hour before the YouTube premiere of Turning Up, their first digital release with views reaching 10 million in 2 weeks.

Just minutes before the premiere, they were in the chat on their YouTube channel with Oh-chan complaining that the messages were breezing by so fast (same, Riida, same). Talk about information overload.

What followed was a busy week not only for ARASHI (since this is how they spell it on their accounts, then I suppose this is the official way to do it) but for the fans as well. Those like me who thought that, fine, they’ve finally landed on SNS but life would still carry on normally, couldn’t have been farther from the truth. Updates on Twitter and Instagram, where they reached 2.1 million and 3 million followers, respectively, in just two weeks since the launch, soon followed.

The end of that week, they confirmed their status as Japan’s national idol group by sharing the stage with no less than Prime Minister Shinzo Abe at the celebration of Emperor Naruhito’s enthronement. Their performance of “Journey to Harmony” (music by renowned composer Yoko Kanno and words by screenwriter Yoshikazu Okada) earned praises from regular viewers and even sent Empress Masako to tears.

A mere few hours later, they boarded a private jet to start their JETSTORM press tour, heading for Jakarta, the first stop. When before fans would only get to see photos in the news and videos once they release their DVD (like in JETSTORM 2006 that was part of Arashi Around Asia), this time they got updates in real time as ARASHI boarded the PJ (thanks Nino for this enduring term) and every time they would land in their destinations. 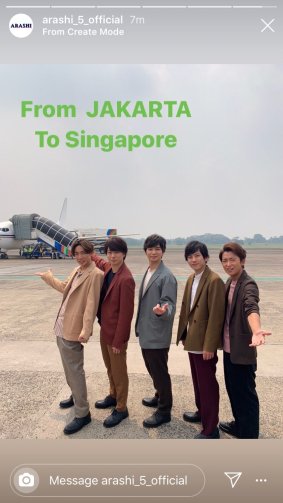 As I watched everything unfold, I couldn’t help asking— is this all a dream? But I also couldn’t help feeling proud that I’m an Arashian, thinking ARASHI really have a different way of doing things (in my previous post, I wrote “Whatever they do next, for sure they’ll do it on their own terms as what they have always done” and ain’t that truer more than ever today). I don’t mean the grand part with the PJ and a team of 20 staff to accompany them on the 4-city 2-day tour.  But behind the grand bonanza, ARASHI were still very on-brand. They charmed the press (though at one point told them to back off so the fans at the back could see them) and interacted with fans even under limited circumstances, particularly in Jakarta, where unlike in Bangkok and Taipei, they had no proper venue to greet the fans. (Fans in Bangkok waited for as long as 12 hours and only saw them for about six minutes late that night, but the promoter expertly managed the crowd that had swelled to about 3,000-plus by the time ARASHI arrived.) 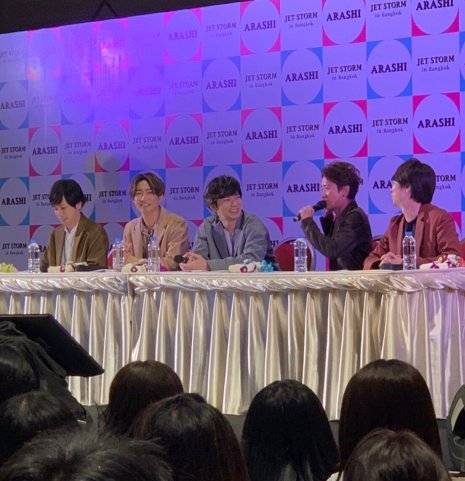 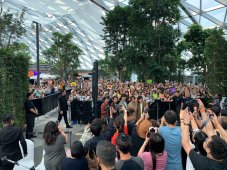 And all through-out, ARASHI looked like they were enjoying themselves, putting on their smiles and charms as usual as if they didn’t lack sleep and weren’t spending most of their time in the air and on the road. And most importantly, how could they look so fresh and idol-like even if they were wearing the same clothes? They only changed their press conference clothes for Day 1 in Jakarta, Singapore and Bangkok; and Day 2 in Taipei, but they wore the same clothes they left Tokyo in on their return two days later, except for Aiba I think who changed his shirt. I mean, these are Japanese superstars who collect expensive watches and don’t blink an eye at paying for a vacation villa in cash or buying expensive clothes (their flight wear, their personal clothes that is, were designer brands with Jun’s Moncler hoodie alone probably costing my entire minimalist wardrobe) but they don’t care if they wear the same clothes again and I raise this because it’s one of the values I admire about them–remaining accessible and relateable despite their fame and success.

Commoners like us would be more conscious but I guess when you wear a $1k hoodie (maybe it self launders while you wear it, who knows) and fly in a PJ, it doesn’t really matter. They also just ignored the entire concept of airport fashion among idols (maybe they don’t know or obviously don’t care). But that is why I admire them because never mind the glamor and the fuss that surround them, they’re still simple and down-to-earth to the core. And it’s so on-brand to see that unfold naturally in their social media updates.

And while many have time and again pointed out how ARASHI are so late to the SNS game, they and their team did come to it fully equipped and obviously having taken notes of what works and what doesn’t on social media. Posts and captions written in both Japanese and English, anyone? With their JETSTORM posts to announce each city stop written in the majority language in that country? Plus English subtitles that not even their DVD/BD releases carried? IG Story updates in real time from their green room during Shiyagare filming including Sho showing off his muscles? This is no longer ARASHI ARASHI for dream, this is reality.

Yet it wasn’t entirely surprising to learn that they’ve prepared for their social media debut for over a year. This is par for the course for ARASHI. It took about five years to plan their 15th anniversary concert in Hawaii in 2014 and even their impending hiatus took two years to discuss and finalize. I can just imagine the amount of paperwork and contracts that needed to be ready for their foray into SNS, coming from an agency that previously banned engagement on the platform. There would be image rights and music copyright to consider, especially since they’d be putting their 65 singles on streaming platforms. It’s a business model that they are trying for the first time and while obviously ARASHI do not need the pittance of royalties from streaming sites, it’s something that the jimusho must be considering for their next generation talents if they want to be in step with technological developments that affect how entertainment , including music, is consumed. And who would be in the best position to experiment with it without losing their bottomline but a group that has 20 years worth of work to share on these platforms? Let’s face it, everything that they have shared so far (65 singles and their pvs), except Turning Up, has already earned a pretty penny for the jimusho and the ROI, if we’re looking at Oricon numbers, has been huge. This is why Turning Up, more than serving as their digital debut, is a precious gift.

On a personal level, I have been used to supporting ARASHI by buying their physical albums and DVD/BD releases that it actually felt like a seismic shift to digital. I once said I will only download Spotify if they come to the digital platform and I’d have to be honest that when I said that then, I didn’t think it would happen, ever. And I certainly never saw myself downloading TikTok but there I was agonizing on what username to use. Now I get confused on where to stream their music: shall it be Spotify or Apple Music? I have to remind myself periodically to watch Turning Up on YouTube too.

[Listen to ARASHI on Spotify]

Not that the numbers will matter to them but since they have decided to embark on this digital journey, as a fan, I’d be there to support their endeavor. I’m pretty sure that ARASHI are also adjusting to these changes as much as the fans are, and it’s both hilarious and endearing to see them fumble every now and then on SNS. We all learn along the way and what’s important is that we enjoy ourselves the same way as them.

When they announced their impending hiatus last Jan. 27, so many people have already written them off. But just when many expected them to slowly fade into the horizon as the end of 2020 looms, they revved up their journey instead. There appears to still be a lot in store ahead. Jun has mentioned that they have yet to announce many things and hopefully, this would mean more chances for fans outside of Japan to see them. The response to their social media presence indicates that their fans, especially those outside Japan and who used to face a lot of obstacles to support them, must have just been waiting for them despite earlier reservations and concerns. So far, ARASHI’s use of SNS has given quality content worth all the wait and the engagement they have generated is so enviable and would make for an interesting case study for late adopters.

But it’s not all just about being viral or becoming social media stars (far from that in fact for a group whose leader is a self-confessed noob on SNS and is tech-challenged he can’t even properly type on a keyboard). ARASHI continues on their journey as Japan’s beloved superstar man band and will be the first artist to perform at the New National Stadium (Kokuritsu) for two nights in May next year, a fitting return to what has been their home stage for six years (the only artist to do so) before the stadium was closed for renovations. For them to be the first to use the stadium (that will have a maximum capacity of 80,000) before the Tokyo Olympics is truly an honor.

I’m pretty sure that when they debuted aboard a cruiser in Hawaii in 1999, they never dreamed of the things that they have since achieved. At this point, they no longer have anything to prove. They’re already 20 years old and in Japan, that is the precious coming of age. There’s much ado about turning 20 that the Japanese even dedicate a day to celebrate it (Seijin no Hi) every second Monday of January and for ARASHI, the celebration continues as they conquer, as their song Believe goes, a brand new world.

They have come of age, indeed.