Warning: This is very Arashi-centric. 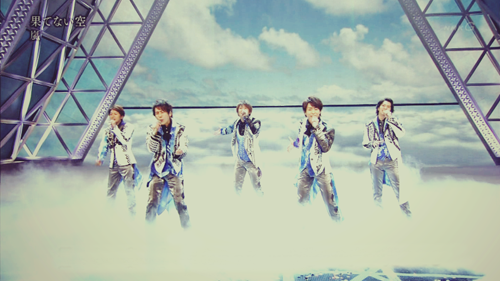 I spent the countdown to 2012 watching NHK’s annual Kouhaku Uta Gassen. Well basically just waiting for Arashi, hosts for the second time, to appear onscreen. When they were offscreen, I did other stuff but the show was fast-paced it was tricky. I did end up missing their much awaited performance of Furusato (Hometown), which they performed for the first time in last year’s Kouhaku.

The reason why it was highly anticipated was because Sho-kun was going to play the piano while the other members sing. I love this song and it took on a deeper, more meaningful meaning after the March 11 Great Japan Earthquake.

The most touching part of the number was when Fukushima residents and volunteers alike sang with them onscreen. Some of the performers also came to join them, including TOKIO. I love TOKIO x Arashi, they’re just so funny together and it’s obvious that there is much love, warmth, affection and respect between the two groups.

But of course, I also love the Nakai-san x Arashi moment during SMAP’s Original Smile number. 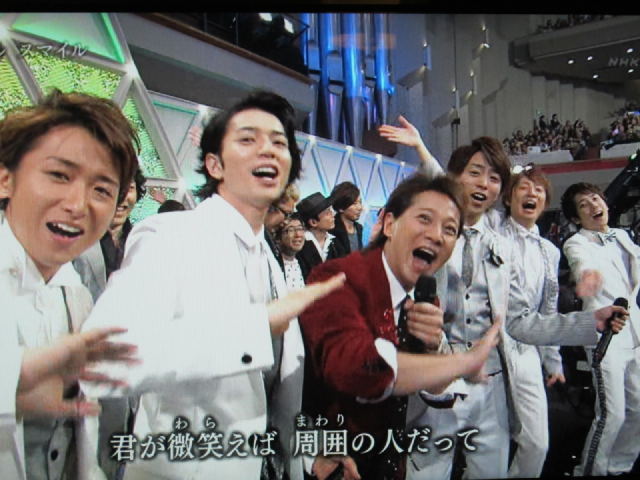 It made me miss Utaban and the Ohno vs Nakai-san mock fights. Those were fun days.

There were 50 numbers in all, excluding the special numbers like Furusato and Arashi x Disney collaboration.

The other performers included SMAP, TOKIO, Ashida Mana, Koda Kumi, Hamasaki Ayumi (who opened the show), Funky Monkey Babys (I ♥ this group too), EXILE (♥ them too), Fukuyama Masaharu (now I understand why many women go gaga over him) and speaking of gaga, Lady Gaga also had a special pre-recorded number. There were Kpop groups too: Tohoshinki, Girls’ Generation and KARA. Complete list of performers here.

What is notable about Kouhaku is, it’s not just about pop music. It beautifully blends pop and enka, giving the viewer a Japanese cultural experience. To see popstars alongside traditional artistes was a treat.

Arashi’s number as part of the white team was a special medley composed of Meikyuu Love Song and Hatenai Sora. The effects were just so awesome and very Arashi.

I love this particular angle during the Hatenai Sora performance: Thankfully there was no mishap similar to FNS. The boys delivered and were more relaxed compared to last year when understandably they had first-time jitters as hosts. They also changed into several costumes but I like them best in the traditional wafuku. 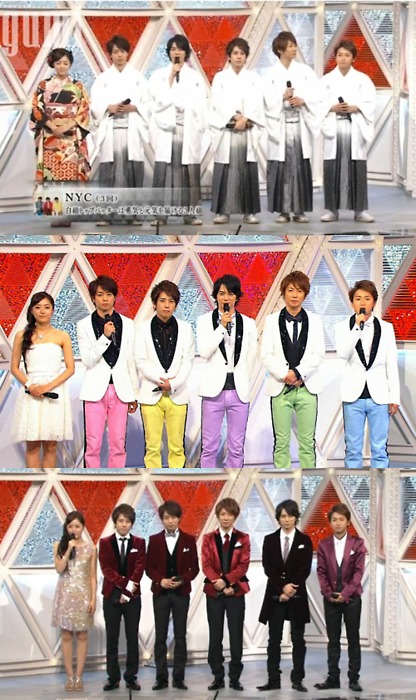 Another reason that made my Kouhaku watching complete was Arashi x Hasebe Makoto, the captain of Japan’s football team.

And today, the ratings were out and Kouhaku tops the 2011 TV numbers! Article here:

The program was divided into two parts with the red and white teams alternating with their performance. According to tokyograph, the first half of the program averaged 35.2% while the second half averaged 41.6%.

Here’s a comparison with the last two years:

I really hope that Arashi will be back to host the 63rd Kouhaku. In the meantime, they’ve been announced as this year’s hosts of NTV’s 24時間テレビ. Until next time! あけましておめでとうございます!