As a fan, we look to our idols as a reflection of our best selves and a projection of our brightest dreams. But it’s a risk we take, along with our money and our time, and most often just armed with sheer guts and a transparent membership card that many do not even have.

I never expected to last 14 years as an Arashian. Given the difficulties of being an international fan, too, I sometimes wonder why I am still here. It took me all of 13 years to finally have the guts to ask a Japanese friend to borrow her address so I could apply for the fan club. It still takes a lot of guts every time I have to do anything that is fan-club-related, given my non-existent Nihongo (all that I learned has disappeared without a trace just like the Dream “A” Live concert DVD). And even more courage to show up at the gate of say, Tokyo Dome or Kyocera Dome, and show my passport and FC card to J&A’s version of scary immigration officers, not knowing whether I will be waved in or pulled aside to be questioned further–What is your Japanese address? Can you show me your FC profile? Do you have other forms of identification? Or the like. Who your favorite member is, what your favorite album/single is, which concert you have watched live, how long have you been a fan are all immaterial questions at the J&A immigration lane.

But the question–why am I still here, why do I even bother–is merely rhetorical. Because I know why. It’s because of every member of Arashi including their little quirks, in every variety show of theirs I watched and laughed my lungs out forgetting the weight of the world, in every song of theirs that served as a soundtrack to my otherwise-ordinary life, in every kind yet simple gesture they did through their interactions with the general public that inspired me, in all the failures they went through and the victories thereafter that reminded me that this world is just and rewards those who are decent and who work hard.

Fans are indeed brave to cast their dreams, aspirations and happiness on people they barely know. Brave because there is no way of telling whether these people deserve such admiration and devotion. There are times we are proven wrong, when things unravel and we realize the people we admire and put on a pedestal are not who we thought they were. We have seen this happening recently and it is brave for fans to move past the disappointment, but it is certainly not bravery to keep on supporting people who do not deserve it–but that is a different story. Then there are the times that our bravery–and equal amount of naivete–to follow people we don’t know beyond their tightly controlled public image is rewarded when we hear good news or good things about them.

I was outside when I first read the news that Arashi has been chosen by Japan’s Imperial Household to perform at an event in November celebrating Emperor Naruhito’s enthronement, so I could not exactly scream my excitement and joy for them. The 2-million-plus sales of All the Best!! 1999-2019 (achieved in less than three months) or the impressive 340,479 first day sales of Brave (a stand-alone single with no B-side and up against one of the currently formidable Japanese artists) aside, this is significant because it does not have to do with a fandom ready to open their wallets. Performing for an event connected to the imperial family is an affirmation of Arashi’s place in Japan’s pop culture. Sure, they have been called the national idol group but performing for the emperor, the symbol of the state, is both an honor and a privilege. Obviously their popularity had something to do with it but it did not happen because fans spammed the Imperial Household’s website or barraged it with calls–not even in Arashians’ wildest dreams. For sure there were talks and negotiations that the public is not privy to. Nevertheless, it is an organic journey to Japan’s innermost, most insular circles, and for a Johnny’s group at that. In turn, this is no longer within the fandom, but with the general public, and having GP recognizability is perhaps the cherry on top of any celebrity’s career.

But Arashi’s achievements all stem from decisions they collectively make, individual sacrifices which we will never know, the commitment they give and the efforts they put into them. The entertainment industry is not for the weak, the lazy and the entitled. Fame asks for a lot from those who seek it, and won’t hesitate to deny those who are not willing to sacrifice. Talent may take you a few steps up the side of a mountain but it’s hard work that takes you to the summit. We only have to take a look at those stars who have recently fallen from grace, who felt their fame entitled them to satisfy their greed and lust, who abused their public’s trust and let themselves drown in a glass of water thinking they have tasted champagne. And it is doubly hard when you are in a group because you do not only think of yourself, you have to consider your members, too, in your decisions, even in your behavior outside that group.

That’s why, especially in the face of their hiatus, I appreciate Arashi all the more. What they have decided on, suspending their activities as a group to allow Ohno to momentarily step back from the limelight, is something that won’t work for everyone. I do admire those groups who have chosen to continue despite losing a member or two knowing it would be challenging. But so is giving up a group’s aspirations in favor of a member’s wishes, and not knowing when they can return. Sure, they can afford to do it at this time, as Nino said recently in his 5×20 aisatsu in Osaka, because there are many options available to them now. More importantly, especially for Ohno, it was an option to take a break without leaving the agency, known for its iron hand and controlling ways in dealing with talents. The fact that they have options now is something that was unheard of, say, three years ago. But maybe these options are also there because, bias aside, Arashi is the jimusho’s golden goose and continues to lay the golden eggs even as time continues to tick down to 2021; that it is possible to go on a break because the members are successful individually, are superstars in their own right, and it would be foolish for J&A to let them go, and even more foolish to let Arashi disband, and with it, the legacy they have.

Up to the time they stepped on that small stage on Jan. 27 to face the press and the fans who like me had a gazillion of questions and were waiting with baited breath on what they had to say, I don’t think they had an idea on how their hiatus announcement will be received by the public in general. The gamble could have backfired and it remains to be seen how they will see this through the end. But so far, they have taken all the right steps and even increased their popularity and public likability. As a bonus, they showed that in this era where mental health and self-care have received much attention, taking a break in an industry that capitalizes on public exposure (out of sight, out of mind) is possible after all. Yet, that remains a risk, stopping while they’re still ahead and with no assurances that they will still be welcomed if and when they decide to come back. And that is why I think they are brave, because they chose to take that risk, all things considered. 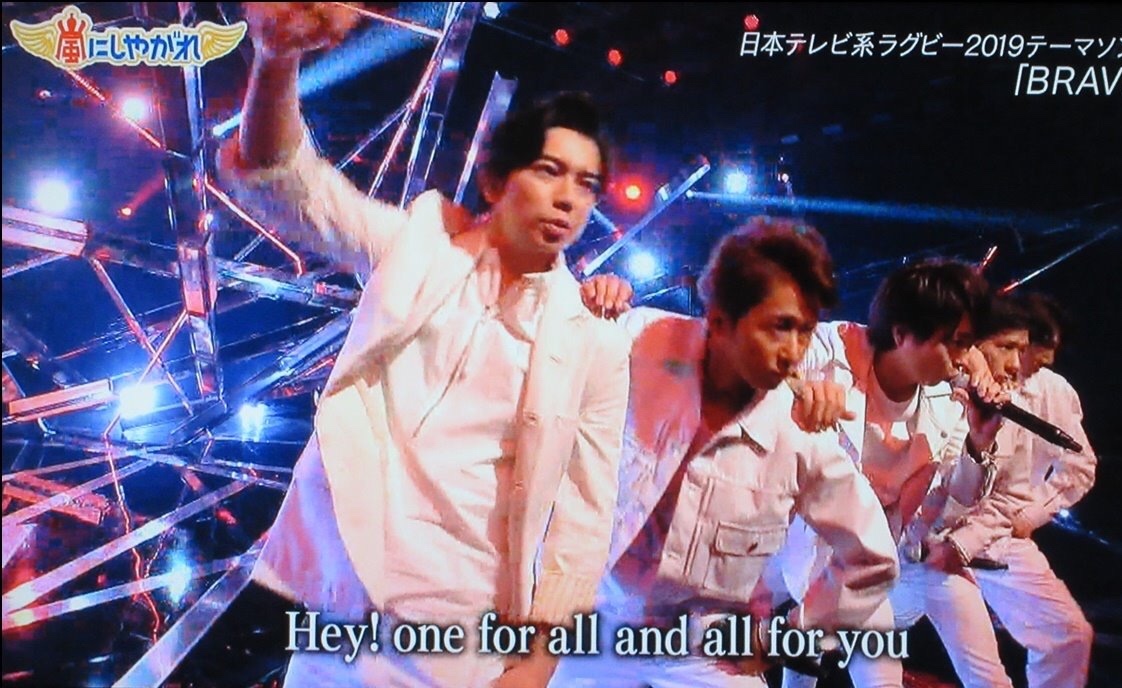 And so today, as Arashi marks the 20th anniversary of their debut on a yacht in Hawaii, I celebrate that bravery.

They were brave to stand together as young, scrawny teenagers,  despite three wanting to quit even before they started, and introduce themselves to the world as Arashi, not knowing what was in store in the future.

They were brave to shoulder on as they faced one frustration after another, using these failures instead as catalyst for their organic cohesion as a group, to start facing the same direction and head towards a common goal.

They were brave to pull one another up in a highly competitive industry where they were rivals as much as they were comrades. No one was left behind in their trajectory, a feat that is so rare within groups where not everyone can take the lead and not everyone can enjoy the same amount of fame. Arashi members are all recognized individually as much as the group.

They were brave to weather all the rumors and scandals especially in their wild, young years that could have shaken the group’s foundations and crumble it to the ground.

They were brave to take responsibility not only of the group but of each other. How many times did they have to bow to bosses, producers, colleagues, fans on behalf of one another? These stories we will never know unless they share them with the public (like that story of Nino bowing before a producer because Aiba was late).

They were brave to sacrifice whatever it would take so that their collective goals would come true. We will never know the nature or extent of these sacrifices but as a fan, I appreciate everything that they have done.

They are brave now as they continue forward, holding their fans’ hands to walk us through the difficult months ahead. Between Arashi and fans, it must be doubly scary for them. After all, this is their lives, their careers at stake. But they shoulder on with the grit that has taken them to where they are now.

They are brave. And the past 20 years is a testament to that. Arashi has indeed come of age.

And perhaps they were brave because they stood side by side, hand in hand, through it all—together.

Now excuse me while I try to be brave and apply for the 12/23 special 5×20 live. After all, fangirling is not for the fainthearted too. And we are all brave fighters.

Let’s meet at the top on the road to our dreams. Hey! One for all and all for you. – BRAVE/Arashi

5 thoughts on “[Arashi] here’s to the brave ones”