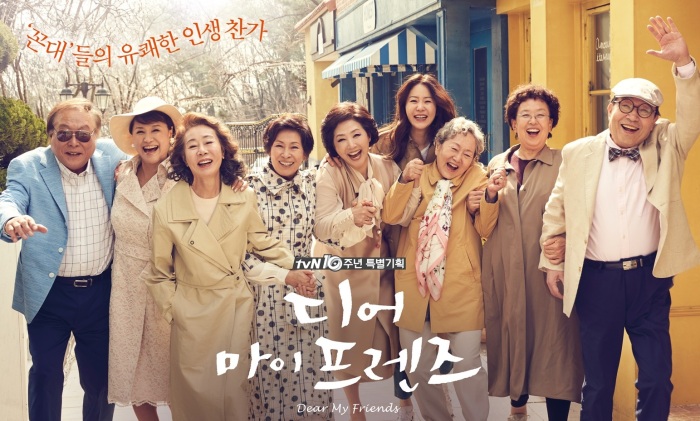 Noh Heekyung has come up with another gem of a drama in Dear My Friends.

When I started watching the drama, I didn’t know she wrote it, but into episode 1, I noticed it had her trademarks: “realistic, cerebral and in-depth portrayals of the lives and relationships of ordinary people”, as Wiki puts it.

The cast is made up of some of South Korea’s best seasoned actors: Kim Hyeja (Goong), Na Moonhe (My Name is Kimsamsoon), Ko Dushim (Marry Him If You Dare), Youn Yuhjung (Worlds Within) and Shin Goo (Heartstrings). Younger actors like Ko Hyunjung, Jo Insung, Daniel Henney and Lee Kwangsoo are among the supporting cast but it’s really the acting sunbaes that rule the show, and how.

Dear My Friends is about the friendship among people who are beyond their golden years and how they cope with disappointments, long-standing resentments and even discrimination against their age. Ko Hyunjung as Park Wan, the daughter of Jang Nanhee (Ko Dushim), represents the point-of-view of the younger generation and how her life intertwines with that of her mother’s friends.

Some scenes are painful and heartbreaking to watch: Jo Heeja (Kim Hyeja) planning to commit suicide (she overheard her children arguing on whether she should have died before their father); Moon Jung-a (Na Moonhe) enduring ill treatment from her husband and children (they PAY her to clean their homes once a week); Jang Nanhee confronting her resentment over a friend’s betrayal from 20 years ago, Oh Choongnam (Youn Yuhjung) covering up her insecurities over her educational attainment by making friends with “intellectuals”…each character has their own burden and story to tell and it makes not only for fascinating watch but an actual guidebook to life.

Someday, we will also reach their age and it serves as an awakening not only for Wan, who is treated like an adopted daughter by her mom’s friends who rely on her more than their own children–something that she considers a burden–but for the rest of us watching the story unfolds. Hopefully, it will teach us to be more sensitive and considerate to older people, and understand that while we are also struggling with our own issues, they have struggled with so much more and still do, and that they still have dreams too.

But it’s not all heavy drama. There are light moments too, and through the eyes of older people, one also sees the beauty of life. And this is exactly what a Noh Heekyung drama is all about.

Perhaps it’s another love letter about life from the eminent writer to drama fans, and it sure is turning out to be one deep, interesting, heartbreaking and heartwarming watch.

Props to TVN for producing a drama like this with no idols in the cast to attract the ratings, and a plot that may not also be attractive to the mainstream audience.