It’s the fifth anniversary of the Great East Japan Earthquake, one of those disasters that makes you remember where you were the day it happened, just like 911 (I was at work and monitoring the news in both instances).

Today, someone shared on Twitter what has been widely talked about but never really confirmed by the people involved: shortly after the disaster, Jun went to a school in Miyagi and left prepaid cards so students could buy books. 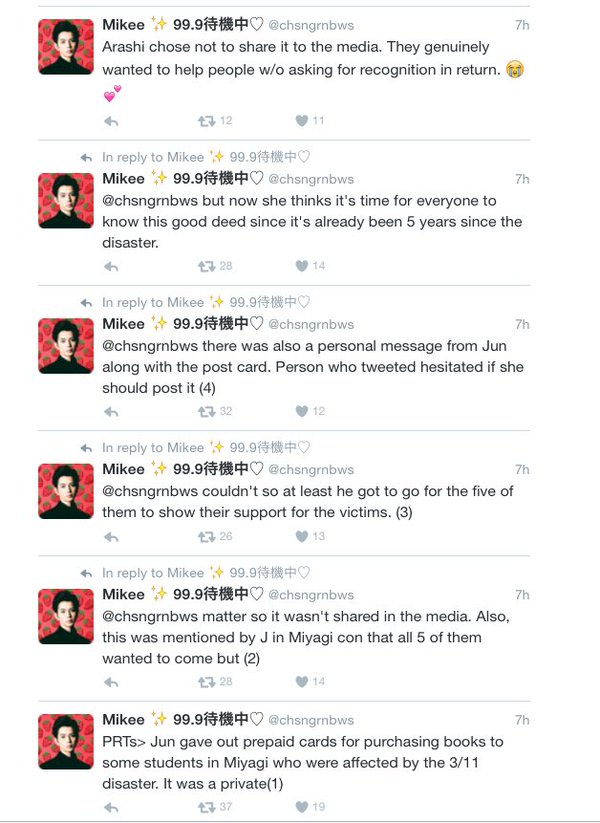 It was a private gesture on top of what Arashi as a group has been doing, raising funds for disaster victims (Marching J, Waku Waku Gakkou, 24HRTV) and appearing as tourism ambassadors at a time that Japan needed the world’s help the most to get back on its feet.

For sure, they were not the only celebrities who donated money and volunteered their time to help out the disaster victims, and we need more role models like them who inspire and not just pander to their audience.

“The most important thing is we should not forget it.” – Sho (2011.07.11, presscon for “Message from Japan” of the Ministry of Foreign Affairs and Japan Tourism Agency)

Last year, Arashi brought their special Blast tour to Miyagi for a four-night concert as part of their continued mission to help in the recovery of disaster areas. It’s not just about remembering, but it’s also continuously extending a helping hand, and it’s not only the big gestures that matter, it’s the small, unreported ones that do (well, Jun’s gesture is no longer just a rumor).

Bur compared to the billions they have raised for disaster victims, such a simple, personal gesture is priceless.

And as much as I’m proud of Arashi’s success, I’m more proud of the people that they are. They may be flawed human beings, but their hearts are in the right place. And that is the most important thing.

Thank you for being inspiring idols, Arashi. I’m supporting the right people.