“Some days we don’t have news so we fabricate news.”

The quote above is from PK, a Bollywood film that stars Aamir Khan, and which I watched during a recent flight (but that would be for a separate post).

The line just amused me so much because it rings very true. There are slow news days when you don’t have a single story but you don’t wanna be told by your editor, “has the world stopped?” Been there and can totally relate.

Recent developments reminded me of this line and of Jay Chou’s song, Si Mian Chu Ge (Besieged from All Sides), which he wrote for the Taiwan media that he calls “gou” (狗/dog). JC has had a love-hate relationship with the gossip press and at one point even challenged them openly. 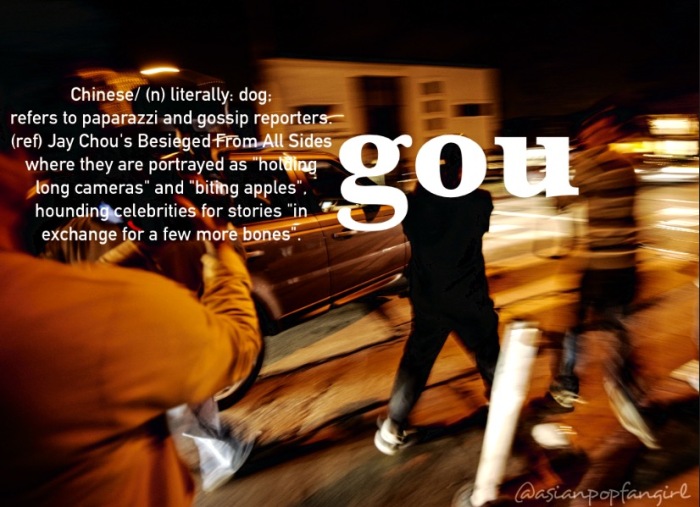 I suppose every celebrity can relate to the lyrics in JC’s song, seemingly living their lives in a fish bowl, their every action dissected and (mis)interpreted.

Indeed it’s amazing how a single quote could make a full story.

I’ve had this fascination with the Taiwan and Hong Kong press before, looking at how the gossip press have mushroomed mostly thanks to Apple Daily and Next Media. So one time during a visit to Taipei, a friend arranged for a visit to Next. Their office was posh and indicates how successful gossip has become. Gossip talks money indeed and I couldn’t help thinking I went to the wrong branch of the industry.

That time, there was a scandal in Taipei about a singer-actress photographed on a flight to New York with an upcoming actor-model. It was a Next magazine exclusive and I saw a copy on the table of the chief’s assistant. The press made it appear that the two were caught on a date to NY, photos of them taken stealthily provided by a fellow passenger in business class (how classy). The “scandal” was denied by both parties, who happened to be under the same agency, saying they just happened to take the same flight, but no one believed them. Naturally, out of curiosity, I asked if the bombastic headline was true. The answer I got was very curious but also very true: “maybe they are really just friends but in the entertainment world, it is very hard for people like them to make friends just like ordinary people without being scandalized.” Of course, over time, it was proven that the “scandal” was not true and it is worth noting that the female artist said in her denial that “time will prove everything” and it really did. But by then, no one really cared about the truth. Nevertheless, the damage has already been done and the female artist suffered a backlash.

Sounds familiar I guess but it is true for every scandal that explodes out there. To outsiders, it’s something to read and break the humdrum of daily life; to the press, it’s another story to fill in the space, attract the hits and turn in a day’s work; to those involved, it may be liberating or a matter of inconvenience, depending on the situation.

Meanwhile, the 狗 will continue barking and prowling for stories in “exchange for their small piece of bone”.

Who let the dogs out?