You’re an Arashi fan if you know what, or rather, who inspired the title for this post. No less than the resident brat of course, Ninomiya Kazunari, one-fifth of Arashi.

Perhaps, Johnny’s saw the potential given the impressive performance of Arashi’s debut album in the charts (it reached platinum status selling more than 300,000 copies then) so the mother company was quick to decide to form an independent label. [Edit: In the comments below, yuui and Rena pointed out that it was because Pony Canyon signed up W-inds, another boy band, so Johnny’s decided to pull out Arashi; a decision that on hindsight, turned out for the best.]

Unfortunately, the sales of Arashi’s albums in the next five years until 2006 were on the decline and sold only 100,000++, never reaching platinum status. These years are otherwise known as the “dark years” of Arashi.

In 2007, things started to look up with Time selling more than 300,000 copies and putting them back in the platinum category. The album includes Love So Sweet, one of the group’s biggest hits and was used as the theme song for HANA YORI DANGO 2. 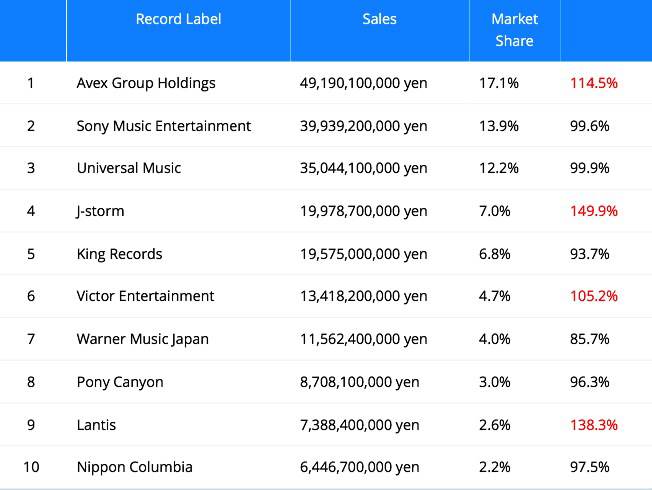 In fact, in more ways than one, it is still a little small company, with only senpais TOKIO and kouhais Hey Say Jump as its artists aside from Arashi. Of course, aside from music, it also produces movies including the PIKANCHI franchise, Arashi’s debut film released in 2002, the sequel in 2004 and the third installment last year.

To summarize the releases of J-Storm in 2014 according to artists (including the two subsidiaries):

The breakdown of their 2014 sales:

Now, consider this: Avex has more than 100 (I stopped counting at 100) artists under it including Hamasaki Ayumi, Exile and big K-pop stars. Same can be said for Sony Music Japan  and Universal Music Japan with a lot of big name artists under them too so it’s no surprise that the Big Three will dominate the market.

And now here comes little-small-big label J-Storm. Isn’t it indeed amazing to think that what started out as a small company dedicated to producing records for Arashi grew into the fourth biggest label in Japan? Of course, no doubt with the help of the other artists now under J-Storm too.

I just hope that Arashi have shares in the company because I would hate to think that all the fangirls’ “investment” wouldn’t even go to their retirement, and to assure that Nino could still pay his taxes even when he’s not working anymore, and the rest to enjoy the lifestyle they are used to (you know, Jun will always be fashionable even when he’s 58).