Blame it on Arashi, or thanks to Arashi, I discovered Tsuyoshi Nagabuchi, who was their guest in SHIYAGARE on January 31. Out of curiosity, I looked him up as there was  hoohah over his guesting and boy, was I impressed. He’s a singer-composer, actor, poet and human rights advocate. He is 58.

He’s not your pretty boy ojisan rock star; in fact, he looks more like a gangster but man, does he have personality, stage presence and longevity. He would put to shame younger musicians with the way he still puts up a show and brings in the crowd.

The video below is a good introduction on him and his work (it’s in English). He has a “deity” status in Japan:

He brings his dog to his concert too. 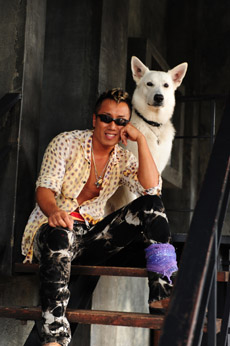 But what impressed me is his humanitarian work. A month after the 2011 Great East Japan earthquake, he went to the affected areas to talk to the people and also cheered on the Self-Defense Forces. More than his grand concerts, his performance before the soldiers are my favorites:

[Tonbo and Kanpai, first and second videos above, are my favorite Nagabuchi songs.]

Something has to be said on how musicians like Nagabuchi-san have a place in Japan despite younger talents, notwithstanding idols. Perhaps it does show the maturity of the industry as well as fan loyalty and culture. And I’m glad that through Arashi, I’m also able to know more about other musicians.