When I first heard of Mileage as the title of Jung Yonghwa’s collaboration with YDG, my first thought was: what kind of mileage is it? Airline mileage? What could the song be about? Will we be seeing JYH in a pilot uniform or something? Or as a traveler (I’m confusing this with his UnionPay commercial)? 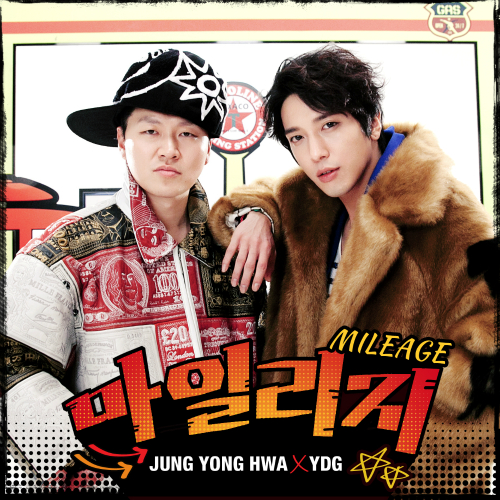 Of course  by now, we all know how the MV looks like. It’s made of crack, and the music is something that I certainly did not expect but it was indeed a pleasant surprise exceeding expectations. Or maybe I’m just a sucker for crack and coupled with Yonghwa’s voice and good music, then I’m sold.

I wanted to post about JYH’s solo album once it is out on the 20th but how can anyone resist Mileage? And if this is any indication on how the songs in his solo album would sound like, then we are in for a wonderful surprise.

There’s no doubt that Yonghwa is one of the most talented musicians of his generation. I love the music he creates for CNBLUE as a band and I also am loving his music as a solo act (counting Because I Miss You and his for-the-fans song, Star, You; and now, Mileage). He did say that his first album would reflect his musical taste and if we are going by the music he chose for his DJ stint on Beat, then it covers a wide range from rock to hip-hop to ballad and pop, and everything in between.

I don’t really like boxing musicians according to genres because that is so limiting and music is supposed to be all-encompassing and universal. And I disagree with the view that just because someone has a rocker image, he can’t do pop or ballads, otherwise he’d be thought of as going soft and mainstream. What does it matter the kind of music we do or listen to for as long as the message is carried across? I don’t even understand what the songs are about the first time I listen to my favorite artists, but we don’t listen to music because it’s about something that we can relate to, right? Rather, it’s because we can relate to the sound, regardless, that we open our arms–and ears–to it. And we fully embrace the song the moment we understand what it is about.

So yeah, I’m so happy to see Yonghwa exploring the musical realm the way that he may be unable to as a member of CNBLUE. Besides, if he will sound like the vocalist of CNBLUE in his solo album, then what’s the point of coming up with a solo album? Not to say it should stop him from being Yonghwa, the leader of the band, but you get the drift.

But there’s another surprise that I was in for–this album will be released digitally as opposed to actually dropping a physical album? Well, Mileage has been released as a digital single, and so was Star, You. I hope I just misread/misunderstood the information and that JYH would still be dropping a physical album too, aside from releasing it digitally. But I wonder how sustainable is this in the long-term for a musician like Yonghwa (and I hope that FNC is doing its job by registering the copyright to his songs).

Copyright and piracy have been very hot topics and especially since last year when Taylor Swift left Spotify because she believes it’s bad for music economics. She argued that music is art and artists deserve to be paid for it. Her argument has since been debunked by Spotify founder Daniel Ek in a really interesting blog post.

I’m a music consumer and I stream music and videos online, and download them too. But I also believe in contributing to the music economy, at least to those artists I support, because that’s one of the ways to keep them in the business. Perhaps this is because my orientation as a music consumer is J-pop and my eyes are keen on the Oricon charts whenever my favorite artists drop a single or an album. I buy physical albums and DVDs online and have them delivered to me maybe because 1) I’m a sucker or a fool; 2) I’m a collector 3) I  just like clicking that “buy” button and using my credit card. But since I got into CNBLUE, I had to learn to buy digital music, and I’m not even talking here of Digitalian.

But seriously, music is not free. We don’t need to pay a premium to enjoy it but at least we have to contribute to the economy that sustains it. It’s the only way that our favorite artists earn a mileage to give us more music.

No doubt that JYH has already earned his mileage as an artist, enough to release a solo album. He has been a prolific songwriter and composer for his band as well as for other artists.  And thanks to him too, mileage may soon become a buzzword and by the sound of it, may end up as a slang (who needs a dictionary when you have YongDictionary but in the spirit of elucidation since I see a lot of questions about it on SNS, the conventional meaning of mileage is earning points or benefits i.e. airline miles etc; In  YH’s song context, it’s YDG earning points from his wife to go on a boys’ night out).

So yeah, you earn mileage for anything and everything in life, including making more music in the future. So JYH, here’s to more music mileage.

P.S. For fun, when it was announced that Yonghwa will have four collaborations in his album, I made guesses. Below is the revised one but the original were: IU, YB, an FNC artist and a member of a male idol group.

I changed to JJ Lin and YDG after friends reminded me. Well, that’s one check and three more guesses to go. We shall know in a few days’ time.