Rainy cloudy fine today… as the Arashi song goes. It looked like the usual morning, nothing special.

0905: Arrive at work. Five minutes late today because the girl at my regular tea stall took longer to make my iced red tea.

0910: Check Twitter. Screw the news, work can wait. I need my dose of happy pills and good vitamins in the form of Arashi. This is how I always start my day, to get positive vibes from these dorks in order to make it through the day.

0937: Thanks to my best friend Mr GT, information on the new album became clearer. It’s called, brace yourselves (though if you’re an Arashi fan, you probably know by now), The Digitalian. 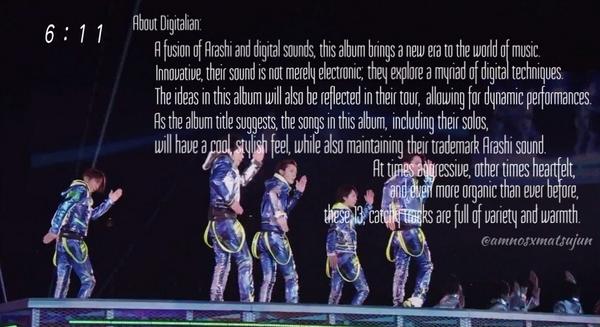 0940: My other bff Mr Oxford says there’s no such word. Yet. Guess, Arashi speak a language of their own.

1037: First word that CDJapan’s LE is now out of stock. HMV follows suit. Sold out, in less than an hour.

I’m not even halfway through my tea yet. And most importantly, I haven’t even ordered yet!!! YesAsia, dokko???

Last year’s album, LOVE, was so epic it’s at the top of my fave now after ONE (which was my fave for the longest time). I am curious and so looking forward to see how Arashi will top that. And by how LE has sold out fast, it seems everyone is eager to know too plus the fact that it has a “Making Of” DVD, something they haven’t done since… I can’t remember, just that it feels like forever. Meanwhile, the rest who were not as lucky to secure the LE will just have to settle for the RE.

It is always like this, you can’t slack if you’re an Arashi fan. I feel for those in the US and Europe because when news like this breaks, they’re still in lalaland or about to. And one never suspects that there’s going to be an announcement. In fact, the only clue they will have an album is if one of them writes about it (usually Jun’s Enjoy) or mentions on any of their shows (usually Nino’s radio show). But no word on the release date until you get that all-important mail from your friendly Japanese online store. Just pray that it did not go to spam.

And it does feel like the hunger games every time Arashi drops something. It’s not hype, it’s for real that copies run out whether albums, DVDs or concert merchandise.

This year is not just any other year though. It’s their 15th year and still going strong. For a group that did not think they will go past 10 years, it’s short of a miracle as what Jun said.

And so far this year, we’ve had two concert DVDs/BDs, three singles for the members’ dramas and merchandise for Waku Waku and Arashi Blast in Hawaii (that includes the Arashi National Stadium 2008-2013 photobook aka the Arashi Bible that’s 712 pages). Then this album and there will be merchandise for the coming live tour, which will obviously be called The Digitalian Live Tour 2014. Oh yes, the concerts, not to mention Waku Waku. All these mean okane. Money. Hard currency. It is expensive being an Arashi fangirl indeed that sometimes I do get the feeling that I work just so I can afford this lifestyle.

I do respect how, despite their market power, Arashi has never taken advantage of that. They could release a gazillion singles and compilation albums every year, or re-package their albums multiple times. Or maybe come up with Arashi Drama Themes or Arashi Sings For Films. Or how about “Making Of” This and That? Kokuritsu has six years of materials for a documentary (yes please!). TV shows BTS. Fifteen years worth of dorkiness in a DVD/BD. Heck, they can make a yearbook/photobook every bloody year. Just throwing ideas out there because certainly, there are a lot of materials available. Fans have been begging for the release of ONE and Dream “A” Live concerts and documentaries. Maybe Arashi is waiting for the time when they shall slow down on their activities before releasing such?

Whatever it is, Arashi never milk the fans like that. It’s not J-Storm’s style to repackage. So if you miss the LE, you miss it completely. And there’s that story that Arashi went into long discussions with their production staff to lower the price of their DVDs because as Nino said, they don’t want their fans to earn money so they can spend that on them.

But who cares? Money does buy you happiness. Whoever said it doesn’t has not met a fangirl.