I still cry every bloody time I watch MY SASSY GIRL (and I have lost count how many times I’ve watched it) and when this girl won the TV Daesang in this year’s Paeksang Arts Awards, I cried.

Credit on the pic

Sod all those members of Korean girl groups. They don’t hold a candle to Jun Ji-hyun. She’s beauty, class and elegance in one. She’s a living goddess without the aid of plastic surgery (though how her looks have remained practically preserved since she debuted has been the talk-of-the-town).

She first became a sensation in Korea through her Samsung jet printer commercial in 1999:

But to many of us, she’s simply “The Girl” in MY SASSY GIRL.

Looking at her body of work, JJH is quite choosy with her projects and not all of them have been successful, including her attempt to go Hollywood. But she’s a survivor and since her return to Korean cinema in 2012 through THE THIEVES, she’s been on a roll.

My favorite films of hers aside from MSG are IL MARE and WINDSTRUCK. And I absolutely adored her in MAN FROM THE STARS (a.k.a. MY LOVE FROM THE STARS/YOU WHO CAME FROM THE STARS) as the arrogant airhead actress Cheon Song-yi, the role which won her a Daesang.

I love how her character poked fun at the real JJH with her “unchanging” looks, among other self-parody. It made the drama very meta. And the way she hammed it up for the role without any reservations was very hilarious no wonder people fell in love with her and Do Min-joon (Kim Soo-hyun). Theirs is my favorite noona-dongsaeng onscreen/offscreen relationship and we all have to thank KSH for convincing his THE THIEVES leading lady to accept the role of Cheon Song-yi. Imagine if it would have been any other actress… no, I can’t even imagine it.

Cheon Song-yi and her manager, Do Min-joon (Credit on the pic)

The thing with JJH is, she’s pretty but that kind of look is in danger of being generic. Tall, slim, long straight hair, small face. Don’t most girl groups try to achieve that kind of look that it has become boring and too common? But with JJH, it’s not. She may easily fit the Barbie mold or the ideal Korean idol mold, but if you take a closer look, she does not really fit the standard to a T. She has a small nose and she sometimes appears cross-eyed. But do these take away her appeal? Not at all. In fact, it makes her all the more unique.

[Gawk at pretty photos of JJH on her official website.] 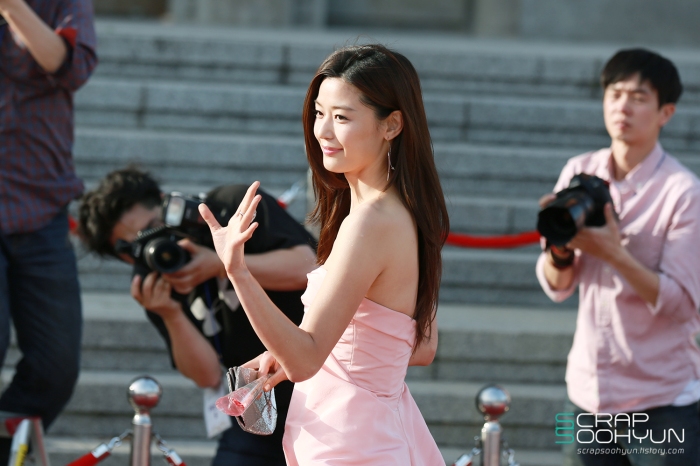 Credit on the pic

Watching her win the grand prize for TV at this year’s Paeksang, also the 50th year, felt nostalgic. MSG is part of my Asian Pop Culture 101; it was one of the first Asian films I watched (and my friend who passed it on to me almost ignored it thinking that the CD lying about in her brother’s room was a porn movie because of the title LOL). Though I’ve never really fangirled JJH actively, I’m updated with her work and having watched her in one of her early films and seeing her win a major award more than a decade later is like watching a tree bears fruit finally, it’s a rewarding moment. I just wish she was more spontaneous when her name was called but I guess that’s how goddesses react even in moments like this, nothing fazes them. Kim Soo-hyun looked even more ecstatic than her hahaha.

Though she told KSH in her acceptance speech that they should do another drama together, I’d be very happy to see her in another project. I’m even happier that a married actress like JJH still has a place in the entertainment industry and has earned it well.

2 thoughts on “[blog] from my sassy girl to goddess”