It’s tricky to be linked with Arashi or to even appear on one of their shows or act alongside them. Arashi fans, and particularly Arashi wotas, will have eagle eyes on you. Did you behave appropriately? And by behaving appropriately, did you keep a one-meter distance between you and the Arashi member? Did you address him politely? Did you keep it professional, meaning strictly no flirting? Did you initiate skinship? Did you show some sparks in your eyes when you looked at him? Actresses and models alike need to keep all that in mind and be careful not to give any Arashi fan grief.

I’m exaggerating of course but some fans can be possessive.

Seriously, I don’t mind all these females surrounding Arashi because it’s part of their work. But I look more at the level of awkwardness that’s present. I hate those female celebrities who act timid and coy, and who spend the entire show (in the case of Arashi’s variety shows) tucking their hair behind their ear, speaking in a tiny voice and avoiding eye contact with the members. The hell, are you here for a gokon (blind date)?!

I watch Arashi’s variety shows to be entertained that’s why I admire those female celebrities who are able to hold their own against Arashi. I’m sure it must be intimidating to be on their show. These are five guys that include a brat with the most biting quips and a diva who can turn you into a simpering maiden with just a glare. They’re also among the industry’s biggest stars so I can just imagine how nerve-wracking it can be especially for newbies. Or it can be exciting and fun.

There are three female celebrities whose appearances on Arashi’s variety shows I always look forward to because they make things interesting and hilarious to watch simply by managing  to stand their own and refusing to be intimidated by the bakas.

Her VIP Room guesting when HIMITSU was still airing was very funny, but it was her more recent VS ARASHI appearances that showed how she had grown some fangs in rebutting them, especially Nino, her co-star in GANTZ. If you’re able to fight against Nino’s sharp tongue, you’re fearless.

But really, extra points for being able to turn Arashi into her personal human pets. 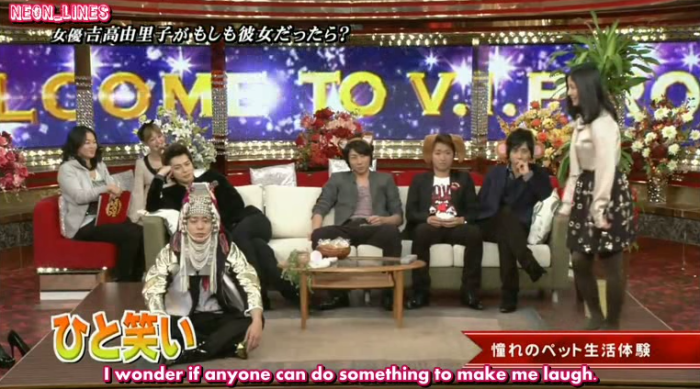 She’s actually younger than them but perhaps it’s because she’s married already that’s why I’ve always thought of her as their senpai. She acts like their troll younger sister especially in her recent appearance on SHIYAGARE. And the way she makes fun of Jun, who she’s known since high school, is something that only very few celebrities can get away with.

I mean, if you’re able to give foot and facial massage to Arashi, there has to be a level of comfort involved. Plus points for playing hide-and-seek with them and turning the NTV studios into one big playground. 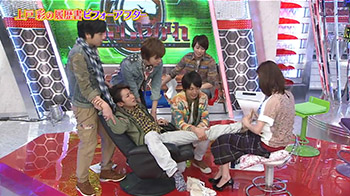 Ahhh, Ayashi (Ayase + Arashi, get it?) is my favorite Arashi pairing I ship them so hard LOL.

Ayase was still kind of akward when she appeared on SHUKUDAIKUN some years back but who wouldn’t be when typical boys started making fun of her Oppai Volleyball (literally Boobs Volleyball) and started demonstrating how it must be done? I actually felt sorry for Haruka-chan in this episode.

But she’s learned since and perhaps due to many appearances on their shows later including HIMITSU and SHIYAGARE. In fact, last night’s SHIYAGARE episode is the inspiration for this post because I love watching her and Arashi together. The chemistry between them and how they work well together was very evident in KOHAKU 2013. Ayase was so nervous and committed one gaffe after another (and yet remained adorable instead of irritating, how that was possible, only she can get away with it) but Arashi members helped her out a lot. Last night’s SHIYA also showed how she can even troll them now (but Nino out-trolled her) and gels so well with everyone.

The thing with Ayase, she’s not shy in being tennen and letting her hair down to have fun with the bakas. 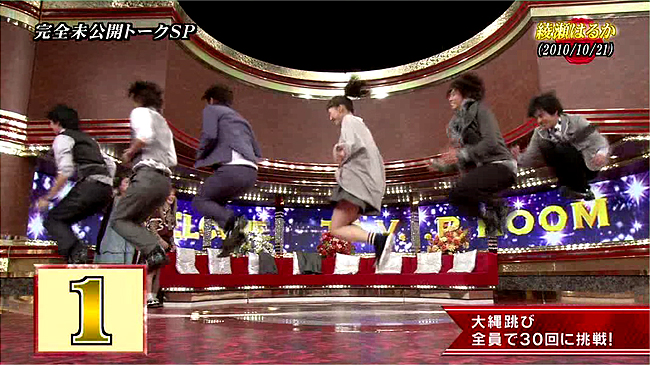 There are other runners-up like Kiko Mizuhara and Becky. If any of these girls end up in real life with an Arashi member, I would be very happy. Except Aya-chan, of course. I don’t think Hiro-san would be happy.