I’m sure somewhere in the deep recesses of entertainment agencies, idols are given workshops on, among others, how to conduct themselves the moment they step out of their private sanctuaries or how to handle fans who overstep the boundaries.

Different strokes for different idols though and not everyone is Ken Zhu who, at the peak of F4’s popularity, didn’t think twice about getting down from a car and scolding fans who were following him (I heard he still scolds fans on Weibo to this day).

I can just imagine why majority of idols would choose to tolerate bad behavior. They know that without fans, their hard work would not pay off and if they suffer from public backlash, their fans can abandon them at the drop of a hat. They know how fickle the cut-throat entertainment industry works and that there are other idols competing for a share of the fan economics.

Still, that is no license for fans to misbehave just because we buy their CDs and DVDs, pay good money to watch their concerts or films and invest time watching dramas. We should not hold our idols hostage and force them into unwarranted fan service by dangling the we-made-you-we-can-unmake-you card. Not cool.

I feel sorry for celebrities who have to grit their teeth and smile for the public even though they are being forced into a corner. No one wants to be a Lee Jongsuk, you know what I mean?

But there are idols who won’t tolerate bad behavior and three of them happen to be members of Arashi (yes, the whole point of this post).

Every Arashi fan, or at least those who have been around for long, knows how Sho was notorious for chasing fans away with an umbrella. This was during their Junior days, before Arashi debuted. Sakurai, so-called future prime minister of Japan (an Arashi fandom inside joke, okay), was known to be a bad boy who had his navel and ear pierced (a no-no in the jimusho back then). Of course he grew up, graduated with an economics degree from Keio University and became a newscaster. Arashi became famous too and so the responsibilities grew as well as the pressure to maintain a certain image. But we still see shades of the no-nonsense Sakurai every now and then, not withstanding those rumors of him refusing to shake hands with fans who lined up to donate at last year’s 24HRTV. (I don’t think having his hands clasped behind him at the reception line with the other members is the same as refusing to shake hands; and besides, they were not there for a handshaking event and shame on fans who lined up to “donate” but in truth were wishing to shake Arashi’s hands.) We all know though that Sho is very polite and accommodating. He just can’t tolerate those who disrespect their personal space and put them in a sticky situation.

This was around the time that Arashi was just starting to be famous. They didn’t enjoy the perks that they do now, like staying overnight in the city where they had their concert. So after the concert in Nagano, they had to catch the shinkansen back to Tokyo. And that’s when something unpleasant happened. The two youngest took to their blogs to write about it. 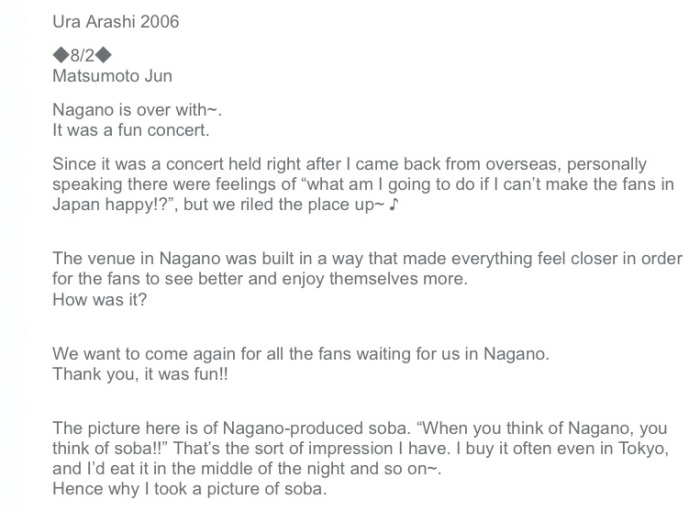 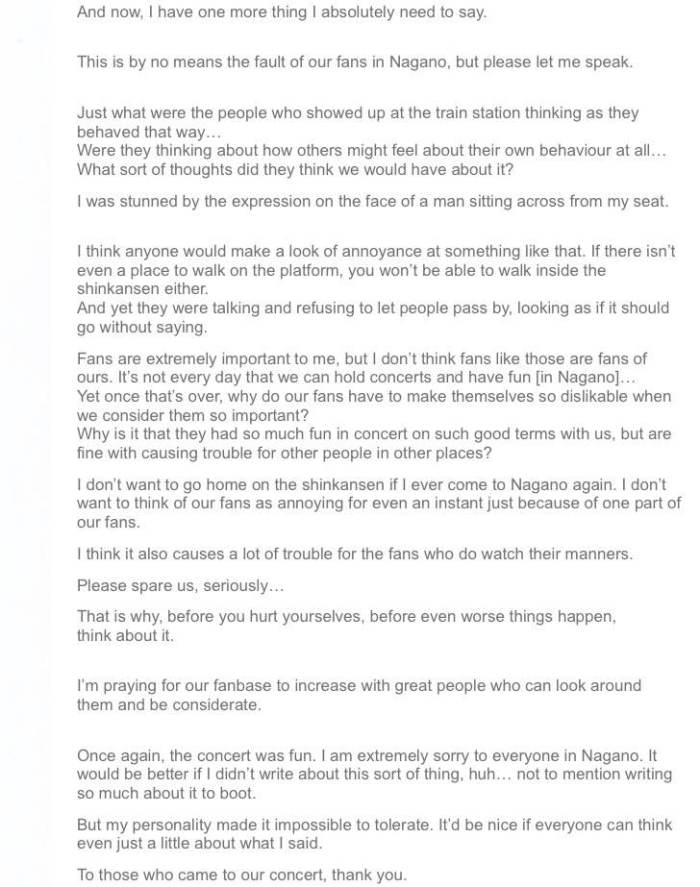 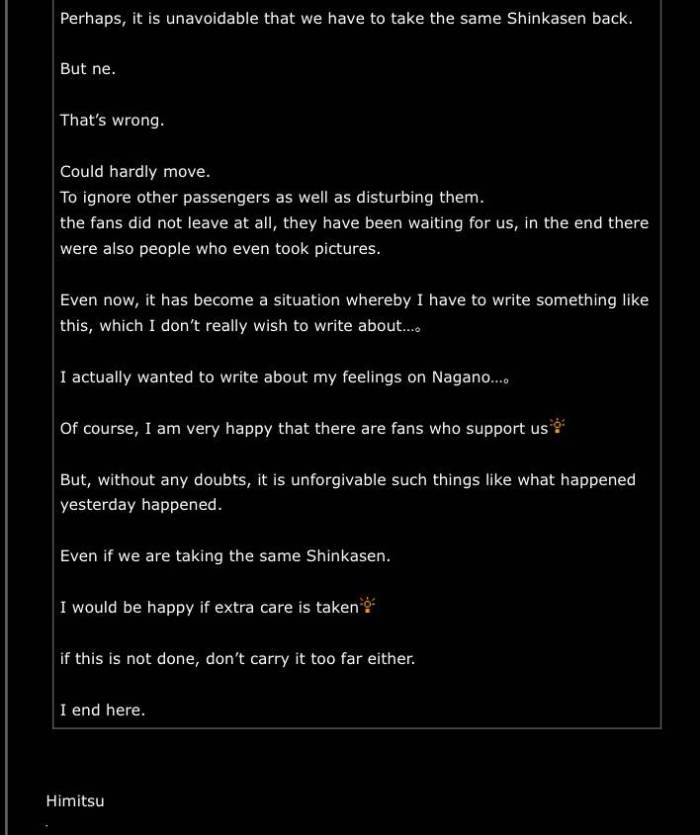 Jun is often described by the members themselves as like a “strict father” while Nino is the resident brat. So I am not surprised that of the five of them, these two were the ones who were very outspoken about that incident.

From some fan accounts I read during that time, the faces of Arashi were a cross between being embarrassed and angry. Those who have been to Japan know how extremely important it is for people to observe etiquette especially on the train. There are even signs telling you to not speak loudly on your phone. So I can just imagine how humiliated they must have felt. And considering that this was their pre-tipping point days, the group must have been with only a manager or two and no one else to protect them.

Those days too, they were more free to talk about anything in their blogs. These days, they are more mindful about the responsibilities that weigh on their shoulders before they open their mouths although I also doubt that they would still have the time to regularly write like they did then. 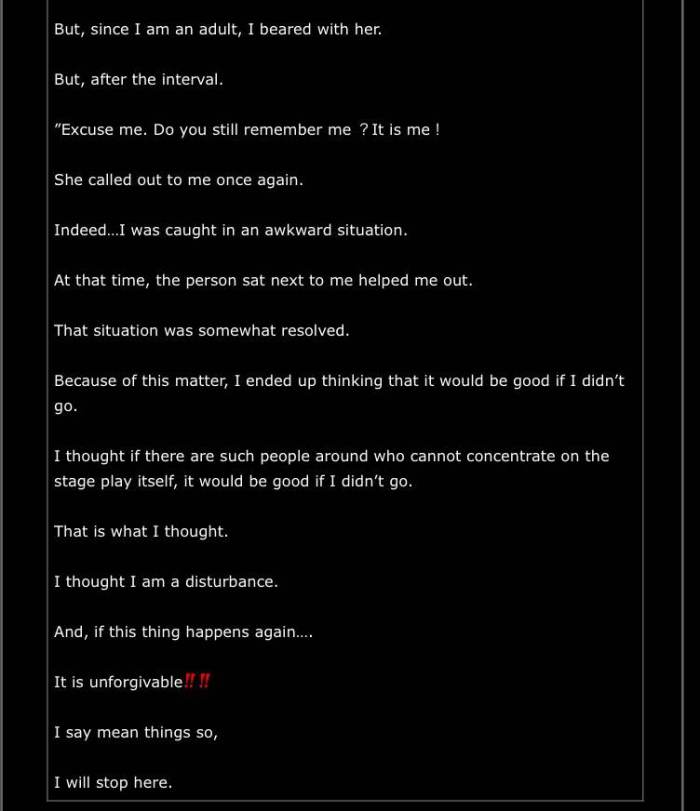 The entry above should make anyone think twice before approaching celebrities during their personal time. It does not mean that whenever they are in public, we can approach them any time because they are “public figures”. And once more, it’s apparent that Nino was embarrassed at how he was attracting unwarranted attention when it was supposed to be his friend’s stage play. I guess around this time, the Arashi members were also grappling with the changes around them brought about by their new-found fame, suddenly being recognized everywhere (which still surprises them even to this day, no kidding) and not being able to move freely as they used to.

Thus, this entry below on stalking: 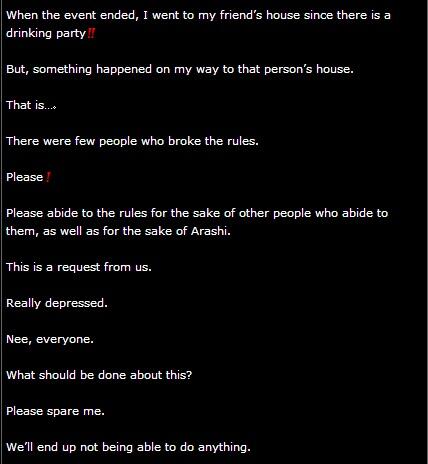 Yes, there are “rules” that JE imposes. You can’t take photos of or with their talents, you cannot follow them anywhere. That is why to this day, we still hear Arashi talking of them taking public transport like the train or taxi. And the breaking of these “rules” depressed the great Ninomiya that he even had to make an appeal, “for the sake of Arashi” to spare them from such stalking culture.

“We’ll end up not being able to do anything.”

Oh, the lament of every celebrity who cannot move around without the paparazzi and the fans following them.

I’m also glad that Arashi established their attitude of no-tolerance with bad fan behavior as early as then. Of course that doesn’t stop fans, especially those new and unfamiliar with the JE culture, to overstep the invisible lines. We see people (I doubt if they are really fans) who post the members’ personal data such as gas bill or receipts (proven fake) online. And sad to say, the sasaeng culture is slowly pervading the Arashi fandom.

Someone posted this on Arashi Confessions and I couldn’t agree more:

Just as I wrote a few days ago on fans behaving badly, let’s not forget that our actions reflect on the fandom that we come from and the idols that we support. So let us be the kind of fans that our idols will be proud of.

10 thoughts on “[blog] the shit that idols have to put up with, sometimes.”