It may be an exaggeration to say this — and words that I may be eating back sooner or later — but right now, MAN FROM THE STARS trumps all the other dramas I have watched.

I won’t dwell on the drama itself because I have previously blogged on the reasons why it’s worth a watch. Just to add: Aside from having an alien hero who has lived on Earth for 400 years, MAN FROM THE STARS also gave us a memorable heroine who was progressive and, as someone on dramabeans said, 4-D. Just a note on the ending: not everyone was happy with it but I was satisfied. It wasn’t perfect but it was logical without losing the heart and message of the story — which was fate and time. And that’s coming from an escapist like me who wants to be spoon-fed her happy ending. I suppose there are things in the universe that we are not meant to understand and that includes the star and the life that aliens like Do Min-joon inhabits.

Now with MAN FROM THE STARS over, I wonder what my drama life will be. I am curious about THREE DAYS, the drama following it on SBS. SBS has been on a roll with its dramas, including HEIRS, which rated even higher than MAN FROM THE STARS, and which is one of those things not meant to be understood either.

But thank you SBS and the whole production of MAN FROM THE STARS for giving us such a memorable work that stayed solid from episode 1 to 21. Congratulations on your success too! Special thanks to Kim Soo-hyun and Jun Ji-hyun for taking the lead roles, a lot of the success can be attributed to their chemistry and how they played Do Manager and Cheon Song-yi.

Just how do we measure the drama’s success? Let me count the ways:

You know a drama is successful when barely has it ended, there are talks of remakes and a movie version. I have never been keen on remakes but a movie version ain’t such a bad idea… IF ONLY it will have the same cast. No one can play Do Min-joon and Cheon Song-yi as well as Kim Soo-hyun and Jun Ji-hyun. Not casting them is a grave sin whether you’re human or an alien. Don’t even think about it. Not in this lifetime. Or even the next 400 years. Araeso? 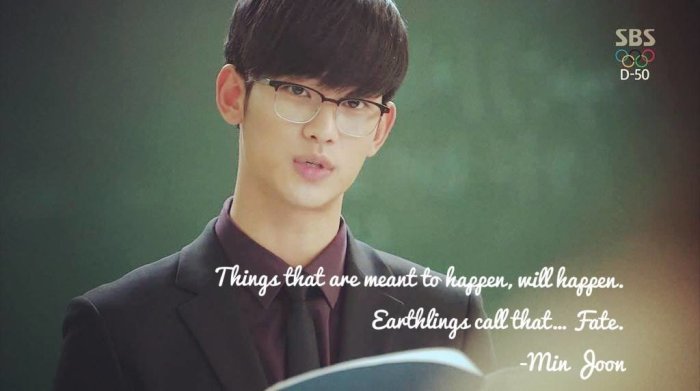 And just ending with this photo below because it has got to be one of my favorite moments in the drama:

11 thoughts on “MAN FROM THE STARS: remakes and a movie version, anyone?”