I was supposed to write this last night but then things happened. It’s funny because I used to say, “if my OTP comes out, I’ll buy everyone drinks”.  Well, they never did and never will but I still ended up buying myself a drink though getting drunk wasn’t part of the plan. And certainly, I wasn’t planning to celebrate my first anniversary as a sunken ship survivor with alcohol. It’s a good thing that it was Shippers Anonymous and not Alcoholics Anonymous that I fancied being a part of otherwise it would have been considered a serious relapse. The hangover this morning was unbearable enough I actually swore off alcohol even if the bottle says only 38% content. Now, if only I can swear off shipping too. 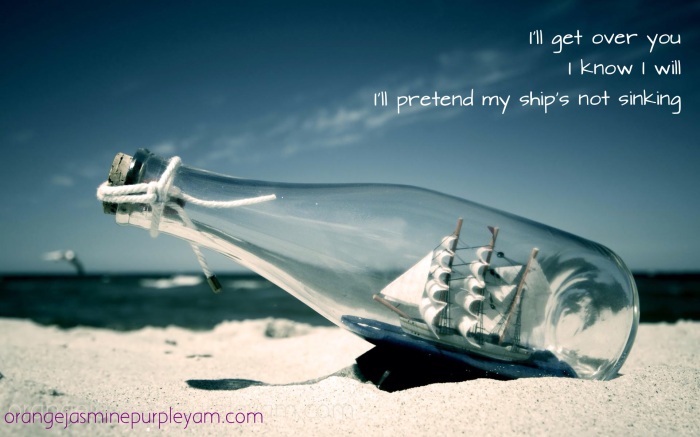 So yes, it’s been a year since I “officially” resigned as a fan of the girl-half of my now ex-OTP. And it went without saying that resigning as a fan of the boy-half followed. Though if I were to be truly honest, I was a fan of the pairing and not of their individual careers. So when the ship sunk, there was nothing left for me to hold on to, not even a driftwood.

It was quite a journey. I shipped them for five years and it reached a point that I was only holding on thinking of the time I have invested in them. They were a part of my daily life. I tried to find connections to them everywhere. My heart would skip whenever I see the word “smart” or “RM”. I stalked their and their friends’ social media. I wrote fan fiction that if I had them published, I’d probably be earning royalty now. I even interviewed them (separately). I asked OTP-related questions and thought I got the answers I was looking for and which made me believe all the more that this was not just your ordinary pairing; this was for real. Along the way, I met friends. And I lived in delusions.

I know how it is to be a delusional fan. Those “theories” of shippers such as matching jewelry or clothes, simultaneous tweets, “revealing” interviews, second-hand information of sightings? Been there, done that. And I believed just like how shippers believe in their own theories and delusions.

To be fair, all shippers are delusional… until the pairing becomes real. Not real in our dreams or in our delusions but actually them coming out saying “yes, we’re dating” or “yes, we’re getting married”. Oh and gossip that disguise themselves as news do not count. And until that happens? It’s all just speculations and delusions.

I recently spoke to one of my friends I met through my ex-OTP ship. We’ve all moved on, no more delusions and we don’t talk about the ex-OTP now like they were our nextdoor neighbor. One thing my friend said struck me and made me teary-eyed. She said that it was the ex-OTP and the fan fiction on them that she read that helped her get through a difficult moment in her life. And if only for that I thought all the ups and downs of shipping were all worth it, because it helped someone’s life.

Well, there were the happy, memorable moments. And there were selfish moments too with me thinking that this is one of life’s non-negotiables. They have to end up together come what may. But that day I decided I had enough of drowning myself more in delusions, there was no turning back. I deleted all my bookmarks on them, informed my friends of my decision just so they won’t be surprised why I have suddenly become inactive and tried to focus on other things. It was cold turkey and it was hard at first. Sometimes I’d sit in front of my laptop, my fingers itching to check their social media accounts but alas, and it was a good thing, my bookmarks were all gone.

A year later, I’m happy to say that I’m in a good place. I am no longer curious about them and it doesn’t matter who they end up with, it doesn’t even matter if they are happy or not with the choices they make in their lives. They’re no longer a non-negotiable item in my life. Some may say I was foolish in the first place to give importance to something I don’t have any say nor control in, but well, maybe I had to go through an inconsequential experience just to learn my lessons.

Oh and the lessons learned, which all boils down to one: Never take shipping seriously again.

Easier said than done though. I still have my OTPs. I call them sushi OTP and kimchi OTP. I may not ship them as hard as I did the ex-OTP, I may no longer have the energy to write fan fiction on them, but I still wish them to be together one day. Maybe I never learned my lessons after all or maybe I’m just naive or a hopeless romantic.

8 thoughts on “[blog]: notes from a sunken ship survivor”