I first watched Takeuchi Yuko in PRIDE with Kimura Takuya. It took me a while to get over that drama and the next time I saw her was in BE WITH YOU. Fast forward many years later when she co-starred with Matsumoto Jun in NATSU NIJI.

I can’t blame producers if they cast Yuko in hapless female roles. Her features are so fragile that she’s perfect for the damsel in distress roles. But that’s the problem seeing her as the romantic lead, I can’t see any growth in her work.

However, it’s a different story when the genre is action or suspense. I read good reviews about STRAWBERRY NIGHT and though I haven’t watched it, I am not surprised that Yuko is after all capable of acting beyond just the hapless female in dire need of her prince charming. This is very true in DANDA RIN, where she plays a labor inspector who is feisty and gungho. 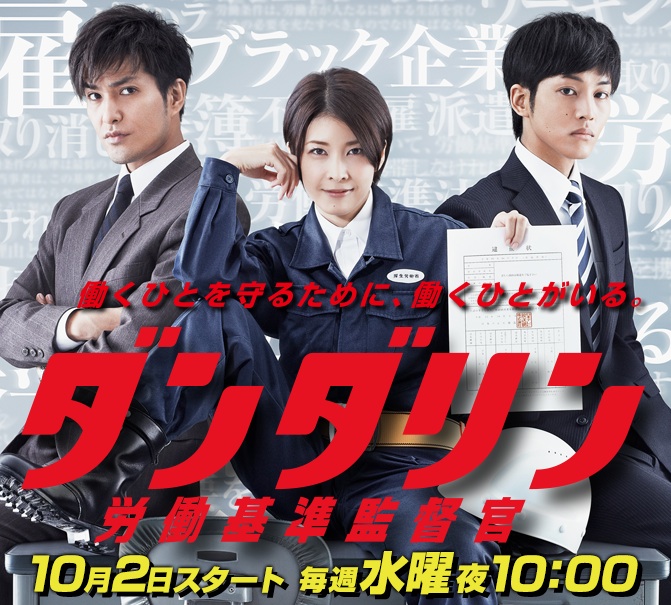 There are many reasons to love this drama and I list them below:

The first episode opened with the whole team going to Danda’s apartment. It’s empty except for a fish swimming in a tank,  a pretty dark blue Siamese fighting fish that sort of matches her feisty character. Based on their conversation, it appears that something happened to Danda. Dead? Kidnapped? Hospitalized? I have no idea and I don’t know if reading the manga will clear things up.

Then the drama goes back to when Danda was reassigned to the Tokyo office. She is totally the anti-thesis of the stereotype we know of government employees: lax, lazy, laidback. She’s strict, meticulous and uncompromising. It’s interesting to see the dynamics develop between her and Minamisanjo, who is calm and sometimes detached.

One doesn’t have to be Nino to appreciate this drama. Plus you need to see Yuko’s Danda Rin growl like a dog.