And I am glad that Arashi had the chance to work with him in their newest song, P.A.R.A.D.O.X. And who knows, their dance steps that Mr Knight has choreographed for them will become a dance phenomenon just like Beyonce’s.

I don’t know much about dancing but I respect talent. And I celebrate hard work. Mr Knight and Arashi obviously have that in common. They won’t be where they are now without talent and hard work.

But for fans to sound like Arashi did not know how to dance or do sexy before Mr Knight came into their lives? That’s too much undeserved hero worship and I would be insulted if I were Mr Knight. I’m sure, in the first place, given his very rich resume, he wouldn’t waste his time working with mediocre talents. He’s earned that right to choose who he works with. And it’s S.O.P. that before agreeing to work with Arashi or anyone else who wants his talent, to check their work and background. And really, I am curious to know what he thinks of their dance steps and their PVs such as CRAZY MOON, MONSTER, BELIEVE, ENDLESS GAME and BREATHLESS. Oh and yes, TOKEI JIKAKE NO UMBRELLA, because guess what? I would say that Riida’s choreography on that one rocked.

This collaboration, it’s not just a one-way street. Arashi is not small time in Asia, and certainly not in Japan, the biggest music market in the world. Arashi is Japan’s biggest pop act selling millions in CDs and DVDs. This “exposure” in Asia could even open new doors for Mr Knight and I’m sure he’s open to that considering how he’d like fans to spread the word about him. 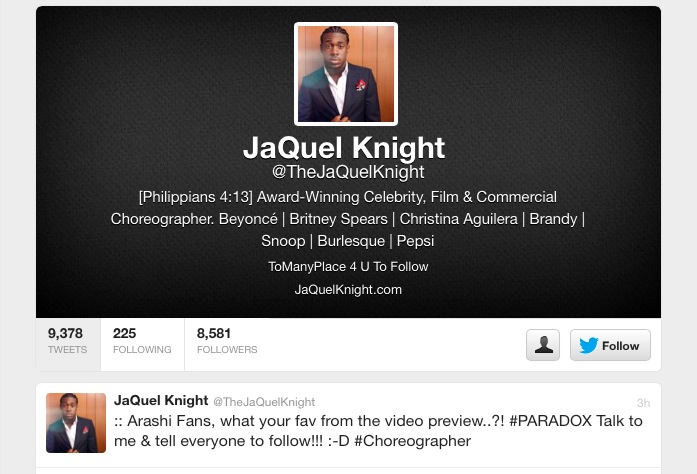 See, the more Asia knows about him, the wider his network will be. Have I already mentioned Japan is the “biggest music market in the world”? Bigger than America? Don’t give me shit that he doesn’t need it because he comes from Zee United States of America. And I suppose much of the “worship” I’ve been seeing on social media comes from this colonial mentality. Well, I have two words: government shutdown. Oh, and globalization. But let’s not go there.

At any rate, thank you Mr Knight for working with Arashi. I hope you get your psychic rewards from this part of the world apart from the talent fee you got from Uncle Johnny. It’s an honor and a privilege for Arashi (though I can’t speak for them) and I hope you see it the other way around too. But sorry, I won’t follow you (not that it matters because hey, you got thousands of followers already while I’ve got what, a hundred?). I don’t need anyone to tell me that Arashi is MAJOR. I’ve known since 2005. I can decide for myself.