It was just a matter of time really so no one should be surprised. But yes, America is doing its own version of HANA YORI DANGO. And they’re calling it… are we ready for this? … BETWEEN BOYS AND FRIENDS.

More information on the cast here.

I know incredulity is a natural reaction for a fan of the Asian versions of the drama. I love the Japanese version the best though the Taiwanese one is special because it started my fascination for Asian pop culture. As they say, let’s keep an open mind though based on the track record of how Hollywood mangles such products like INFERNAL AFFAIRS, MY SASSY GIRL and IL MARE, I don’t think anyone can blame me for being wary.

How about Dao Ming Si?

“Get ready for that red card, commoner.”

I don’t know anyone in the American cast but my first reaction was: When was Domyoji all about the muscles? It was always about the curls!

Let’s take a look at the Asian versions of the iconic Domyoji, including one who got the perm horribly wrong. 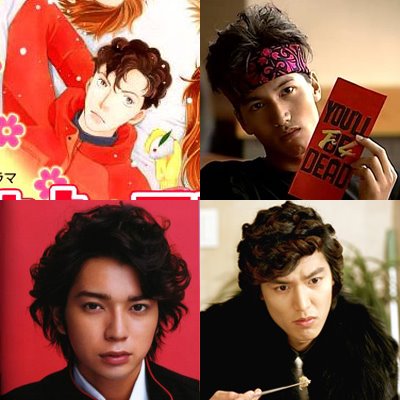 I suppose, America was not contented with Gossip Girl.

P.S. Just a clarification. That American thing? It’s NOT a remake of BOYS OVER FLOWERS. BOF was a remake itself. Granted that the literal translation of HANA YORI DANGO is “boys over flowers” but the original material was a shojo manga serialized from 1992 to 2003, which was made into a movie in 1995. TV Asahi produced the anime in 1997. The first one to do a live drama adaptation was Taiwan in 2001 through METEOR GARDEN. Japan’s TBS did its own adaptation in 2005 with HANA YORI DANGO. Korea’s BOF was aired in 2009. Just sayin’.

7 thoughts on “say what?! an American remake of HANA YORI DANGO?!”