Or rather, when the Mandopop king resurrected the Taiwanese songstress for two nights at his concert in Taipei.

Jay’s concerts is one of the must-see among Taiwanese artists. He always has some surprise up his sleeve and in this instance, it was the hologram of the deceased singer, beloved among the Chinese (she sang The Moon Represents My Heart). A report on the virtual collaboration here. 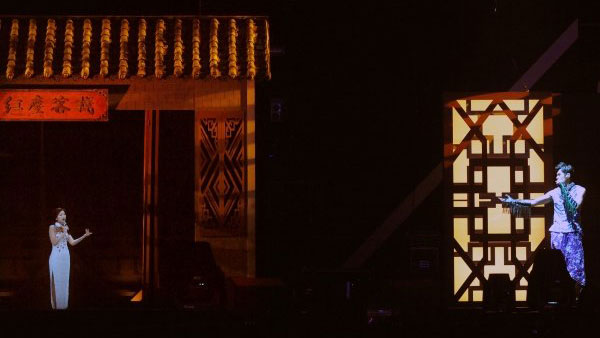 I guess it was too cliche for Jay for him to sing Moon Represents My Heart with Hologram Teresa. That song though is beloved among the Taiwanese. I’ve seen how my Taiwanese friends tear up whenever they hear that; it’s practically their national anthem.

Speaking of the surprises in Jay’s concerts, here are some of them.

My top fave: Wilber Pan guesting in the 2007 concert where they sang Listen To Mama plus a bonus of Chow Yun-fat (OMG) in the video and Jacky Cheung (double OMG) singing in the video too. Can I say I just like Pan Shuai, he’s one of the most hilarious guys in Taiwan e-biz.

And for the Double J shippers, there’s Jolin Tsai’s appearance in the 2010 tour.

Whenever I watch these two, I become a Double J shipper. Their story is just so bittersweet it looks like a plot of an idol drama: two rising stars fall in love, their secret relationship only revealed when he’s caught cheating with another girl in Japan, the break-up afterwards and no-talking for years as they became successful in their respective careers until they became each other’s king & queen counterpart in the Taiwan music industry. It sounds like a romanticized version but the Double J story is really what that is. Quick, someone make an idol drama out of this already!

Then of course, there’s Mayday just last week, which I blogged about here.

And it’s true, Jay Chou’s music is already awesome in albums but it is best enjoyed live.

Just listen to the audience singing along with him:

Damn, I want to watch him live again.