So a few days have passed since the supposed bombshell of Shuukan Josei was supposed to come out. Here’s the “most awaited” issue and here’s an update that should end the speculations. For now.

It’s funny how the rumor took a life of its own and just morphed into a grapevine catastrophe. It reminds me of the rumors about footballer Park Ji-sung and actress Kim Sarang that started when they filmed a commercial many years ago and just consistently “developed” over the years to the point that, from “dating”, they became “engaged” and “about to be married”, complete with details that the hotel had been booked and a date had been set. Well, guess what? None of that was true. In fact, the truth was later revealed that the footballer is dating an SBS announcer.

Those who have been closely watching the Shuukan Josei rumor unfold on social media would know how the speculations reached a point of insanity last week that someone was actually prompted to make this Arashi confession. Disclaimer: No, it was not me but obviously, I’m not alone in that thinking.

Let me get this straight:

Now, everyone’s free to make speculations. But it’s one thing to ship your favorite drama pairing and another thing to peddle your delusions as the gospel truth.

Also, it’s one thing to ship your OTP–for fun’s sake, for whatever’s sake–but another thing to shove down your beliefs in every forum and every platform you can find, and expect everyone to agree with you.

My opinion may not be popular but I’m not one to just hold my peace. Besides this is my blog.

Let’s just get on with the program… please play the wedding march! 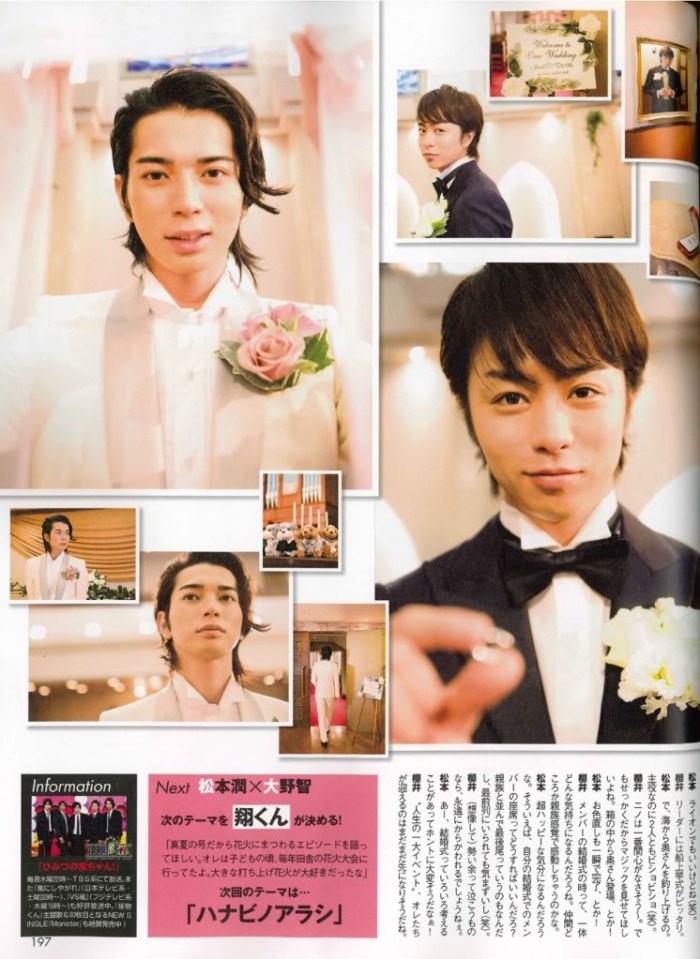 Side note: this is not the first time that Shuukan Josei came out with a “threat” to drop a bombshell. Last year, they even had the temerity to mention Sho, saying they’re going to reveal something bad about him that his fans will find shocking. Well, they never did. Either Johnny killed it, just like it possibly did this time around, or that the bomb may have been a lemon after all.

I need a drink. Let’s toast to Sakumoto!

5 thoughts on “wedding no Arashi”