I wanted to write about this on Monday, when the “great reveal” is made; when we shall all know whether the extra wrinkles, sleepless nights and the paranoia were all for nothing or whether we should start preparing for our hiatus from the fandom world.

But I had to get it out of my system. Six days is just too long to sit still though I really do not want to add to the wild speculations and the craziness going on out there. Because the truth is? I don’t know who that member of the “super idol group” who will be getting married is. Like many others, I have my guesses and fears, but it won’t help anyone–much more myself–if I dwell on them.

What am I yakking about? Why, this rumor of course. 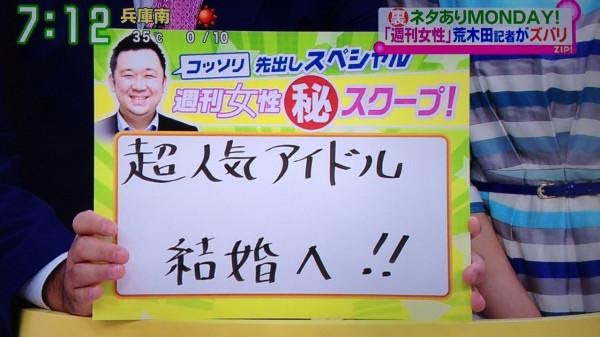 Just like there is cancer scare, there are specific scares that  come with the territory of being a fangirl. There are many fears that hover above us like a shadow and I am not talking about not winning the lottery for tickets to a concert or not getting our hands on the limited edition CD etc. There are scares more potent than being scared of ghosts or even death itself:

Dating Scare – While we flail over how kakkoi and handsome our idols are and fantasize about them, we know we can never own them outside photobooks, magazines, albums and DVDs. We are also very well aware that like you and me, they’re human even if we treat them like living gods: they make mistakes, they have imperfections, they are free to date. Mercy on those who are rumored to be dating them because hell hath no fury like a fangirl scorned.

Break-up Scare – And I don’t mean a break-up in connection with the Dating Scare (that won’t be considered a scare but a “yay”). When you’re a fan of a group, this is a constant fear, especially when said group becomes so prominent and the members start being compared and pitted against one another. Let’s not forget that these idol groups are made up of strangers thrown to work together. They have different personalities and temperaments; they have egos and their goals in life may also not match. There will come a time that such differences may be put to a test and if the foundation–wrought about by years of training and working together–is not strong, everything will crumble. United they stand, divided they fall. And the fans will be divided as well, their loyalties put to a dilemma. Ask any TVXQ or KAT-TUN fan.

Disease Scare – We worry about them like how we would for our family and friends; heck, sometimes we worry about them even more than we worry for ourselves. Just the thought of a world without them sends us on a downward spiral. Okay, I may be exaggerating a little bit but imagine a life without Nino’s usual snarkiness or Sho’s regular fails, that entertain us and remind us that sometimes we don’t have to take things seriously (including any of these scares, maybe). A life without rainbow sparkles? Scary.

Death Scare – See above. Accidents and anything can happen. We never know.

Retirement Scare – Some day, all of this will end. Even the stars in the milky way have their own life span. Nothing lasts forever, not even fame even when, at the height of it, we tend to think that everything is just endless. It’s not only the loss of fame that may trigger a retirement though. It could be other things, like running out of gas (to be frank, I would respect entertainers who know when to quit while they’re still ahead instead of forcing it and giving their audience half-assed efforts; if their hearts are no longer in it and they’re just there for the money, isn’t that insulting their audience?).

Marriage Scare – More than the Dating Scare, this has a sense of absoluteness in it. Perhaps because we all believe in fairy tales and that marriages are supposed to last forever, like you know, the way our grandparents had theirs. So when we hear of marriage rumors, we can tangibly smell and see the end. And admit it, that little pinch in your heart has also something to do with that lucky girl who gets to marry your idol, the one you wished would marry you instead.

Scandal Scare – This encompasses all the other scares that do not really fall into any of the categories above. Something along the lines of ridiculous, unbelievable or sounds like fan fiction. Sometimes, they can even be hilarious (like that rumor of MatsuJun frequenting a bar in Roppongi and asking girls who want to kiss him to line up). They are usually a product of over-imaginative minds or aimed at selling magazines or spiking the ratings of a show. It’s surprising though how there are still people out there who take such rumors hook, line and sinker (Ohno would be happy if this were related to fishing).

Meantime, the Marriage Scare has spread like wildfire in the JE fandom since yesterday, thanks to that Yomiuri TV report. That particular edition of Shuukan Josei is not due until August 19 and frankly, did they really expect fangirls to remain sane within that period? There has to be a special hell for those people who put fangirls through wringers like this I swear.

Now, if the rumored marriage has something to do with an Arashi member (I’m looking at this from the POV of an Arashi fangirl because, well, I am one, even if the rumor can mean any other member of a “super popular idol group” that may include SMAP and TOKIO), I wish I could be mature and say I wish him and the girl happiness. In public, and for the sake of peace on earth, I’d say that.

I am not delusional to think that Ohno, Sho, Aiba, Nino and Jun would remain single for the rest of their lives just for my and their fans’ sake. I won’t even try to think they are not dating anyone right now. Jun, the youngest, is turning 30 on the 30th of this month. In the real world, they are of marrying age already. Heck, Ohno is 32 years old. Guys their age have kids already. But then, we see SMAP and we have Nakai who remains single at 40. Not that it’s a crime. Getting married and having a family ain’t for everyone, some people are just happy being single. But the point is, idolhood does not appear to be conducive for marriage and that can be cruel to those who want to settle down.

Saying that, however, I wish there will be psychological preparations. You know, let’s start with the Scandal Scare. It will reach a level we’d be immune to that nothing will shock anymore. Then let’s proceed to the Dating Scare. Paparazzi photos. Reports in the media (and I don’t mean Cyzo and Arama, and definitely, not fans’ blogs based on their tin-hatting). All I’m asking for is some time to get used to the idea. Not George Bush’s shock and awe. And not KimuTaku’s tearful announcement in a concert following bombastic news of a shotgun wedding. Let’s do it step by step. Dating. Before wedding. That’s all my frail fangirl’s heart is asking.

And now, word on tin-hatting: It’s not wrong, it makes many of us happy. I’ve also been a super shipper before (my current shipper self  does not even measure to the one I was, believe me). Did the whole Monty from even digging into the personal accounts of friends and families of my ex-OTP just looking for clues. Believe me, I saw clues. Many clues. Many coincidences. I had reliable information, some coming from them myself (information I admittedly had an advantage to given mu job).  How could I have lasted on that ship for five years if I was only holding on to bare threads? But in the end, I was carried away by my own delusions of fairy tale. And now, I have learned my lessons and become more wary.

So yeah, speculations, tin-hatting, they’re also part of the fandom territory. But I’d prefer to wait it out and see on Monday and in the meantime, I’ll just limit my tin-hatting to my fanfiction and a few of those who would get it.

I need a hard drink.