Yes, I am a distance learning student of Arashi’s Waku Waku Gakkou because I never attend school at Tokyo Dome. Instead, I attend school “online”.

School sounds even more fun this year and the curriculum even more interesting. So interesting that it has led to existentialist questions prompted by the five Arashi sensei. 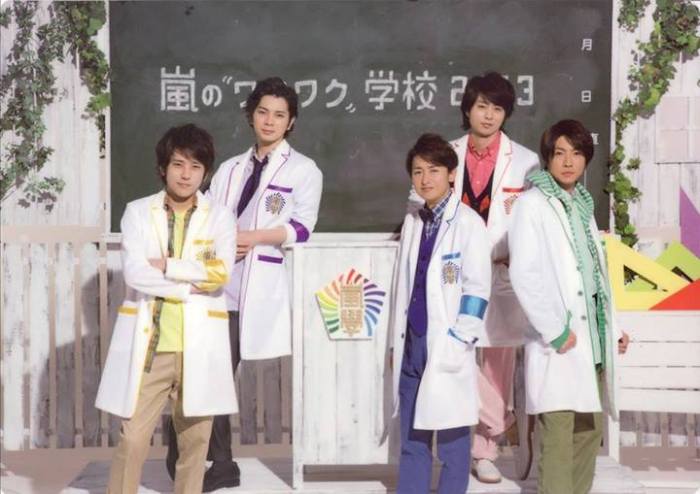 Ninomiya-sensei’s lesson is about the quality of sleep. Insomnia is really a serious problem in this day and age (case in point: I’m writing this when I’m supposed to be sleeping or at least preparing for bed already). I am on the Internet at work the entire day and when I go home, I de-stress by… being on the Internet. Before I know it, I’ve spent the entire night online. There are just so many things to do: blog, read, watch videos, chat, tweet in between, check Facebook… the list goes on. I am often amazed at the time. Why is time so slow when you’re at work and not fast otherwise?

Sometimes, like Riida, I am so tempted to just sleep on the couch instead of moving to the bedroom. But unlike Aiba, I don’t like sleeping on a hard surface. The couch gives me a sore back. And for someone who likes sleeping (Internet, what have you done to me?), I stay away from my comfortable bed until my eyes could not open anymore.

Like Jun, I have another layer on the mattress and it’s soft and comfortable that the moment my back touches the bed, I’m already in la la land. But I do have this weird habit of waking up between 2 and 3 in the morning, something like sleep walking though I’m very much aware of what’s happening. I’d get out of bed, as if I’m looking for something. Sometimes I’d go to the living room, other times, I’d open the French door of the bedroom. But I don’t know what I’m looking for and I’d go back to bed. It happens almost every night and when it doesn’t, I’d have weird dreams instead and I’d wake up remembering the dream and feeling relieved that it wasn’t for real. I wonder what Nino-sensei would say about this?

Maybe I should make myself a scented paper and try to envision Sakumoto so I can dream about them. Because as Nino-sensei said, if you sleep right, you’d have good dreams. And it will make our lives happier.

This is the lesson of Keio boy, Sakurai-sensei and as expected, Nino-sensei is his most eager student.

Who likes money? Who doesn’t, right? Money makes the world go round, and it certainly helps in fueling expensive hobbies like… Arashi.

Now, which is more expensive?

The price should be the same ($15), although with shipping if you’re an overseas fan, the cost could reach almost $20-$30. Yes, for a shirt alone. But hey, the 24 HOUR TV ones were designed by Ohno-sensei and Nara/Murakami/Kusama so the value is greater. World-famous artists aside, an Arashi concert shirt is priceless, especially if you have been to the concert yourself. Money cannot pay for the memories and experience itself, deshou?

Now, which is more expensive?

Ah, this is tricky. At $50, a concert DVD is definitely cheaper than a concert ticket, which is around $70. But add in the shipping if you’re overseas, then the DVD becomes as expensive as the ticket. But, and this is the big but, if you are not from Japan and does not have a chance of becoming a member of the fan club (because you need a Japanese address for that–and I am this close at swallowing my pride and asking my respectable Japanese colleagues to apply for a membership for me), you can only get tickets through auction (with prices reaching an unbelievable $1,000, which is just so cray cray and yet there are fans willing to pay that) or risk flying to Japan and standing outside the concert venue with a sign that says: “Will work for Arashi concert ticket.” Now, add the cost of travel and accommodation, a concert ticket is definitely much much much more expensive than $70!

That’s why I’m hoping for an Asian tour but that is definitely not happening this year.

And yes Sakurai-sensei, you don’t have to tell us that money is showing appreciation for the things we buy. Just ask fangirls who are willing to pay top money to get to your concerts or buy DVDs, shirts and other merchandise. But seeing all the hard work that you guys put into whatever you do, it’s really worth everything we own. Here, take our wallets and popcorn!

Lesson 3: “Paku paku” (is that chomp chomp in English?)

Seriously, I do not know why Aiba-sensei is the one doing the cooking when they have a Master Chef-wannabe in Matsumoto-sensei. But then, it’s A no Arashi all over again… or something. And it’s hilarious how Aiba-sensei orders his assistants around and makes a lot of mess himself. Yes, that’s the son of a Chinese restaurant owner right there. I don’t think he will be inheriting the family business in this lifetime.

Back to Aiba-sensei’s lesson, it’s interesting that it’s actually biology in disguise (aside from a lesson on what-not-to-do-in-the-kitchen). I love the part about how seasonal food is, and what’s the best time to eat what. Unfortunately, in this era of GMOs, that’s becoming a lost way of life. But in Japan, they still have that, serving ingredients that are in season. It makes you appreciate the food you eat knowing they’re part of a cycle.

Of late, I’ve been enjoying making dinner. It’s not only therapeutic but also fun trying to come up with a meal out of the ingredients I have in the fridge. And most of them are inspired either by Bambino or the real Bambi himself, Matsumoto-sensei, a.k.a. the tofu-loving nut. It’s true, his diet is effective. I have lost two stones already.

I don’t really think of seasons when I eat what I eat. I just think… this is when I start to lose the fats around my tummy or the tofu starts to taste delicious just thinking of Matsumoto-sensei.

Ohno-sensei’s lesson is my favorite of the five because it’s so fun and so meaningful. (I’m still looking for an actual video when he dresses up as a lion and scares the other four to illustrate the differences in their personalities.)

This is also the lesson (and Lesson 4) that brings about existentialist questions about life in general.

Ohno-sensei asked: “Why did we become Arashi? Why are we friends?”

I’m just going to quote what he said on the first day of class:

“Friends are not just the people you meet more than once. What you should do is notice the personalities of the people around you. They say that to sing in a chorus, you need all kinds of voices; high, low, pretty, rough. The depth born from that is what makes it so good. If we recognize our differences, then it would never lead to bullying. It’d be great if bullying would disappear. Just like Arashi has five different individuals, try meeting different people and making new friendships.”

I cannot say enough how I love, love, love how Ohno-sensei illustrated people’s differences by using Arashi as an example because that is so true and so apparent, and yet, here we see five people getting along so well and enjoying one another’s company, that their work does not look tedious at all and our lives feel lighter just watching them. They make life and friendship look so easy (and we all know they’re not easy) that it’s so inspiring.

Another favorite quote from Ohno-sensei’s lesson:

“By chance, we met, but I want to believe it’s fate. I’m grateful for it.”

Indeed. If one member is different, Arashi will be very different. That’s why I’m also glad that it’s these five.

I saved this for last because Matsumoto-sensei’s lesson about time really resonates.

We often take time for granted. Oh it’s fine, I’ll do it tomorrow. When tomorrow comes, we put off things again. And before we know it, we have lost time forever. Just ask a doctor unable to save a patient because those seconds made a difference, or a driver who was unable to step on the brake for just a mere one second, or, well, failing to click on that auction button for an Arashi concert ticket by a moment’s hesitation, and then it’s taken.

Incidentally, I came across this post by Arashi Daisuki on Hatori-san who planted those time capsules with Arashi at the end of Mayonaka no Arashi. I’ll quote from the post:

Isn’t that so beautiful?

Hatori-san recalled that 10 years ago, these boys were still taking the train to work. Today, they are Japan’s top idols, red carpets being rolled for them wherever they go. They have been part of Kouhaku, even hosting the iconic program twice already and having shows on Golden Time. I mean… wow. It’s so nice to look back especially when you didn’t expect things to turn out this way but at the same time you know these guys deserve every success they have because they worked hard to achieve their dreams.

I’m sure we have memories of 10 years ago. For me, I lost my dad then took an Oxford journalism fellowship then later moved to Bangkok. I became an Arashi fan, traveled more, learned more. I feel the same yet different. Maybe I should write a letter to my future 10-years-from-now self to make things more vivid?

These are some of the questions I want my future self to answer:

There are so many cliches about time.

A moment gone is gone forever.

You only live once.

Life is not a dress rehearsal.

I shall take Arashi’s lessons to heart.

For a change, let’s have some WHITE wine, shall we?

2 thoughts on “lessons from Arashi-sensei”