(Edit: I changed the title because not a few have lectured me about stirring the hornet’s nest. I guess the context and the joke in the title is lost on many who claim to be existing in a fun-filled fandom. Yes, the Arashi fandom is a fun community and I don’t want to spoil anyone’s fun but when I write about Arashi, or anything that I find interesting, I write it as a journalist and as a blogger, because that’s who I am. If you don’t like it, don’t read. Simple.)

I wanted to call this post: “Arashi is so great that others love to copy them”, but thought against it because though that is true, we don’t really have to spell it out like that to prove how great the boys are. All we need to do is take a look at how many others are copying their work to see for ourselves that the boys’ prime and enviable position in pop culture is not just limited to Japan.

Case #1: some obscure Kpop group called BiA4 wants to have their popcorn and eat it too. 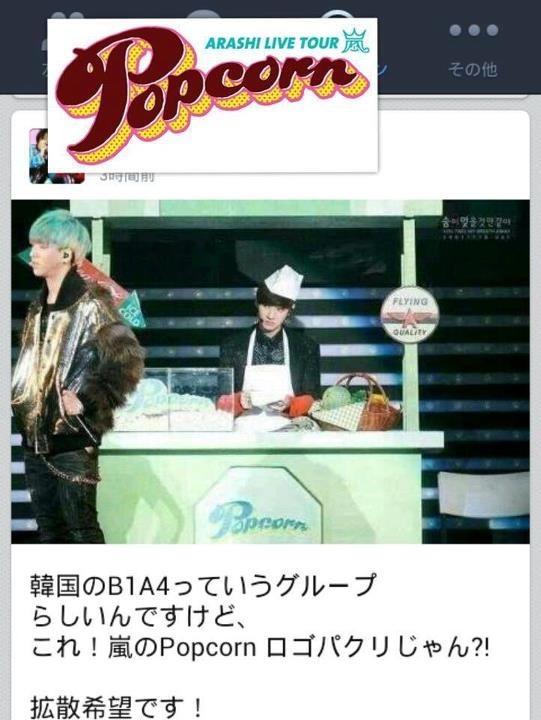 Case #3: another Kpop group, SHINEE, copies this from an Arashi concert:

And no, just because one of the members of SHINEE likes Arashi, it’s perfectly okay to copy. With regards to the logo and the OBB, those are clearly copyright violations. Concepts, however, like the one taken from the concert may fall in a grey area. The perpetrators can always cry “inspiration”.

It is very interesting that while Googling on this topic, I came across this old article about SHINEE suing a Cambodian group for copying them. Oh the irony. Perhaps they thought, heck, if you can’t beat ’em, join ’em. So here we are.

Sure, we can throw around cliches such as, imitation is the best form of flattery. But no one is really flattered, certainly not me, especially when it runs smack of creative laziness. POPCORN has just been released so it’s obviously fresh on many people’s minds, thus, this filching makes it more blatant it’s almost an insult. HnA may no longer be airing but the rights belong to TBS, so I’m waiting for the network to cry foul knowing how the Japanese can be touchy about these matters. And did I say, video-sharing website in China? This could be interesting. Lastly, Arashi works so hard to make their concerts memorable and enjoyable for their fans. It may be flattering at the onset to consider that other groups are copying them, but at the end of the day, it is still cheating.

Do these people actually think they can get away with things like this? Seriously? In this day and age of Twitter, Weibo and Facebook? Do they live in a cage? At the end of the day, who are they shortchanging and fooling? Where’s your pride guys?

Nothing beats the original. That is all.

I just have to add this. If this copying was committed by a Japanese artist to a Korean artist, hell will break loose and the Korean media will even join in the fray, dragging some nationalistic tone while they’re at it. Remember the non-invitation of any Kpop artist at Kohaku, a wholly Japanese show, complaining as if the Koreans had a stake on NHK? The same thing if it’s a Japanese artist copying a Chinese artist, all hell will break loose on Weibo. The Japanese, for all their strict policies about copyright and all, sure have poor social media networking. And as a fan of a Jpop group, I feel compelled to help point this out, as others did. Because I am proud of Arashi’s work and while all these copying make other people know more about them, I also feel it’s a disservice to Arashi’s tears, sweat and blood over the years to get to where they are. Others should work as hard and not just conveniently resort to copying and hang on to the coattails of somebody else’s hard work.

And lastly, I didn’t want to turn this into a Kpop vs Jpop vs Cpop, but given the characters involved in the issue, it can’t be helped. Bottomline is, whatever pop genre it is or whichever artist is involved, cheating is wrong. We are taught that as early as pre-school.

34 thoughts on “the art of copying Arashi”