The last episode of HIMITSU NO ARASHI-CHAN is everything why fans love these five boys. Sitting around in the living room–albeit empty as they are supposed to be “moving out” already–and just chatting like you would see friends shooting the breeze. This. Is. The. Reason. Why. Arashi. Clicks. Right there in the last episode of a show, that ironically, tried so many formats when all it really needed was to bring these five bakas in a simple setting and let them do their thing.

HnA started airing on April 10, 2008 on TBS, and was their first variety show on primetime. They had Othello as their co-hosts though only Nahomi Matsushima stayed on after Tomoko Nakajima had to go on hiatus due to personal problems. (Remember that uwasa that Tomoko-san shouted and showed her fangs to Arashi? If that was true, it could be attributed to what she was going through and not because she and Arashi did not get along.)

So the final episode starts with them coming out of their rooms with their bags, except that Ohno was just carrying a pouch. Sho-kun had “serious traveler” written all over with his luggage. Jun, imho, had the most stylish bag.

To be honest, of the three Arashi variety shows, this is the least of my favorite. And as I watched the last episode, I can see why. VS ARASHI is a straight-forward game show. ARASHI NI SHIYAGARE’s concept is clear: Arashi learning from anikis. HnA did not have that consistency. It wanted to be so many things.

Not that they were the least entertaining because the segments had their moments.

The VIP Room, which is one of my favorite segments. I just wonder how come they didn’t include that clip when Sho-chan cosplayed as a robot.

This VIP Room episode with Perfume was epic:

Of course, who can forget the equally epic Mannequin 5 and the batsu?

There was the Ranking Derby:

And the collaboration with Disney! 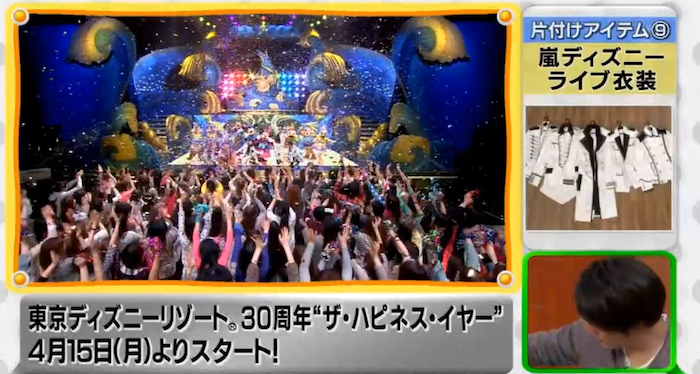 And other segments that made this show truly a hodge-podge without apologies.

It was as if in its five years on air, HnA was trying to find its groove. The only reason why people continued watching was because of Arashi, who made the show interesting despite of its limitations.

Not to say it was a failure because it wasn’t. In this day and age of reality and talent shows, it wouldn’t have lasted five years if TBS didn’t find it worthy of airing.

However, it has ran its course. And it’s time for the final photo:

I didn’t expect the tears as I watched the boys start to leave the house one by one and say their gratitude and goodbyes. (Props to the soundtrack editor for playing the corresponding theme song of the boys’ solo dramas in the background while they made their final speech.)

Goodbye, house. We will miss you.

Last look at the house:

If for anything, the animation of this show is really very good.

Like the other Arashi shows, HnA made us laugh and turned our bad days into the best days of our lives.

It’s not the end, but another beginning. Sho, Aiba and Nino have their own solo shows, and I hope that Jun and Riida will follow soon. Of course, it will not be the same without the five of them but there is still VS ARASHI and ARASHI NI SHIYAGARE. Besides, these boys have to grow individually too if they are going to strengthen Arashi further. They need to discover and learn things apart so that every time they come together, there are always new things they can learn and share with one another.

Arigatou Arashi-chan. Arigatou to the staff that supported the boys in those five years.

Open the WHITE and bubbly to celebrate!