Korean drama is biting me in the ass through THAT WINTER THE WIND BLOWS. Some of the reasons why I hate K-dramas are in it: incest (fauxcest as dramabeans calls it), a blind character, a conman, chaebol, skewed concepts of love (and I don’t even mean the incest) and lots of backstabbing and outwitting that make you wonder if this really happens in real life. But then we watch dramas to be entertained and it does serve its purpose, even if it means literally biting my nails while watching the suspense unfold onscreen. That’s entertainment, indeed, except it’s not the fun, fluffy kind which I generally prefer.

So far, episode 8 is my favorite. It plays like an extended music video with the scenes at the snow villa and that whole story arc about the bell. This episode gave us this scene: As if I haven’t recovered yet from this scene in episode 7, also involving snow. Aren’t we being snowed in? Ah, refer to Drama Title, please.

This is one drama that I could just watch what’s going on onscreen without understanding it because it’s like looking at a series of postcards or being on Instagram. 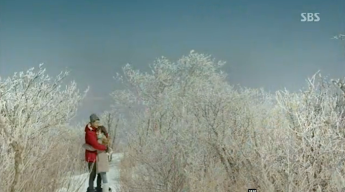 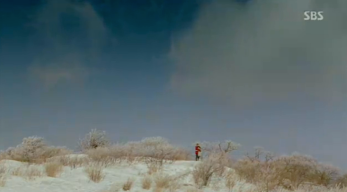 The kitchen scene, that was featured in Ye Sung’s “Grey Paper” MV, is so cute you can just melt. This and the snow mountain scene are the highlights for this episode, and they’re better appreciated being watched on video. SBS promptly blocked my fave scenes cut I uploaded on YouTube so just watch the scene from the kitchen to the snow mountain here.

Young: “To buy a present for someone.”

“Later when I leave,
even when you lose the bell…
if the winter wind blows,
the trees will always make this sound.

If only you could see this now,
it would have been really nice.
But more than this,
what I want to show actually…Young… is yourself.
More than anything, it would be this.
If you could see yourself…
because you are very, very pretty… and cool.”

And unbidden, the tears came. Not because I felt I had to cry but because I felt Oh Soo’s love that is slowly growing and manifesting itself. And he’s trying to fight it, but we know what happens when love bites. It can be rabid.

We have two kiss scenes from episode 7:

The first one is an “innocent” kiss after Oh Soo said those lines about him wishing Oh Young could see so she could see herself. Thanks, by the way, writer No Hee-kyung for such beautiful lines without being overly cheeky!

The second is an anguished good night kiss as Soo slowly faces up to the truth that he is falling in love with his fake sister that he had set out to con so he could pay his debt. (I was going: “Kiss her! Kiss her!” But of course, Soo stopped a mere breath away from kissing the sleeping Young on the lips. Damn you, drama.)

And the realization hits him full in the face the following morning when Young woke him up with a phone call singing happy birthday to him. Of course, he forgot that it was supposed to be his “birthday”. But he was in for a bigger surprise. When he saw the cake that he helped Young make the previous day, there was a bracelet with a bell on it (I want a bracelet like that!). And it dawned on him. This was the gift that she went out to buy on her own. He is the one she loves, although at this point, it could be sisterly love for her since she is still under the belief that they are siblings. But still, his reaction was painful to watch (Jo In-sung, I love you!!!).

“If I could have stopped, I should have stopped then.
My dangerous act to get close to Young was crossing the limit.
The warning sounds that were ringing from deep within my heart,
I definitely heard it.
I shouldn’t have been conceited.
I thought that I could play around with love.”

I love how writer No made the recurring theme of the entire episode centered on “bells”. The bell that he gave her which she always carries around because it gives her reassurance at night and helps make her sleep. The bell bracelet that she bought for him as a birthday surprise. The sound of the branches on the mountain top that resembled a million wind chimes (is that really true?). The “ringing” in his heart. The warning he heard from within. Oh, just lovely and poetic with the symbolisms, writer No.

All the time I was watching episode 7, I knew tragedy was about to set in. We learn that from watching too many dramas, and we know it’s the cycle of life. With all the happy moments going on onscreen, there was that foreboding that something bad was going to happen soon and we could only guess that it would have something to do with the truth behind Soo.

And so off I went to watch episode 8 with a weary heart. And indeed, the suspense was increasing with almost everyone on Soo’s case, and now, including Young, who suddenly had a change of heart and turned against him after he allowed her to take that lethal medicine (there is a difference between “making” her and “letting” her get her “death wish”). I still have to wrap my head around that sudden twist because 1) she wanted to take it in the first place; 2) he did not want to argue and provoke her when she was in a desperate stage; 3) he took out what was inside the capsule and she discovered that soon after. So what was the reason why she was suddenly against him? Was she jealous that he went out for some “business” at the time she was sick and after she took the pill? Or was this just another test for him and he failed this time? It didn’t help of course that there is Secretary Wang and that curly-haired friend from the coffee shop feeding Young more doubts about her “brother”.

I could feel Soo’s frustration as I watched this new dynamics played between him and Young, although it looked more like a lovers’ quarrel. Perhaps because the rest of us know they’re not real brother and sister anyway and we also can see how Soo was falling deeper into the trap. His frustration had nothing to do anymore on whether Young trusted him as a brother so he could get money from her, but it was coming from a man who was in love with this woman he couldn’t understand and was about to lose. He knows he’s going to lose her with the con that he did. And that scene when he kisses her forcefully on the cheek, you just know it’s the act of a man getting desperate in love. It peaks in that confrontation scene when he finally releases his anger at her, and keeps us on the edge of our seats in that cliffhanger when he comes in time to save her from gangsters and she finally breaks down and reveals that she now knows the con. Oh my god!

“It must have been so easy for you.
Why didn’t you just kill me then?
Why? Why? Why?”

Of course we know–or at least I’m hoping I know–the answer to that. And the teaser for next week’s episode does reveal his answer.

“I must really love you.”

And there’s more; she also says in the teaser:

The fleshing of Soo’s character is very well written (compared to Young’s, especially in episode 8, but we might see a clearer backstory for her part in the next episode) that one couldn’t help rooting for him so he could pay his debt, kill his killers before they kill him and get the girl. How that’s gonna happen, I don’t know but I’m a sucker for happy endings and I am still wishing that this will have a happy ending unlike the Korean movie version.

This post is ranked WHITE but I need green tea to calm myself until the next episode. Oh Wednesday is such a winter world away.

5 thoughts on “drama: THAT WINTER THE WIND BLOWS… the bell tolls”