Finally, it has happened on the first night of the year of the snake: the long-awaited reunion of F4. 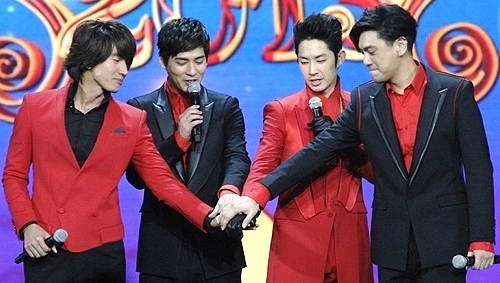 Long before K-pop idols and Johnny’s boys stepped over their countries’ borders and conquered fangirl’s hearts, when Psy hasn’t even dreamed of Gangnam Style and the flower boy nextdoor was not even a drama yet, four guys have stolen many hearts and never quite returned them. This much was obvious when F4 performed for Jiangsu TV’s CNY special and many fangirls just realized that their first loves have not died after all these years.

When we speak of F4, there is only one, or rather, there are only four. And they’re not the F4 of Japan’s HANA YORI DANGO nor Korea’s BOYS OVER FLOWERS  They are of METEOR GARDEN born: Jerry, Zai Zai, Van Ness and Ken. They may not be the original F4, but they were the F4 that trailblazed the path to F4 stardom. And thank goodness no one is insisting on calling them JVKV anymore (did the Japanese creator lose steam or was paid off?) because JVKV just does not give the same ring as F4 does.

By now, many have seen the performance and perhaps became teary eyed just like those lucky fans who were at the studio. But before the pre-recorded segment was aired, there was the rehearsal, which imo is a must-see, just because I love BTS:

If there’s one thing I noticed from then to now, F4 really provide jobs to a lot of people. Ever wondered what those people who make up their coterie do? They can’t just be groupies or mere hangers-on right? They seem to have roles to play. And they just add more to the mysterious popstar aura that surrounds the four. I guess they do serve a purpose and that is to shield the guys, perhaps, remnants of those crazy days when they were at the peak of their popularity and they couldn’t absolutely go anywhere without being followed by fangirls.

Another striking thing is, except for Van Ness, the other three live very lowkey lives. You don’t see them prancing about on their Sina Weibo accounts unlike common stars and starlets of today who seem to never get tired of seeing their faces onscreen or on billboards they just have to post their faces everywhere on social media. Sure, it’s their account and they can do anything they want with it, but I’m just making a point against camwhoring.

The rehearsal video is a perfect example. You don’t see any of the four, not even Van Ness, hamming it up for the cameras. They talk among themselves, listen, crack some jokes that only them understand, do their own thing either unconscious of the cameras or deliberately ignoring them. And while watching them, it strikes me that they haven’t just grown up and matured, but they also still behave in the pre-social media era. And somehow, I find that refreshing because honestly, it is nauseating to see actors and singers act like they are desperate for attention and camera time, when they don’t even need to be because the cameras will naturally follow them… if they are famous.

Now, let’s go to the performance, which aptly starts with Harlem Yu singing Qing Fei De Yi. This song may not be by F4 but it is very much a part of the soundtrack of that era.

Zai Zai is even more charming (he was my F4 but since I saw him two years ago at the Golden Horse looking so shuai and just glowing, he became my F2);

Ken, despite the added kilos, still looks the most rock star among them;

Van Ness is still, well, Van Ness, flashiness and all.

Xie xie Jiangsu TV for making this happen. And I hope, just like what Aya made them promise as they joined hands, there will be another F4 performance this year; perhaps a homecoming concert in Taipei? I’m so there!