While watching ARASHI NI SHIYAGARE with guest Osamu Mukai, I couldn’t help thinking it would be cool to have him and Matsumoto Jun co-star in a drama or movie. (That is, aside from other thoughts of course like how Mukai-kun seemed quite shy–though not as reserved as Eita–and how he was good-looking and so tall he made Arashi looked so ordinary beside him.)

He was always “Jun-kun” every time he needed to ask them to do a task or address them. Thus the idea of them working in a project together. It was only much later while looking for photos for this post I realized that Mukai had in fact already worked with Jun… in BAMBINO. And here’s proof: 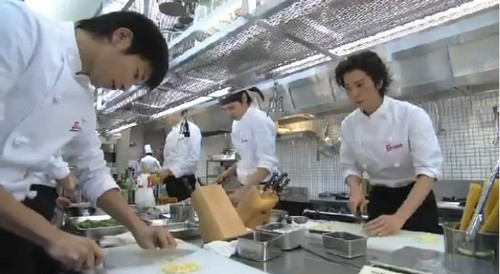 Matsujun always has this chemistry with his male co-stars.

There’s Oguri Shun he first worked with in GOKUSEN. Jun’s condition to take on the role of the iconic Domyoji Tsukasa in HANA YORI DANGO was if Shun will play Hanazawa Rui. They worked again in SMILE (Shun in a special cameo). Over the years, they’ve become bffs. 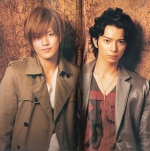 Then recently, there was LUCKY SEVEN with the surprisingly reticent Eita. It was interesting to see the genki Jun alongside what he called as a “even though he looks like this (low tension), his energy is already high” Eita. Onscreen, Shuntaro and Nitta’s verbal spars became a highlight of the detective drama.

I also read reports that Eita apparently accepted LUCKY SEVEN even if he had other commitments because he wanted to work with Jun. I am still hoping for a season 2 or a film version.

Jun and Eita may not be bffs like he is with Shun but he sure did take out the inner genki-ness in Eita. I have a feeling that Jun’s personality is the guy’s best friend type. It sometimes surprises me to know his other guy friends and he seems very good at maintaining friendships over the years.

But more than that, I always notice his chemistry with his male stars: Hiroshi Abe and that comedic sidekick in THE LAST PRINCESS; the actors who played his best friend and frienemy in NATSU NO KOI WA NIJI-IRO… I always remember his interactions with the male co-stars more than the leading ladies.

And wouldn’t it be cool for him to co-star with Ikuta Toma? After all, they already have some fashion bromance going on.

Of course, working with the rest of Arashi is a special case. Yes, I’d love to see Jun do a project with any one of them ala Sho-kun and Nino in YAMADA TARO MONOGATARI. It would definitely be interesting to see them acting as different people, and since I am either Matsumiya or Sakumoto, a drama with either Nino or Sho would indeed be very nice.

But going back to Mukai-kun, it would be great indeed if they could work together again. Mukai was just a minor cast in BAMBINO and it would be interesting for the two of them to have more scenes together, ala Jun and Eita in LUCKY SEVEN.

They could play dorks with one dork more reserved than the other. Or they could play serial killers, detectives, doctors (that seems to be the drama trend in Japan with Mukai playing a doctor in his last drama)… anything as long as they work together again.

Wanna watch Mukai interact with the rest of Arashi? Here’s the AniShi episode that spurred this post: click.