The trouble with remakes is they will always be second rate to the original, especially if the original made such an impression. No matter if you are Leonardo di Caprio or Hidetoshi Nishijima. Who? exactly.

It was no surprise that another country will remake Andrew Lau and Alan Mak’s 2002 hit (it’s been 10 years!). 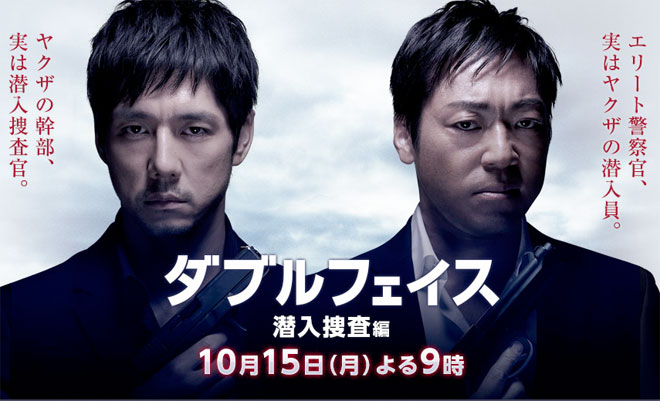 But there is one major weakness that besets Japan’s remake, called Double Face: Sennyuu Sosa Hen: the actors are greatly miscast. I cannot emphasize this enough. Super duper miscasting going on here.

– Hidetoshi Nishijima spends most of his time trying to ape Tony Leung Chiu Wai but falls short. He fails to capture the internal struggle the character is going through and only goes to show that only an actor with Tony’s caliber can do it.

– Teruyuki Kagawa does the same and equally fails in the Andy Lau role. Andy owned the role with his swagger and goody-two-shoes portrayal. Kagawa, first of all, is too stocky for the role. He is not dashing enough nor cocky enough to play the snitch climbing the ranks of the police force. Andy may not be as good an actor as Tony but he nailed the cop who masked his cockiness and ambition with false earnestness.

– Takozo Kaduno in Anthony Wong’s role just does not cut it either. First of all, he does not look like a police superintendent at all but more of an aging salaryman who’s been confined to his desk doing paperwork for years.

– Fumiyo Kohinata as the yakuza leader played by Eric Tsang in the original is a bad choice. Kohinata is known more for his comic roles and if they thought he could do an Eric, who is a known comedian himself, then clearly the casting director fell short of it. He failed to capture the tricky ruthlessness of the character.

It’s such a pity that this remake did not come up to par considering that Japan’s yakuza culture could have provided the perfect backdrop in the same way that Hong Kong’s triad did for Infernal Affairs. 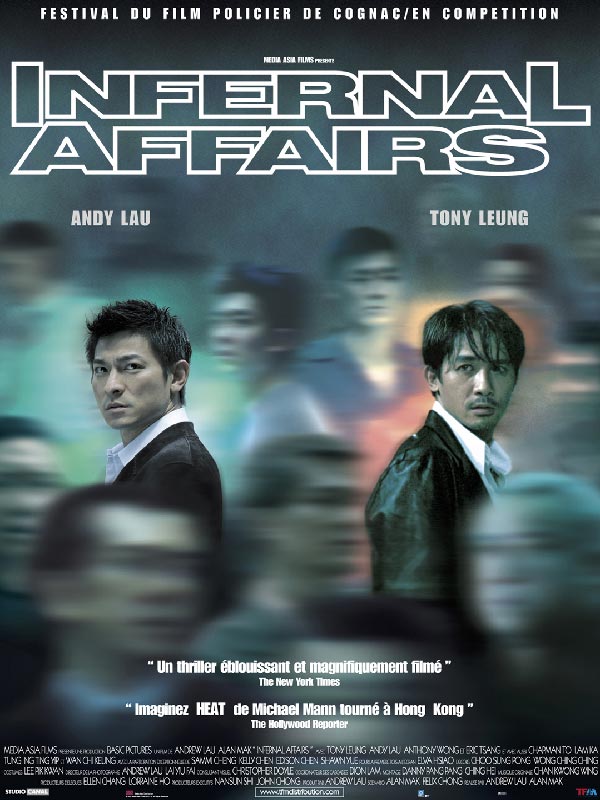 But Scorcese failed to do that trying to bring the plot to the Irish ganglands. Perhaps I’m just a loyalist to the original that I did not like even Scorcese’s version. But that is the fundamental problem when “copying” a very successful franchise. You will always end up as a poor copycat, Leo aside.

Also, there is more to Infernal Affairs than a crime thriller. At the heart of it is the Buddhist precept of eternal hell. That is what the two main characters are struggling with. That is why the portrayals and characterizations are crucial because this is not just a simple slam-bam thriller.

Also, one other element that I really liked about IA, aside from the casting coup, was the soundtrack. Music is everything in setting the mood of a scene and I still remember the dramatic soundtrack from IA. It contributed to the suspense and shock that different scenes demanded. In Double Face, it was simply lame.

I wonder though if the actors were different? If, say, Ken Watanabe played the Anthony Wong role? Or the two leads were played by better known actors? Japan is not exactly short of them but judging from the production values, this seemed quite low budget. So perhaps that explains the cast.

I haven’t even touched the female cast. The doctor played by Kelly Chen in the original looked like a housewife and while Aoi Yu in the Sammi Cheng role looks promising (she appears in the part 2), isn’t she too young to be cast as Kagawa’s fiancee? Oh and that loyal but stupid gangster played by Chapman To in the Hong Kong version, he reminded me of Nakai, who would have been perfect in the role.

I did like one thing in the Japanese version though. The jellyfish aquarium in the doctor’s office. It was the only saving grace of this drama and it makes me want to have one.

Now let’s wait for the Koreans to do their version. Good luck with that.