This drama season in Japan is very crowded with lots of interesting dramas.

There’s Perfect Blue with Takimoto Miori (who was in Hungry!) co-starring this time with a dog; Osozaki no Himawari with Ikuta Toma and a bunch of sunflowers; Going My Home with the ever reliable Abe Hiroshi; Kekkon Shinai about singles in their 30s and 40s with stars like Tamaki Hiroshi and Kanno Miho (I hope she does not overact in this as she did in Hataraki Man); Tokyo Airport an aviation drama set in Haneda Airport; and of course, Pricele$s, with the drama king himself, Kimura Takuya.

I have watched Going My Home and Tokyo Airport and since these are Japanese dramas, it takes awhile for them to get subbed, say, compared to Korean dramas. But they’re worth the wait.

Going My Home is a family drama directed by Koreeda Hirokazu whose previous works include Nobody Knows and I Wish.

This drama, however, is not for everyone especially if you are looking for melodrama with lots of convoluted plots like incest or a life-threatening disease or a romantic story that will sweep you off your feet. The plot of GMH, about a family man and his family and their daily life, may sound so mundane and ordinary but that is its charm. Watching the story unfold onscreen is like watching something so familiar. The characters are played out so real and listening to their conversations is like eavesdropping on your neighbors. There are also many funny moments, not because of any slapstick but because they really happen in real life. In short, very easy to relate.

Tokyo Airport, meanwhile, is fascinating if aviation interests you. Obviously, it’s about airports and airplanes and the people behind the scenes. 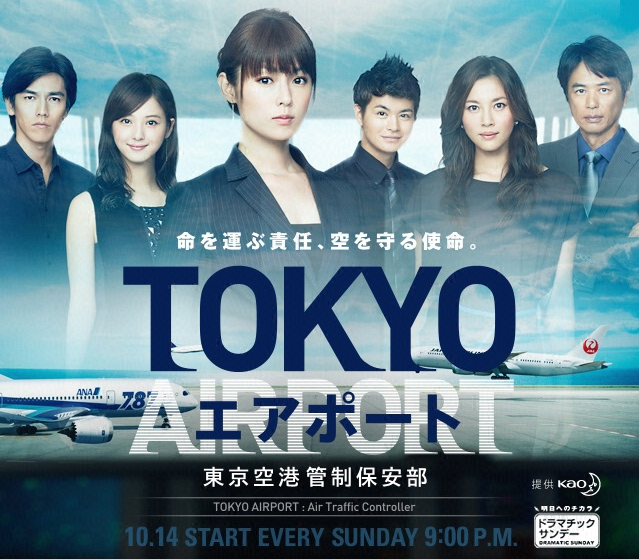 The drama is set in Haneda Airport, which handles all domestic flights to Tokyo. But it also tackles the growing traffic after its expansion and the opening of the new runway. Unlike the KimuTaku drama, Good Luck, which focused mostly on the air crew, Tokyo Airport’s main characters are those at the control tower, the air traffic controllers.

On a personal note, I find this interesting because I just had a conversation with someone who used to work at the London Gatwick Airport. He quit the job because it was just stressful managing the take-off and landing of aircrafts. At night, he couldn’t sleep thinking of the near-miss decisions that he made at work that day, that if he lagged a few seconds, it could have resulted in a crash or something. So he got out before it drove him crazy.

Tokyo Airport’s first episode tries to capture that and the breadth of the responsibility that these people standing at the glass-walled control tower has on their shoulders. But somehow, it lacked some urgency and real tension or maybe I have watched enough aviation dramas and films that nothing sets me off the edge of my seat anymore. But hopefully, the drama’s pace will pick up on the second episode.

Meanwhile, I’m looking forward to watching the first episode of Pricele$s and the other dramas I have listed. Looks like my drama schedule will be full this season and I hope they won’t disappoint!

Update: Here’s how the dramas fared in their first episodes. Perfect Blue lost  a chunk of viewers which does not bode well for the drama, Going My Home’s second episode did not air due to a sports telecast and it seems Kekkon Shinai picked up so I might watch that next.

Update 2: Just finished watching first episode of Perfect Blue. No wonder it lost audience share by the second episode. Either detective dramas in Japan has reached a tipping point or this drama is just simply lame. For me, it’s the second because if it’s a good drama, it does not matter how many detective dramas are there on TV, people will still watch it. It’s a pity because it’s different from dramas of the same genre as it attempts to put women at the forefront but the script and the directing only reinforces the convention that crime solving and action should be left to the men, which is of course a rather unfair POV.

It may also be too early to give Takimoto Miori a lead role and is greatly miscast here. She lacks the grit to play a female detective that she ends up looking like a noob. I’m sorry Masa (the ex-police detective German Shepherd who is the narrator of the story), but I can’t keep on watching this drivel. And perhaps they should have made your voice-over more engaging and not sound like an old man in a taiga drama.