I may finally be watching again a lakorn (Thai drama).

When I first started living in this country, I’d watch lakorns because I didn’t have cable. I still don’t have cable but it’s because I really don’t watch TV except when it’s World Cup or at the office for news.

And why would I go back to the world of lakorn, with their melodramatic slaps and screams? I don’t even understand Thai. But it’s because Ananda Everingham will be producing the Thai version of Autumn in My Heart. When I first saw the video of the press conference on YouTube, I thought he was going to star in it. I immediately thought he’d be perfect for the role of Song Seung-hyun, not to mention that they kind of have the same aura. But then after Googling, I found out he’s producing it. The male lead will be Tik Jesdaporn Pholdee. 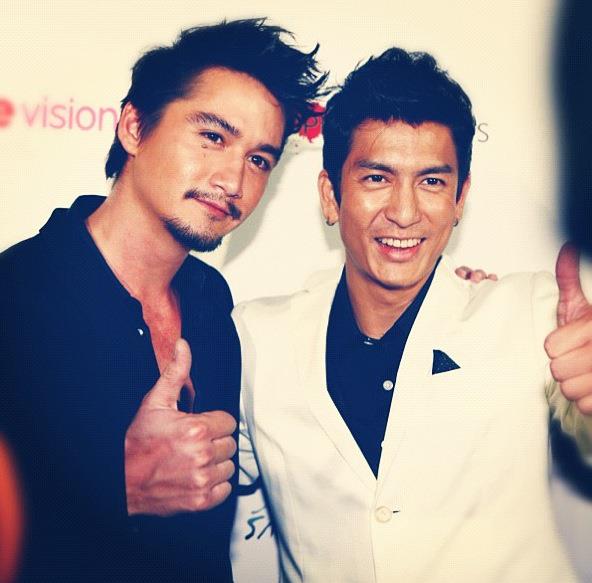 I was thrilled when I saw the photo without knowing that one is producing and one is acting. Tik is one of the few Thai actors I am familiar with. Come to think of it, he and Ananda would have been perfect in the drama together playing either the SSH and the Won Bin role. I am still hoping that Ananda will take a role in this drama. It would be nice to see him in a lakorn.

Further Googling reveals that Tik is already married. As for Ananda, he is no longer just acting but he’s also taken the role of creative director and producer of Halo Production Company.

Wah, so many things have happened since I started living here that I’m not aware about. A new friend recently told me I don’t really know the Thai culture and way of life, which can be true. I exist in a parallel universe here.

The Thai version of Autumn in My Heart, called This Love Forever, will be airing on True Channel’s True Asian Series.

Damn, do I have to get cable now?

4 thoughts on “Ananda to produce Thai Autumn in My Heart”