It’s three months away from the end of 2012 but reports are slowly coming out on who will be the host of this year’s Kohaku, NHK’s traditional year-end musical event. There are speculations that Arashi will be called to host for the third year in a row.

But just like anything else, there are lots of opinion on this.

Most fans are saying they prefer the boys to be at Johnny’s countdown, that it’s okay if they are not the hosts and just be given a performance invitation. The top reason cited is that they would enjoy it more if Arashi will be at Johnny’s countdown with the other Johnnys than be in Kohaku alongside enka singers. Borrriiiiinnnnggggg.

At least that’s the drift I got reading from the comments on this article. I won’t bother with the haters’ comments because haters will be haters. I will just focus on what seems to be a prevailing opinion among Arashi fans: that Arashi should go back to Johnny’s Countdown instead and be their own baka selves, cavorting onstage with other Johnny’s talents and wearing their kira-kira costumes, maybe?

They don’t want them here: 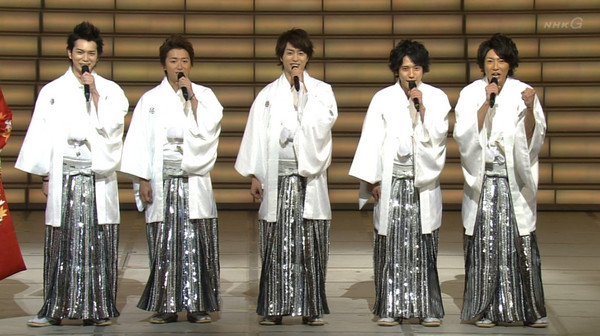 They want them here instead:

I really don’t expect fans to be smart. When we’re all blinded by “awesomeness” and spend most of our time “flailing” over our idols, our behavior can only be described as being on dope. So no, I don’t expect straight-thinking when all we want is to see our idols doing fan service instead of being serious hosting a long-time running show that most people find boring. I mean, no one wants to be bored and be induced to sleep in the last few hours of the year when we all should be greeting the new year with a bang, deshou? So maybe I can’t really blame them.

Neither do I expect fans to understand implications of what their idols do. Most of them are short-sighted and just care about the here and now. Are the songs great, the albums selling well, the concerts “awesome”? Yes, that word again because fan vocabulary appears to be limited to that. Who cares about tomorrow? As long as their idols are there preening and camwhoring for their benefit, that’s all that matters.

So no, I don’t expect most fans to understand why hosting Kohaku is an honor for Arashi. The first time they hosted it in 2010, The Japan Times proclaimed it as proof that the boys’ stardom is no fluke, that it was a recognition of their star power. I guess that is too much for shallow fans to fathom. And the fact that they were called in for an encore is proof that the old guys at NHK liked their job (they managed to pull up the ratings of the languishing show). If they get called in this year, it further boosts their CV. (Rumor has it that the boys have a five-year contract with NHK to host the year-end event.) But of course, fans would rather that they go to Johnny’s countdown and be among the many idols, famous or has-beens, competing for camera time. That is more prestigious for them, I suppose. Being alongside respected names in the industry? Oh that’s just so boring. Who cares?

But who watches Johnny’s countdown anyway, aside from JE fans? Truth be told, a lot of Japanese sneer at Johnny’s. They haven’t forgotten those stories about the agency and the rumors that continue to swirl about it. Of course, the Japanese are not only the television audience in the world. But then, don’t forget that these two events are still Japan broadcasts. So at the end of the day, ratings and prestige considered, what would matter?

So to paraphrase James Carville: It’s the prestige, stupid.

One thought on “Arashi: Kohaku or JCD?”