Not too long ago–actually in July–NTT Docomo surveyed fans on which Johnny’s group they think gets along very well. The results, which could be read here, were not surprising. Coming out on top was of course Arashi. 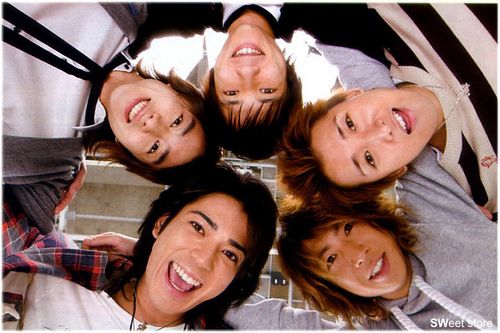 What interested me though were the comments on that article. Many of the fans noted that “something is lacking” in Arashi these days and that they don’t seem as close to each other unlike before, comparing them to Kis-My-F2 (or was it another younger group) who “even went to Disneyland” together. Honestly, I LOL-ed when I read some of the comments.

I don’t know Arashi more than what I see on TV. But I know them better than the others because I watch them a lot. These guys have been together even before they debuted in 1999, well, just like most idol groups who trained together. It’s safe to say they grew up together and went through adolescence, which can be a tough time, and are still together now as adults in the most bankable Johnny’s group at present.

Now, are they different from before? Of course they will be different from before. People grow up. They’re no longer kids like Kis-MyF2 who may be too eager to show some bromance and prove to their fans that hey, we are really close! Ohno is already 30. Do we still expect him and the others to behave like teenagers, being all over each other, happily sharing stories on variety shows that otherwise should be kept out of the public? They’ve grown up and matured and know more than what they knew then, ‘s all.

Why don’t they go out together now? They still do, just not all five of them all the time, which is understandable given their schedules and the fact that aside from Arashi, they have individual careers. But it does not mean that they are no longer “close” just because they don’t go out anymore. How juvenile is this point-of-view. There are people who don’t see each other for a long time and yet when they do, they just pick up from the last time as if time hasn’t passed them. Not that Arashi don’t see each other often because they work together. So what’s the problem? Besides, if they do go out together and have some fun, do you think at their status, they would make themselves visible and an easy target for the paparazzi?

Now for those who believe that the Arashi closeness is all for show… well, you can’t fake something for 13 years and going. Something will have to give sooner or later if it’s not for real. And these boys do realize that one of their selling points is their chemistry on-and-off camera they would be foolish to throw away all the success that they built through the years because of just one little disagreement. As Jun said before, it’s not that they agree all the time; they do have their disagreements but they settle it in a low-key, mature way by talking. Besides, if you’ve been watching Arashi, it’s so obvious to see their differences–in personality, preferences, opinion. But they have a way of skirting around those differences and making things work. At the end of the day, no one can take away the bond that they already have.

All these things I am saying… it’s common knowledge and may be akin to boring. Why not let’s talk about the idol groups particularly in the K-pop industry? Now, you’re talking.

As someone fascinated with group behavior (I’m still a sociologist at heart), the dynamics among members of idol groups is a very interesting study for me. And I’m not really surprised that there is in-fighting given the cut-throat world of entertainment, especially when there is no certainty whether your group is going to survive. What strikes me among K-pop groups is, it’s like a survival game, like a reality show. It’s a given outcome especially when you have K-pop groups debuting every 4minute at 1pm or 2pm to such a small market. That’s why they’re branching out to the rest of the world just like Chinese-made products. And somewhere along the way, something’s gotta give. Someone’s going to fall. And the T-ara case is a very good example.

So much has been said about the T-ara break-up and this, this and this give us very good analyses on the situation.

All I can say is, this is the reason why Johnny-san doesn’t want to manage girls. They can be catty and troublesome, given hormonal changes etc. If something like that happened to T-ara, it makes you wonder what goes on behind the scenes in Girls’ Generation and those other interchangeable K-pop girl groups.

But then, that doesn’t mean boys don’t fight too. We’ve heard of the Super Junior confession about infighting, right? But disagreements are normal, we don’t have to like everyone else and agree all the time. Some are maybe just lucky to work with people they like and share the same views with. But that doesn’t mean they don’t go through bumpy roads. It’s just that some are able to get past that rough patch while others, like T-ara, couldn’t. And if you’re in an idol group, perhaps it’s best to have a manager who can handle it well and not make the situation worse than it is. This makes me think that Johnny-san’s heavy-handed management works most of the time (although some fans of NEWS and KAT-TUN may disagree).

The bottom line is… idol groups are human. Just like the rest of us, we fight, make up, move on. Some, however, break up forever. While some, like Arashi, fight together.

You have worries right now, right?
You have times when you are down, right?
But if there’s somewhere in the future where we can laugh together
Then a path can be made

The rest of the lyrics here.

Now, that is the fight we need. Not catfight nor fistfight. Just ganbarre!

And that is why I love Arashi songs, they are positive and not just about taxis, being sexy, single and free. But that’s for another blog.