A Japanese tabloid has come out with another article about the rudeness of Sakurai Sho to fans at a train station.

When I read the article, I didn’t know whether to laugh or cry. Laugh at the whole absurdity of it or cry that some people go to great lengths to do this.

Just a note on the translation:

On March 11th, around the time of last year’s Tohoku Earthquake, Sakurai Sho visited residents of the Aizuwakamatsu area of Fukushima, in order to tape a broadcasting of Nippon’s Television “Fukkou Terebi Minna no Chikara”.

It should have instead said: “On the first anniversary of the Great Tohoku earthquake” to avoid misleading the reader that it happened last year as “around the time of last year’s Tohoku Earthquake” implies.

– So okay, this post suggests that Sho was indeed in that area for a TV show. Granted it did happen, perhaps there is a problem with the public too. You expect someone who’s there to do work related to the disaster to put on a happy face? What’s wrong with you people? He’s not filming VS Arashi or Himitsu no Arashi-chan. He’s filming a bloody commemoration of the March 11 disaster. People would have hated him more had he smiled as if it was a happy occasion. I was in Tokyo that time and I tell you, it wasn’t a happy day. And that was Tokyo. He was in Fukushima.

– Also, the fans had their phones, right? Then show the proof and not hide behind allegations. In this day and age, nothing is sacred anymore, just ask Jaejoong.

– And goodness, fangirls need to give space and respect celebrities. As Aiba’s favorite line goes: “Read the atmosphere.” This ain’t a fan meeting for crying out loud.

And I say this based on a personal encounter. Sho is not rude. Of the Arashi members, he is in fact the most sociable. Of course when we encountered him with Aiba, Nino and Ohno at the Olympic stadium in Gwangju for the Asian Song Festival a few years back (we were there to cover, they were there to perform), they were in foreign territory and not in Japan where they have this no-photo rule. But still, they had bodyguards hanging around and in fact, those bodyguards cut our Arashi encounter short. But we managed to have photos with Sho and Aiba and it was even Sho who went out of his way to ask where we came from. So to say he is rude is just preposterous.

If you wanna talk rude, then let’s talk about Jay Chou. I am a fan of Jay, as much as I am of Arashi, but I say this–Jie-lun has been getting on my nerves lately. There’s no doubt that he’s talented and perhaps the biggest star in Taiwan at the moment. But that doesn’t mean he can get away with rudeness.

Of course, his run-ins with the paparazzi is no longer new. He has hated them from way back, called them dogs and even composed a song about them. It’s either he hates them that much or they’re important to him so he bothers. But it’s no excuse to behave badly in public especially when the root of this conflict is his challenge for the papz to take a photo of him and Hannah Quinlivan from the front, with their faces clear and in return, he will grant an exclusive interview.

He should have known that the people he calls “dogs” won’t back down from this kind of challenge. In short, he brought it upon himself. He should have known better but he wanted to act all cocky and taunted them. He forgot that dogs can be rabid and they’d bite him in the butt. So what happened? He got angry when they did and thought that by turning the tables on them, he was being Batman. (Someone asked: “Isn’t he Pandaman?”) 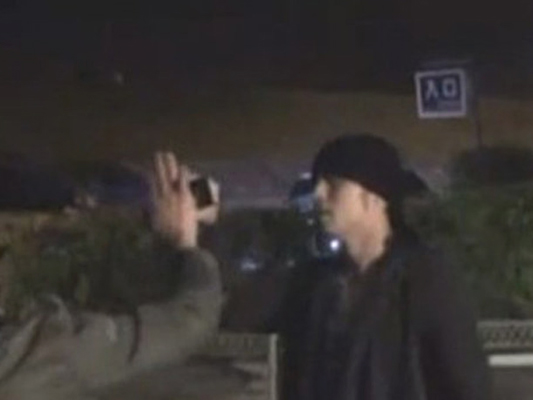 Read the articles here and here.

He went on to accuse the papz of chasing him all over town so they could get fat bonuses at his expense. Well, isn’t the kettle calling the pot black. Don’t celebrities like him thrive on the attention they get from the media, and that publicity brings them notice from producers, advertisers and fans alike? Or Jay Chou thinks that he’s above all that?

Well, apparently he thinks he does not need the media. Just an example based on personal experience: Two years ago, GIO was making arrangements for me to interview celebrities in Taiwan during a visit. One of them was Jay Chou. They asked me to submit questions in advance as SOP sometimes with these celebrities and they sent the same to his management. Jay’s female assistant called the GIO officer back and as the guy described to me, she was very rude and said something along the lines of: “How dare you send the questions when I haven’t  even given the go-signal yet? If you want to interview him, then you should pay!”

It would have been acceptable if they turned down politely because after all, I am not CNN or E News Channel.

So yeah, bonuses at his expense? Perhaps Apple Daily should just pay him or maybe buy him a Batcave in return for an exclusive and not bother chasing him around. Everybody happy.

This is not a post of a bitter journalist who didn’t get her interview. With that kind of attitude? Forget it. I haven’t even been able to write about my interview with Ken Zhu because I couldn’t get past his snootiness… so Jay Chou? No thanks. I want interviews to be a pleasant experience, not a harrowing one, nevermind if they’re superstars.

Rather, this is a post of someone who had a personal experience–no matter how short–with Sho to say his mother raised him well; and someone who likes Jay Chou’s music but thinks that his mother Ye Hui Mei didn’t teach him enough.