This ought to be photo of the day, Chow Yun-fat taking the MTR in Hong Kong (photo via @TheGoldenRock, credit as tagged): 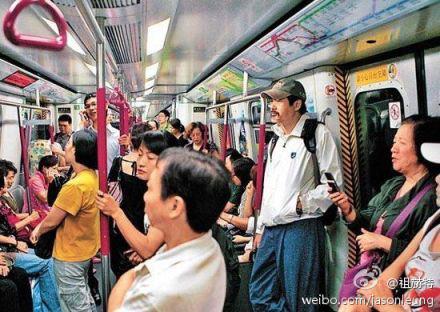 It’s no big deal actually. In Hollywood, actors take the subway and buy their own coffee. It’s only in Asia that stars are somewhat pampered, driven around in chauffeured cars with bodyguards ready to pounce on stans (of course Brangelina got those too). But in Taiwan, it’s very common to have stars take those charming yellow taxis that’s very Noo Yohk or even the convenient MRT.

It’s amusing how someone said on Twitter that Chow Yun-fat commutes in HK but he quit John Woo’s Red Cliff before due to “excessive demands”. Officially, it was said that he wanted the script to be delivered to him ahead of time so he can prepare since he’s not that good in Mandarin (I say, the thing about screenplay being delivered ahead of the filming should be industry standard). But the grapevine said his demands had something to do with “Hollywood standards” like a huge percentage of his talent fee as downpayment and a share in worldwide earnings. I also read about on-set treatment like accommodation and transport. Well he’s Chow Yun-fat, be ready to roll the red carpet, ‘ayt?

I wonder if Fatt Kor is just preparing for a role though that’s why he’s gone pedestrian for the day?

Anyway, this still made my day!