Something funny happened when I watched Seediq Bale part 1 (Flag of the Sun) and 2 (Warriors of the Rainbow). 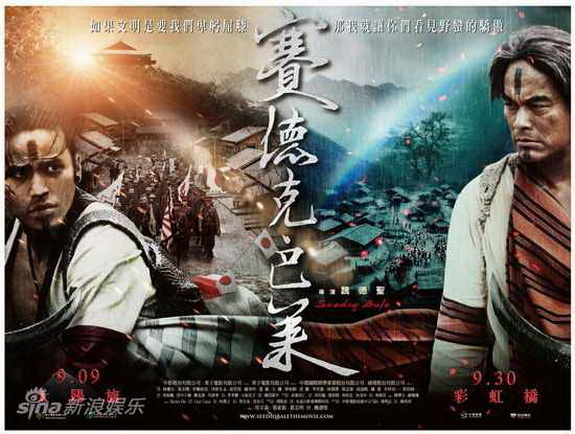 I watched it in a small cinema in Ximending and it did not have English subtitles, which I found strange because all of the local films I watched in Taipei all had subtitles.

So anyway, I sat there alone as my friends all had work, in the middle of older Taiwanese who trooped inside the cinema eagerly. Film, like music or any form of art, goes beyond any language barrier. But where there is a need for context, there is a need for translation.

I pretty much understood what was going on onscreen most of the time; I’ve read background on the film, it’s about an indigenous warrior who leads his tribe in fighting against the Japanese. The name of the brave warrior was Mona. He was a tall, dark young man with sharp features. No one will forget his mere presence.

The first part ended with a shot of an old warrior standing by a flagpole where the Japanese flag is waving (if I remember it correctly). I was already wondering what happened to Mona as I walked out of the cinema for an hour-long break before proceeding to the screening of part two. I thought the second part might answer my question.

And I got distracted looking for Mona and wondering where he went and who were these new warriors fighting the Japanese now. I’m sorry, I think the cold Taipei weather froze my brain that time and the hot choco I brought inside the cinema did not thaw it.

So afterwards, I asked my Taiwanese didi (younger brother) what happened to Mona in part two. He said: “Jie! Twenty years have passed. He grew old! He’s that old guy there!” We had a good laugh after that and until now, I still laugh whenever I think of my stupidity.

Anyway, my didi is not the kind to watch epic films like Seediq Bale but he did, like most Taiwanese, because he knows that it’s important in the country’s history. He even went to the film’s location in Linkou, which has been turned into some sort of a tourist attraction (that I will blog about later) and bought the comic book as a show of support.

As it is Seediq Bale was made possible by the support of many Taiwanese who believed in the project, including famous celebrities like Jay Chou, Jerry Yan and Vivian Hsu. Vivian has a short role in the film as one of the Japanese wives and her mother did some of the costumes. Needless to say, Seediq Bale was a labor of love for those Taiwanese who want to raise their identity in the world. The only problem is, as film producer and critic Peggy Chao said, it became too unwieldy. Fours hours is not really the reflection of a grand production but perhaps lack in keeping the script tight, that is why the budget ballooned to US$25 million.

But congratulations is in order as the two-part film made it to the short-list for foreign language films at the Oscars. It’s just a step away from a nomination. Will it get nominated? I hope it does, for the sake of Taiwan films, of Asian cinema.

Though once it gets that coveted nomination, let the debate on whether it should be recognized as a film from “Taiwan” or “Chinese Taipei” begin.