I’m still here Qin Zi Qi and Shen Xing Ren. And I’m both sad and happy to know that there are only three episodes left before we see the end. Sad because Office Girls is really a fun watch, without the office witch and the draggy parts. Happy because I really want to see the story moving forward, curious as to how the writers will resolve QZQ’s identity.

I’ve heard feedback, especially from @marylngoh that it’s not worth wasting my time, so I kept away not wanting to ruin the drama with an episode that is not meant to do anything but stretch it till SETTV has its fill of the ratings game.

But episode 20 is so back, baby. The main plot points are starting to unravel because after all, Office Girls is about a plain, well, office girl who toils hard so she could buy her mother a house, and a cocky retail heir who was forced down the totem pole of his father’s corporation to teach him a valuable lesson about life and hard work.

In the process, office girl has lost her savings due to a carelessness and now her mother, for whom she dreamed of buying that house, is dying. Rich heir, meanwhile, has eschewed his spendthrift ways and has shown maturity by actually showing responsibility and excelling at work, and now, even ready to give up the chance to inherit his father’s fortune–something he was keen to have his hands on at the beginning–for the sake of saving the mother of the love of his life.

Roy Qiu has always played serious, broody roles so the character of Qin Zi Qi is quite a change of pace for him. He looks like he’s enjoying himself indeed and it’s a joy to watch him. But his root has always been in melodrama and it’s obvious in episode 20. While he captures the right comic timing and naughtiness of his character, he shines in quiet moments when what is required of him is subtle acting that shows his transformation from a brat to a grown-up man. Just like in this scene with his mother when he asks for help and she tells him to break up with Shen Xing Ren. 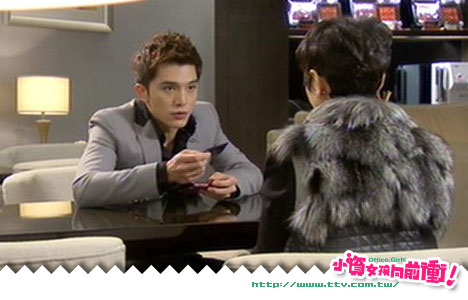 He is delighted when his mom tells him she’s giving money as a gift… and the change in his expression when she imposes the condition that he breaks up with Xing Ren is just so… wow. In just a few seconds onscreen, Roy is able to translate expressions of hope, happiness, disappointment, even a hint of longing that maybe he can give in to his mother for this chance to help Shen Mama, but no, he can’t and there’s the pain of knowing that his own mother won’t help him and so with reluctance that grows into determination, he finally turns her down.

(Not sure if the videos will play because Sanli’s army has swooped on YouTube.)

I also like the scene when he arrives at the hospital and he listens to Shen Xing Ren and Shen Mama talk inside the room about their future kids. There’s no unnecessary bawling or sobbing like one would see in K-dramas with an actor standing outside the hospital room where a beloved lies dying. Even the acting of Alice Ke and the actress who plays the mother are subdued and not over the top.

My favorite support character in this drama is Qin Baba. I like the way he challenged his son to stake on a wager with him. And he’s not the stereotypical ruthless businessman in dramas, he has a soft heart, especially for his son except that he knows it is absolutely necessary to teach him a tough lesson about life first if he was going to inherit the business he has painstakingly built. I love Qin Baba (and couldn’t help wondering what’s his backstory with the vain Madam Qin who does nothing but strut around and meet fellow witch Zheng Kai Er in her very free life; but I’m not surprised either that they divorced).

What I missed in this episode though was that background marching music everytime Qin Zi Qi would meet his father. It always had a hilarious effect but I suppose it wasn’t appropriate in this scene.

And once more, Roy shows that subtle acting again that comes from within when he tells his father his choice between his inheritance or Shen Mama. No histrionics, no bulging of the pupils like they would pop out, no vein popping either.

The last three episodes should be exciting to watch. More than waiting for the retribution of the witch, I am looking forward to the implications of Qin Zi Qi’s decision on his real identity and how this will affect his relationship with Xing Ren.

Dear Office Girls writers, except for that draggy patch–which may not be your own choosing but that of the network–you have been innovative and creative in telling a story oft told. Surprise and impress your audience with the last three episodes, hao bu hao?

Qiu Ze, I understand more now why you are so hot, with this episode. Why you act so good?