I was really excited to watch Starry Starry Night being a fan of Jimmy Liao. I was curious to see how his gorgeous artwork and touching story would translate onscreen.

The movie is directed by Tom Lin Shu-yu, who also directed Winds of September. Had I watched WOS before this, I would have been worried about SSN and whether it will be turned into a gritty coming-of-age film as well.

It’s reassuring to see that the feel of the two movies are dissimilar, although they both evoke that melancholic feeling.

Lin was quite faithful to the Jimmy Liao creation and wonderfully mixed magical realism to bring the story about a girl named Mei, whose parents are on the brink of divorce, and a quiet boy named Jay (Zhou You-jie with his English name as “Jay Chou”) who has his own family issues. They became friends and went on what they would consider as their most memorable summer when they hiked to the mountains to look for her grandfather’s log cabin.

Some of my friends liked this film better than You Are The Apple of My Eye. And one pointed out that the girl in the film, Xu Jiao, is the same actress in Stephen Chow’s CJ7. Of course I was clueless since I didn’t watch that film, but it’s nice to see that she is growing up beautifully despite being in that awkward stage. Will she be the Emma Watson of Taiwanese cinema? I certainly hope so. 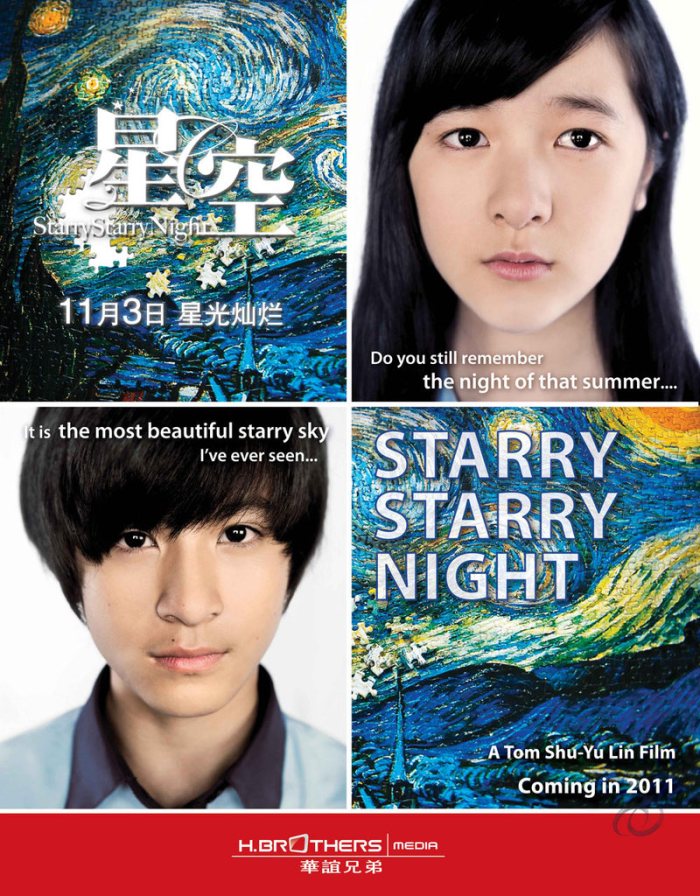 Starry Starry Night also boasts of big-name support cast led by no less than Rene Liu. The others are Harlem Yu, Stone of Mayday and Janel Tsai as the boy’s mother. I really am liking Janel as an actress, she usually plays support but she owns all her roles and though she appears in a few scenes here, her performance is just as memorable.

The grown-up Mei is played by no less than Gui Lun-mei. (Trivia: Gui Lun-mei majored in French at Tamkang University.) That final scene leading to the sort-of-a-cliffhanger of an ending was touching as she stared at an unfinished puzzle. Since I’ve watched her in Blue Gate Crossing with Chen Bo-lin, my money has always been on Gui Lun-mei growing up to be one of her generation’s best actresses.

Someone did some kind of an MV of the key scenes in the film, with English subtitles:

The production has a French feel to it, not least because the ending is set in Paris, and there are references to the French capital because Rene Liu’s character works as an art dealer. Not my favorite city in the world with dog poop everywhere but I can understand people’s fascination with the romance that it evokes.

Watch the film with English subtitles starting with this link.

This is a perfect movie for Christmas as the beginning and ending are set during this season (I love how they have scenes where Gloria in Exelcis are sung both at the first and last part of the films). It also reminds us of family ties–especially of that loving grandfather we once had–and what it’s like being a kid. As they say, Christmas is for kids.

All in all, a melancholic but heartwarming film.