I’ve been busy with many things I forgot to check if my article on Ariel Lin came out on The China Post today. They don’t upload the features section online so I had no way of knowing. I only confirmed tonight when my friends in Taipei told me it came out and a colleague sent me the PDF. 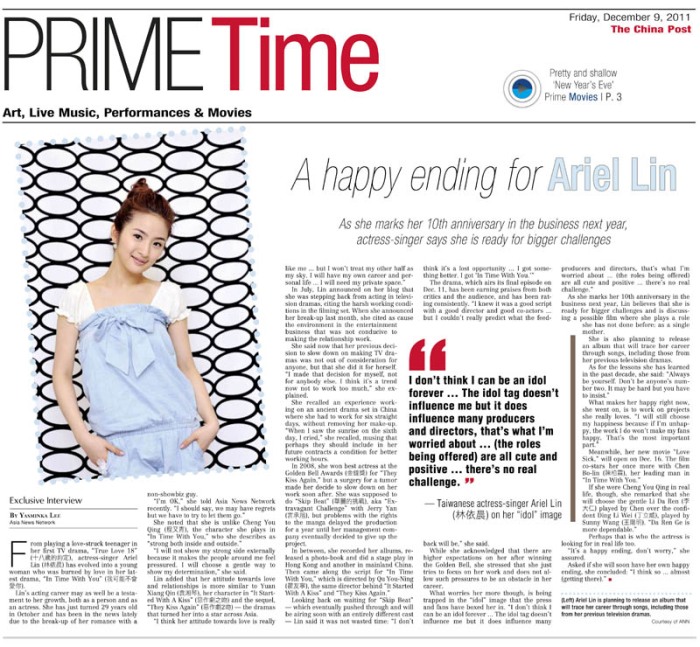 I didn’t realize it’s this short. The previous articles I have written for CP took the entire page.

Since the newsprint is hardly readable, I’m reprinting the article from The China Post below.

I don’t think I can be an idol forever … The idol tag doesn’t influence me but it does influence many producers and directors, that’s what I’m worried about … (the roles being offered) are all cute and positive … there’s no real challenge. — Taiwanese actress-singer Ariel Lin  (林依晨) on her “idol” image

From playing a love-struck teenager in her first TV drama, “True Love 18” (十八歲的約定), actress-singer Ariel Lin (林依晨) has evolved into a young woman who was burned by love in her latest drama, “In Time With You” (我可能不會愛你).

Lin’s acting career may as well be a testament to her growth, both as a person and as an actress. She has just turned 29 years old in October and has been in the news lately due to the break-up of her romance with a non-showbiz guy.

“I’m OK,” she told Asia News Network recently. “I should say, we may have regrets but we have to try to let them go.”

She noted that she is unlike Cheng You Qing (程又青), the character she plays in “In Time With You,” who she describes as “strong both inside and outside.”

“I will not show my strong side externally because it makes the people around me feel pressured. I will choose a gentle way to show my determination,” she said.

Lin added that her attitude towards love and relationships is more similar to Yuan Xiang Qin (袁湘琴), her character in “It Started With A Kiss” (惡作劇之吻) and the sequel, “They Kiss Again” (惡作劇2吻) — the dramas that turned her into a star across Asia.

“I think her attitude towards love is really like me … but I won’t treat my other half as my sky. I will have my own career and personal life … I will need my private space.”

In July, Lin announced on her blog that she was stepping back from acting in television dramas, citing the harsh working conditions in the filming set. When she announced her break-up last month, she cited as cause the environment in the entertainment business that was not conducive to making the relationship work.

She said now that her previous decision to slow down on making TV dramas was not out of consideration for anyone, but that she did it for herself.

“I made that decision for myself, not for anybody else. I think it’s a trend now not to work too much,” she explained.

She recalled an experience working on an ancient drama set in China where she had to work for six straight days, without removing her make-up.

“When I saw the sunrise on the sixth day, I cried,” she recalled, musing that perhaps they should include in her future contracts a condition for better working hours.

In 2008, she won best actress at the Golden Bell Awards (金鐘獎) for “They Kiss Again,” but a surgery for a tumor made her decide to slow down on her work soon after. She was supposed to do “Skip Beat” (華麗的挑戰), aka “Extravagant Challenge” with Jerry Yan (言承旭), but problems with the rights to the manga delayed the production for a year until her management company eventually decided to give up the project.

In between, she recorded her albums, released a photo-book and did a stage play in Hong Kong and another in mainland China.

Then came along the script for “In Time With You,” which is directed by Qu You-Ning (瞿友寧), the same director behind “It Started With A Kiss” and “They Kiss Again.”

Looking back on waiting for “Skip Beat” — which eventually pushed through and will be airing soon with an entirely different cast — Lin said it was not wasted time: “I don’t think it’s a lost opportunity … I got something better. I got ‘In Time With You.’”

The drama, which airs its final episode on Dec. 11, has been earning praises from both critics and the audience, and has been rating consistently. “I knew it was a good script with a good director and good co-actors … but I couldn’t really predict what the feedback will be,” she said.

While she acknowledged that there are higher expectations on her after winning the Golden Bell, she stressed that she just tries to focus on her work and does not allow such pressures to be an obstacle in her career.

What worries her more though, is being trapped in the “idol” image that the press and fans have boxed her in. “I don’t think I can be an idol forever … The idol tag doesn’t influence me but it does influence many producers and directors, that’s what I’m worried about … (the roles being offered) are all cute and positive … there’s no real challenge.”

As she marks her 10th anniversary in the business next year, Lin believes that she is ready for bigger challenges and is discussing a possible film where she plays a role she has not done before: as a single mother.

She is also planning to release an album that will trace her career through songs, including those from her previous television dramas.

As for the lessons she has learned in the past decade, she said: “Always be yourself. Don’t be anyone’s number two. It may be hard but you have to insist.”

What makes her happy right now, she went on, is to work on projects she really loves. “I will still choose my happiness because if I’m unhappy, the work I do won’t make my fans happy. That’s the most important part.”

Meanwhile, her new movie “Love Sick,” will open on Dec. 16. The film co-stars her once more with Chen Bo-lin (陳柏霖), her leading man in “In Time With You.”

If she were Cheng You Qing in real life, though, she remarked that she will choose the gentle Li Da Ren (李大仁) played by Chen over the confident Ding Li Wei (丁立威)). “Da Ren Ge is more dependable.”

Perhaps that is who the actress is looking for in real life too.

Asked if she will soon have her own happy ending, she concluded: “I think so … almost (getting there).” ■